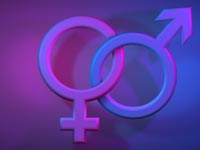 For this entry in the continuing series, we'll look at the differences in taste between men and women. We seek different types of entertainment, pastimes, and edification. Its such a broad subject, men’s and womens’s taste in movies and television will have to be addressed separately. Today, lets talk about the printed word, whether in books, periodicals, or online.

For women, the printed word can be all things and anything. Its perfectly suited to a woman’s imagination, which can paint a better picture than any photograph or illustration. Men read for information. Men who read a lot tend to lean heavily toward history, theology, engineering, and other non-fiction. The glaring exception is science fiction, which is after all, sort of science. For men, emotional topics are better served up through visuals, i.e. movies. This difference between men and women goes a long way toward explaining how woman can enjoy erotica with no pictures; therefore maintaining the fantasy that she does not indulge in erotica (see Romancing the Novel).

Remember to reread what has been written each time in order to keep the story coherent. There is to be absolutely NO talking and anything you wish to say must be written on the paper. The story is over when both agree a conclusion has been reached."

At first, Laurie couldn't decide which kind of tea she wanted. The
chamomile, which used to be her favorite for lazy evenings at home, now
reminded her too much of Carl, who once said, in happier times, that he
liked chamomile. But she felt she must now, at all costs, keep her mind off
Carl. His possessiveness was suffocating, and if she thought about him too much her asthma started acting up again. So chamomile was out of the
question.

Meanwhile, Advance Sergeant Carl Harris, leader of the attack squadron now in orbit over Skylon 4, had more important things to think about than the neuroses of an air-headed asthmatic bimbo named Laurie with whom he had spent one sweaty night over a year ago. "A.S. Harris to Geostation 17," he said into his transgalactic communicator "Polar orbit established. No sign of resistance so far..." But before he could sign off, a bluish particle beam flashed out of nowhere and blasted a hole through his ship's cargo bay. The jolt from the direct hit sent him flying out of his seat and across the cockpit.

He bumped his head and died almost immediately but not before he felt one last pang of regret for psychically brutalizing the one woman who had ever had feelings for him. Soon afterwards, Earth stopped its pointless hostilities towards the peaceful farmers of Skylon 4. "Congress Passes Law Permanently Abolishing War and Space Travel," Laurie read in her newspaper one morning. The news simultaneously excited her and bored her. She stared out the window, dreaming of her youth, when the days had passed unhurriedly and carefree, with no newspapers to read, no television to distract her from her sense of innocent wonder at all the beautiful things around her. "Why must one lose one's innocence to become a woman?" she pondered wistfully.

Little did she know, but she had less than 10 seconds to live. Thousands of miles above the city, the Anu'udrian mothership launched the first of its lithium fusion missiles. The dim-witted wimpy peaceniks who pushed the Unilateral Aerospace Disarmament Treaty through the congress had left Earth a defenseless target for the hostile alien empires who were determined to destroy the human race. Within two hours after the passage of the treaty the Anu'udrian ships wer

e on course for Earth, carrying enough firepower to pulverize the entire planet. With no one to stop them, they swiftly initiated their diabolical plan. The lithium fusion missile entered the atmosphere unimpeded. The President, in his top-secret Mobile submarine headquarters on the ocean floor off the coast of Guam, felt the inconceivably massive explosion, which vaporized poor, stupid, Laurie and 85 million other Americans. The President slammed his fist on the conference table. "We can't allow this! I'm going to veto that treaty! Let's blow 'em out of the sky!"

This is absurd. I refuse to continue this mockery of literature. My writing partner is a violent, chauvinistic semi-literate adolescent.

Yeah? Well, you're a self-centered tedious neurotic whose attempts at writing are the literary equivalent of Valium. "Oh shall I have chamomile tea? Or shall I have some other sort of F***ING TEA??? Oh no, I'm an air headed bimbo who reads too many Danielle Steele novels." 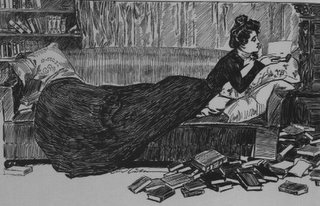 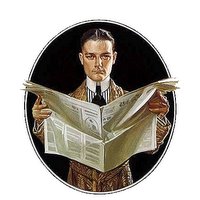 How men differ from woman on internet usage.

Now that so many men and women are keeping online journals, it easy to spot the difference between men’s blogs and women’s blogs.

Sometimes there's a fine line between a blogroll and a little black book.


Which literature classic are you?
brought to you by Quizilla

Umberto Eco: The Name of the Rose. You are a mystery novel dealing with theology, especially with catholic vs liberal issues. You search wisdom and knowledge endlessly, feeling that learning is essential in life. 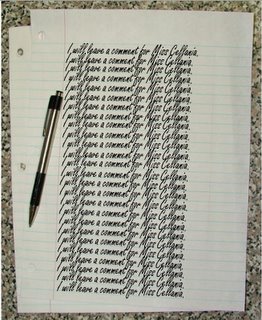 I loved the literary exercise, a perfect example of the difference between men and women. ROFL thanks for the laugh to start my day!!!!!!!

I never fell in love with my eyes.

However, I do have a particular fondness for my cock.

That's priceless :-)) Having the slanging match on record is fantastic!

BTW thanks for submitting the link to this post on eatmyhamster.com!

I hate to divide rabbits like this (yeah, right!), but if Gary was to Rebecca's right, why wasn't he collaborating with the person to HIS right, as the instructions mandated?

Women read for imagination and men read for information. Hadn't thought about it that way, but I think that sums it up pretty succinctly.

TSB, I figured you would get a kick out of this.

Carl, I meant what you USE to fall in love with... in which case, you are most likely still right. I can always count on you to use explicit language to say what everyone's already thinking.

Scott, thanks for the referrals! I've enjoyed eating your hamster...

Joel, I wondered that myself. Really.

Hoss, I have no idea what you are talking about.

FTS, you'll find that I am a master at boiling a concept down to its utmost succinctness.