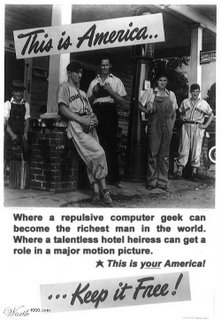 Its been too long since I’ve posted any computer jokes! Maybe because my own computer has become a running joke. Who ever heard of a blogger who can’t load her own site? I’ve got geeks from all over the world pondering this with no answers so far. Do I get some kind of award for coming up with the unsolvable problem? I'm sure some of these guys would rather see me just find a new pastime so I'll leave them alone! But really, thanks for your consideration and your time and trouble (y'all know who you are).

Bill Gates wrote a book called “The Road Ahead”, predicting what computer technology would produce in ten years. That was in 1995. Read which predictions were spot on and which weren’t. (hint: Tivo, cellular internet, Palm Pilot)

Solticedawn posted a bunch of interesting geeky science links, such as fun things to do with liquid nitrogen. Check the rest of the links!

If you’re feeling particularly zen about your system, or else you need to chill out, consult The Tao of Programming. 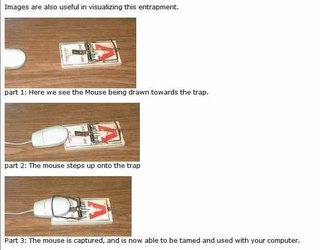 Video of an impatient kid waiting for his computer to reboot. For four minutes. Ghastly.

If Dr. Suess were a tech writer. 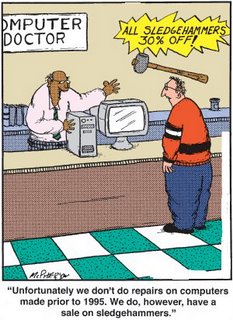 18 months ago, I upgraded to Girlfriend 1.0 from Drinking Mates 4.2, which I had used for years without any trouble. However, there are apparently conflicts between these two products and the only solution was to try and run Girlfriend 1.0 with the sound turned off.

To make matters worse, Girlfriend 1.0 is incompatible with several other applications, such as LadsNight Out 3.1, Rugby 4.5, and Playboy 6.9. Successive versions of GirlFriend proved no better.

I tried a shareware program, Slapper 2.1, but it had many bugs and left a virus in my system, forcing me to shut down completely for several weeks.

Eventually, I tried to run GirlFriend 1.2 and Girlfriend 1.0 at the same time, only to discover that when these two systems detected each other they caused severe damage to my hardware.

I eventually upgraded to Fiancée 1.0, only to discover that this product soon had to be upgraded further to Wife 1.0. While Wife 1.0 tends to use up all my available resources, it does come bundled with FreeSe*Plus and Cleanhouse2005.

Shortly after this upgrade, however, I found that Wife 1.0 could be very unstable and costly to run. Any mistakes I made were automatically stored in Wife 1.0's memory and could not be deleted. They then resurfaced months later when I had forgotten about them. Wife 1.0 also has an automatic Diary, Explorer and E-mail filter, and can, without warning, launch TurboStrop and Multi-Whinge. These latter products have no Help files, and I have to try to guess what the problem is.

Additional problems are that Wife 1.0 needs updating regularly, requiring ShoeShop Browser for new attachments and Hairstyle Express which needs to be reinstalled every other week. Also, when Wife 1.0 attaches itself to my Saab 93 Convertible hard drive, it often crashes. Wife 1.0 also comes with an irritating pop 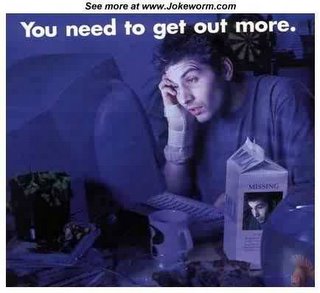 -up called MotherInLaw, which can't be turned off.

Recently I've been tempted to install Mistress 2005, but there could be problems. A friend of mine has alerted me to the fact that if Wife 1.0 detects Mistress 2005, it tends to delete all of your assets before uninstalling itself.

Three women were sitting around talking about their husbands' performance as a lover.

The first woman says "My Husband works as a marriage counselor. He alw 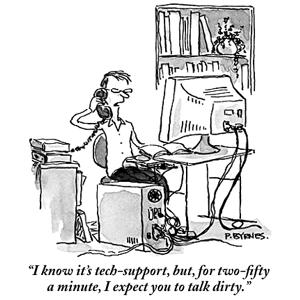 ays buys me flowers and candy before we make love. I like that."

The second woman says, "My husband is a motorcycle mechanic. He likes to play rough and slaps me around sometimes. I kinda like that."

The third woman just shakes her head and says, "My husband works for Microsoft. He just sits on the edge of the bed and tells me how great it's going to be when I get it."


Thought for today: If at first you don't succeed, call it version 1.0

I love the client stories jokes. Some people really have absolutely no clue about computers. :)

These were a lot of fun to read, thanks for the laughs.

Wait till he gets to Wife 2.0. Damn, you have to upgrade your entire network when that happens!

I just got some weird "this page has errors" message when I pulled up your page. The first time I tried it threw me out of the page with the "Microsoft needs to close" message.

good luck in getting it fixed.

I love your blog. you have a good wit and a good sense for technology. What drew me here was the mention of John Prine in your music list. i thought I was the only one thst listened to him and his illegal smile.

Old Guy, thanks for coming by, you need a picture for comments so everyone can see that you'renot old at all.

Karen, I'd use it if I can figure out how to link it!

Clueless, this is news to me. Has anyone else had a problem with this site? Heard of any?

Pirate, you are in danger of being quoted on my header. Thanks for coming on board!

Thank you for visiting my blog, and the birthday wishes. :)

Enjoyed the jokes, hey, I needed some humor.

If you get to Wife 4.0, you can't afford the deluxe model anymore. You're running a Dell...