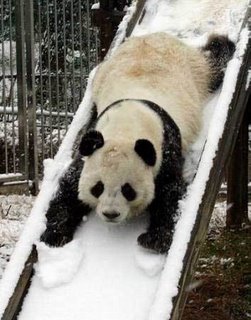 When you see a panda, you just want to say “That ain’t no real animal. Thats someone trying to make a giant teddy bar out of mismatched carpet remnants.” They have anti-camoflage. They have no natural enemies. They show no aggresive tendencies. If you’ve seen a panda exhibit at a zoo, you’d probably say that pandas seem to have no tendencies at all. They act like giant teddy bears made out of mismatched carpet remnants. But they are cute and fascinating just because they are so different. The non-violence only helps their image in the real world. Throw in a bit of violence, and you've got a joke.


Featured blog: Get your panda fix at (where else?) Pandafix.

A new breed of Panda. Yeah, its a car ad, but it fits here. This is the cleanest Panda ad I found!

Brush up on your natural science at The Panda’s Thumb. 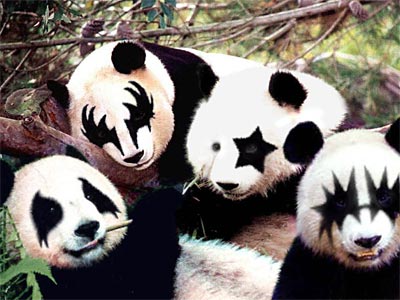 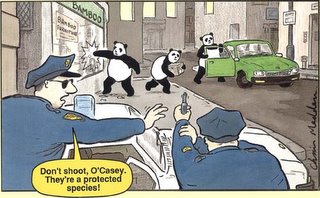 A panda walks into a café. He orders a sandwich, eats it, then draws a gun and proceeds to fire it at the other patrons.

"Why?" asks the confused, surviving waiter amidst the carnage, as the panda makes towards the exit. The panda produces a badly punctuated wildlife manual and tosses it over his shoulder.

The waiter turns to the relevant entry and, sure enough, finds an explanation. "Panda. Large black-and-white bear-like mammal, native to China. Eats, shoots and leaves."

This joke was turned into a really funny book about punctuation.


Driftglass has a devastatingly clever twist on the panda joke.

A panda walks into a bar, interrupting a heated argument between two customers. The bartender turns to the panda and says, "Hey, just the guy we needed! Tell Ollie and Neville here... are you a bear or some kind of raccoon?"

The panda ponders this for a moment and replies, "Hmmn. You know, not everything is black and white like that." 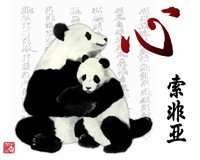 Pandacam at the National Zoo in Washington, DC.

Pandacam at the San Diego Zoo.

Pandacam at the Memphis Zoo.


Thought for today: If you can't convince them, confuse them.

Pandas are adorable. The Kiss Pandas cracked me up. I'll come back later and check out the links I didn't have time for, I need to get my behind to work.

I'm not convinced, but I am confused: are you saying Gene Simmons is a carpet remnant?

Very funny! I love the "carpet" imagery. And man,that looks so much like Dick Cheney!

Those are great pictures of "Butterstick." Thanks for looking them up.

And Cheney? What a dick.

It takes a long time to get caught up here when I miss for a while. I noticed a few [ahem] remarks about Texans. :p

Hey Girl! I love these Panda pics! I have the "Kiss" photo somewhere on my blog too. :)