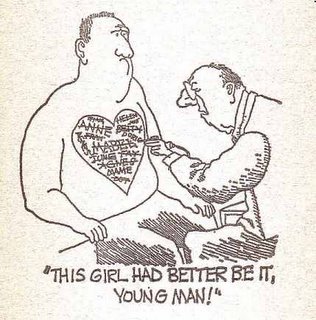 Remember when we were kids, and you wanted to make friends? The first questions were "Whats your name? How old are you?" Later on, in college, the questions were more refined to elicit meaningful information, "Where are you from? What's your major?" Now, people meet without even seeing each other, but we still try to ask the questions that give us some idea of what kind of person the other may be. One of the first is "Do you have any tattoos or piercings?" Then you draw your own conclusions from the answer. Every tattoo has a story. So do piercings. You'll either get a simple "no" (or a simple "just pierced ears"), or else you'll get a story that will reveal.. something or other.

I do not have any tattoos yet. At the radio station a couple of months ago, one of my co-workers was showing off her new tattoo. Everyone else had to compare their tattoos. I was the only one without a piece of body art. I don't regret that, but it made me feel old. I always thought life had enough pain in it, without paying for more. Here are some links and pictures of tattoos, as well as piercings and other body modifications.

See lots of tattoos at Every Tattoo.

Get a virtual tattoo and send it to someone! 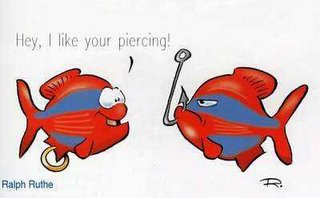 Two elderly women were in a beauty parlor getting their hair done, when in walked a young chick with a low-cut blouse that revealed a beautiful rose tattooed on one boob.

One woman leaned over to the other and said, "Poor thing. She doesn't know it, but in 50 years she'll have a long-stemmed rose in a hanging basket."


Taking body modifications to the next level. This ain’t real (note the date at the bottom), but its sure weird!

Did you ever get one of those emails with photos of corset piercings? Snopes has the story on those.

Some push the body mod envelope with tongue splitting. 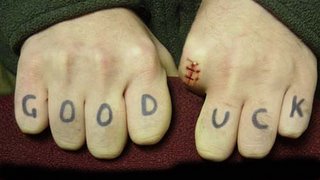 Here we see an example of a tattoo AND a body mod. However, I don't think the finger was removed on purpose. I would wager money that the missing finger has a "L" tattooed on it. Take it as a warning against trusting in luck.

The Tattooed Banana. Art made by scratching the peel of a banana, so that it turns black. I am aware this is off-topic. So sue me.

Its hard to hide your identity when you have your name tattooed on your back! 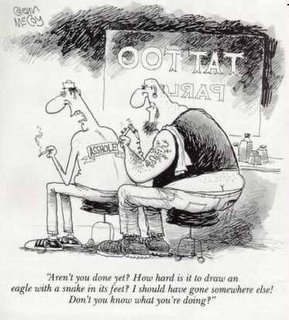 A woman is picked up by Dennis Rodman in a bar. They like each other and she goes back with him to his hotel room. He removes his shirt revealing all his tattoos and she sees that on his arm is one which reads, "Reebok". She thinks that's a bit odd and asks him about it.

Dennis says, "When I play basketball, the cameras pick up the tattoo and Reebok pays me for advertisement."

A bit later, his pants are off and she sees "Puma" tattooed on his leg. He gives the same explanation for the unusual tattoo.

Finally, the underwear comes off and she sees the word "AIDS" tattooed on his penis. She jumps back with shock. 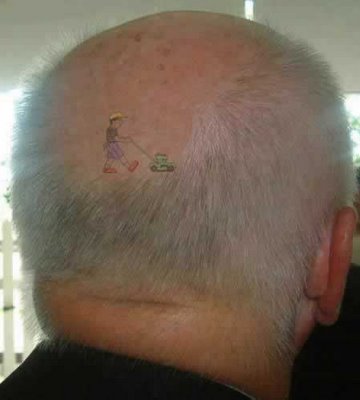 You are a Butterfly Tattoo! You are very calm and most of the time you have control over things. Sometimes you can be shy.You are a beautiful soul, with a caring heart.

What tattoo are you?
brought to you by Quizilla 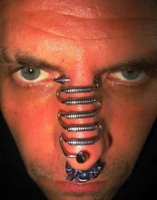 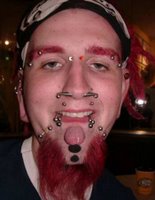 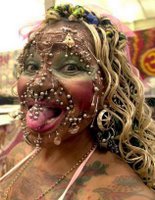 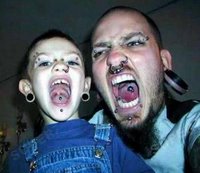 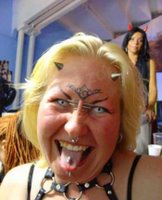 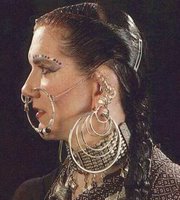 The doctor noted with astonishment a tattoo of a bluebird on the shoulder of his 70 year old patient, who was in his office for her annual check up. 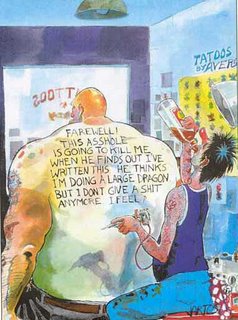 She told him that she had wanted one her whole life, so she and her 16 yr old grandson decided that they would get birthday tattoos together. As her doctor, I inquired why she had not gotten one sooner.

"Until now," she replied, "I was afraid of what my mother would say!!!"


Thought for today: Do you realize that in about 40 years, we'll have thousands of old ladies running around with tattoos?

PS Some stuff aimed at the usual suspects: More than one person has asked me recently about putting more personal content in this blog. When I started this project, the purpose was to give people something to enjoy; something to laugh at, or at least smile. At the time, my personal life was crap and I couldn't come up with anything that wasn't whiney, depressing, or angry. And I could never believe that anyone would be interested in my everyday life, opinions, or feelings anyway. I wouldn't know where to start. I've thought about starting a second blog for such things, but I don't think there's enough material to keep it going, or to keep it interesting. There is a struggle between sharing and privacy that I haven't settled yet. So what do you think? I can share a bit more of my life here IF there is any interest... and I will still include the jokes. What would you like to hear about? Give me a question and I will probably answer it. I might give you more than you asked for. Just let me know what I should write about and I will give it a try. Thanks!

I don't have any tatoos or body piercings either, and never will. It's just not my thing. My son has one earring, it looks tasteful and understated, which is the look he likes, he's not an attention seeker.

Thanks for the good wishes at the Tree House again, I really was quite feverish when I deleted a whole page of comments the other day.

And as to your bolg's content, I have 2 things to say about that.
1.) It's your blog so you can put what you want here.
2.) I like it just fine, it's funny and the world doesn't get enough laughs.

some of those look seriously painful! Ouch!

I have no tatoos or piercings and don't plan to get any. At age 62 I don't need them.

I like your blog but also would enjoy knowing more about you. I recognize the issue of privacy - this forum at least has the potential for real broad access. When I mention my family or friends I just refer to them by an initial & have noticed others who have pet names for them. And there are those who write pretty much as they would in a private paper based journal.

It is, as Oldguy says, your blog & you choose what goes into it. What you have now is successful so please don't drop or make big changes in it but I'd like it if you added more about you & your life. Just stay within your comfort zone.

Lots of people have produced personal information by doing a "100 things about me." I did that, extending it over several weeks. It was fun for all.

hey, thanks for dropping by. I choose to expose my soul for the interest of others, but the choice of doing so for you... that's your call.

Phews. I didn't see my tattoo reproduced anywhere there. Last thing I want is street cred.

As for the content, do what tickles your fancy, Miss. Mix it up a bit if you like. Or don't. You're the boss. As long as you keep that sense of fun and curiosity that I think your readers appreciate, it's all good.

Another option to posting more about you would be to post more about me. Topics like "What's in Havri's Fridge?" or "This Day in Havril" would be interesting and informative. A risque photo-essay about my little toe would be provocative. Just a thought.

Have you ever seen women with makeup tatooed on their faces? Eye liner, and that blue stuff on the eyelids?

A tattoo joke for you:
...B.B.Kings wife decides to get his initials "BB" tattooed on her butt cheeks, one B on each. This was going her gift for his upcoming birthday.
..When the day arrives, she proudly announces her gift for him by pulling down her underpants and baring her ass in front of his face.
...B.B. does a double take and asks, "Who in the hell is BOB?"

Hale, HAHA! I'm glad you posted that instead of me. (PS, us women know who BOB is)

Havril, send me a pic of your tattoo and I will make up some personal content. We don't need your little toe for that!

Thanks to all of you for your input. (smooch)

BOB? Poor guy...he gets too much work.

I have one piercing. At my age, it's the last one I'll get too. I don't want to be 70 with hanging earlobes from all the metal.

The worst thing I did today was click on one of those Gallery of Piercings pictures! Piercings are fine, like, the size of a tic-tac or something, but MAN!... not the size of a horse shoe! Anyway!