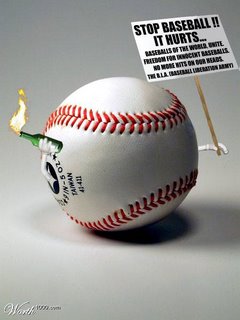 Get ready for Opening Day of the 2006 baseball season! I grew up and live in a basketball state, so my experience with baseball is somewhat limited. My father wanted me to join the Little League when I was a kid. In those days, it would have been a political statement for a girl to even try out. I wasn’t too interested, and as soon as my brother was old enough for Little League, Dad forgot all about pushing me into it. But baseball seems to be important to a lot of people, so I will play along. Because it doesn't matter whether you win or lose, its how you play the game. Yeah, right!

Scientists claim that dogs will eat anything that's put in front of them. Gee, just like baseball fans.

It's spring training. Time to see if your favorite baseball team has anybody left on it from last year.

Of the major sports, baseball has the best fighting. Then comes boxing. Watch
The Top Ten Baseball Fights.

If you’d rather read about baseball fights, there’s plenty there, too

Better just play some baseball yourself. Right there in front of your computer. Try Japanese Baseball.

Small Ball gives you your own team. You train your players and decide what positions they play. Then, when you're ready, you challenge other teams. You are the coach, manager, and owner. 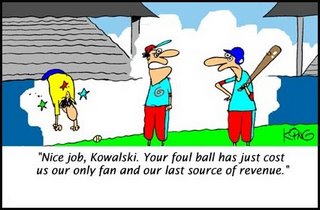 They smuggle a bottle of Jack Daniels into the ball park.

The game is real exciting and they are enjoying themselves immensely... mixing the Jack Daniel's with soft drinks.

Soon they realize that the bottle is almost gone and the game isn’t nearly over.

Based on the given information, what inning is it?

Is is easy and right there.

It's the bottom of the fifth and the bags are loaded! 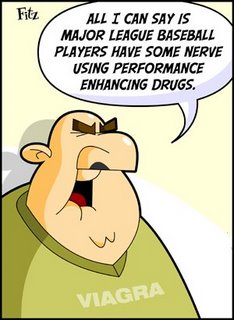 A recent Scottish immigrant to the U.S. attended his first baseball game. After a base hit, he heard the fans roaring, "Run...run!"

The next batter connected heavily with the ball and the Scotsman stood up and roared with the crowd in his thick accent, "R-r-r-un laddy! R-r-run!"

A third batter slammed a hit and again the Scotsman, obviously pleased with his knowledge of the game, screamed, "R-r-r-un boy, r-r-run will ya."

The next batter's count went to three and two. As the next pitch went outside the plate, he held his swing. The umpire called a walk and the Scotsman stood up yelling, "R-r-r-un ya bahstard, r-r-run!"

All the surrounding fans giggled quietly and he sat down, confused. A friendly fan, sensing his embarrassment, whispered, "He didn't have to run, he's got four balls."

After this explanation the Scotsman stood up in disbelief and said, "Walk with pride, lad."


The above was pretty obviously written by a testoterone-based lifeform. Can't blame me!

It's true. Baseball is as American as mom, apple pie, and handguns.

Baseball salaries are incredible. It costs more to buy a baseball team than it costs to buy an election.

More and more stadiums are bringing back natural grass. They have to. All that tobacco juice is killing the Astroturf. 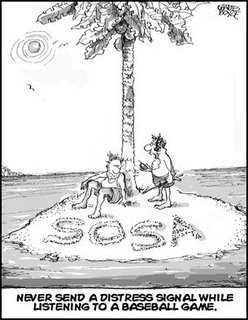 It's not that baseball is boring, but they could add a lot of excitment to the game if they'd give everybody a bat and have a goalie guarding home plate.


Thought for today: No one ever says "It's only a game!" when their team is winning.

FTS will love this post. He will be thrilled.

FTS doesn't come around here no more... if he did, I would have heard about that HAIR post! I believe he is either hibernating or else he met someone.

YAY for baseball!! Better than sex though? Those were funny but I don't totally agree that it's better than sex. I do like bats and balls though. ROFL

Uhhhh, the longest baseball game link has a major flaw in it.

The thing about MLB rules and such. I can think of at least three games since that one where innings started later than midnight. The most famous was in Atlanta in 1986, when the Mets and Braves squared off until 4:30 AM on July 4th Weekend, capped by, believe it or not, a fireworks display in the wee hours of the morning.

Actually, I haven't read anyone's blog during my move. I hope to get back on schedule soon. I was told I needed to get over here today for the baseball, though.