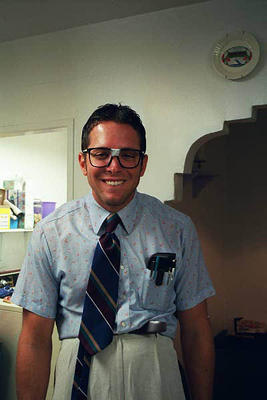 I love nerds. I could sit and listen to a nerd talk for hours, even the parts I don't understand. Maybe its just part of my obsession with observing human behavior (which is why I love this blog). More than once I've been called a nerd myself, but I'm too people-connected (touchy-feely) to qualify under most definitions.

In 1988, I joined a computer club based in Oak Ridge, Tennessee. The nerdiest guys on the planet. Think nuclear physicists who want to learn how to draw cartoons on their computers. I was there for hours before they realized there was a WOMAN in their club.

In college, I dated this nerd who was working on a PhD in molecular genetics. His idea of a good time was sneaking me into the biolab at Mizzou to show me his electron microscope. He was NOT being euphemistic. Fun, but I just couldn't get past the bad breath. Sometimes I wonder how different my life would be now if I'd just given him some altoids.

Do you think you might be a nerd? Try this test to find out. Then another.

Some say nerdiness might be a sign of Aspergerger's Syndrome. You might also want to take the Asperger's test. Passed all of those? Then find out whether you are really cool.

If you have ascertained that you are a nerd, you may be interested in the Nerd Liberation Movement. The author could use a spell checker, however.

Nerd TV: An internet show where each episode features an interview with an interesting geek. You can watch all of it or just the good parts.


Nerd Season
This truck driver hauling a tractor-trailer load of computers stops for a beer. As he approaches the bar, he sees a big sign on the door saying:

"Nerds Not Allowed -- Enter At Your Own Risk!"

He goes in and sits down. The bartender comes over to him.
"You smell kind of nerdy. What do you do for a living?"

"I drive a truck, and the smell is just from the computers I'm hauling."

"Okay, truck drivers are not nerds," he says and serves him a beer. As he is sipping his beer, a skinny guy walks in with tape around his glasses, a pocket protector with twelve kinds of pens and pencils, and a belt at least a foot too long. The bartender, without saying a word, pulls out a shotgun and blows the guy away. The truck driver is totally shocked.

"Not to worry, the nerds are overpopulating Silicon Valley and are in season now. You don't even need a license."

The truck driver finishes his beer, gets back in his truck, and heads back onto the freeway. Suddenly, he veers to avoid an accident, and the load shifts. The back door breaks open and computers spill out all over the freeway. He jumps out and sees a crowd already forming, grabbing up the computers.They are all engineers, accountants, and programmers wearing the nerdiest clothes he has ever seen!

He can't let them steal his whole load. So, remembering what happened in the bar, he pulls out his gun and starts blasting away, felling several of them instantly. A highway patrol officer comes zooming up and jumps out of the car screaming at him to stop.

"What's wrong? I thought nerds were in season," says the truck driver.
"Well, sure," says the patrolman. "But you can't bait 'em!"

Its a common idea that nerds don't get very far with the ladies. Or with men, if you're talking about a girl nerd. Or even with the same gender. From my research, I've found that's altogether a myth. Women love nerds, they just find them hard to reach. This blog entry talks about a study showing nerds do just fine, thank you. They will even brag about it, if given half a chance. Here are the reasons nerds are such good lovers.

I also found a dating service for nerds... and its FREE! If you find a match, whether on this site or not, you may want to consult this dating guide for nerds. And if it comes down to it, there's even nerd advice about how to be good in bed.

If all else fails, watch this SNL skit about phone sex for nerds.


Thought for Today: I just wanted to say that I'm a nerd, and I'm here tonight to stand up for the rights of other nerds. I mean uh, all our lives we've been laughed at and made to feel inferior. And tonight, those bastards, they trashed our house. Why? Cause we're smart? Cause we look different? Well, we're not. I'm a nerd, and uh, I'm pretty proud of it. (from "Revenge of the Nerds")

Great site. Boy, you must do a lot of work to put this together. Looks very professional.

Hey I married a nerd. And let me tell ya. Well maybe I won't. I am what they call a wild child so they say. I am just outgoing. Me and my NERD have been married 26 years and I can't get enough of his smarts. He is and IT Manager.
I'm a part time clown. He doesn't mind being called a NERD. Actually we call him Chiphead. All his e-mail addresses starts with Chiphead. He is proud to be called a nerd.

SO, Bozette, is the list of "reasons nerds are worth it" correct? I would reckon so!

Let me say this I wouldn't will up my NERD for anything. A Nerd will make sure there partner is takin care of before them. If you know what I mean. And to anwser your Question yes it is CORRECT.

Oh dear, it took me a minute but I could read that. Nerds can be cool. I took a nerd test a while ago and I think I was less than half a nerd. Mostly because I'm addicted to blogs, email, and shiny new gadgets.

This was a fun post, as always. Have a great weekend :-D

Another great post! BTW, I finally put you in my links. Sorry it took so long.

Anyway, my son is a nerd, and proud of it. We come from a long line of nerds, who have contributed more to society than any athlete.

Where did you get that picture of me?

Growing up my Mom worked for Caltech, home 'o the nerds. I love them, and anyone else passionate to distraction about what they do! Carry on!

you can't bait them. you may be the funnist blogger I have come across thus far.

Well Miss Cellania, if you were a nerd you'd be one of the cutest nerds I know of :-)

No I am not going to comment because this is an old post -- older than dirt. Older than Methuselah. (So, what is a geek?)

Try this link for Geeks Hoss!