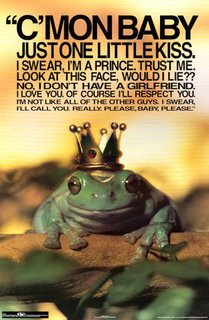 We cherish the classic tales of childhood, where horrible witches eat little children, parents are killed left and right, and the only way a lowly-born woman can find happiness is to kiss frog after lyin' frog til one turns into a prince. You may not live happily ever after with a prince, but you probably won't starve. And pity the poor prince who is forced into marrying the only princess who woke up complaining about a pea under the mattress. I had always wondered about that marriage. And I'll never understand why she just didn't go sleep elsewhere.

A little farther down, I'll go off on Cinderella. But first, lets have a story. These stories are just a little bit different. you may want to read over them before sharing with the kids.

Once upon a time, in a land far away, a beautiful, independent, self assured princess happened upon a frog as she sat, contemplating ecological issues on the shores of an unpolluted pond in a verdant meadow near her castle.

The frog hopped into the princess' lap and said: "Elegant lady, I was once a handsome prince, until an evil witch cast a spell upon me. One kiss from you, however, and I will turn back into the dapper, young prince that I am, and then, my sweet, we can marry and set up housekeeping in yon castle with my mother, where you can prepare my meals, clean my clothes, bear my children and forever feel grateful and happy doing so." 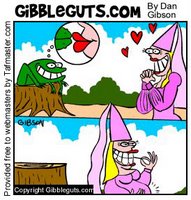 Later that night, as the princess dined sumptuously on a repast of lightly sauteed froglegs seasoned in a white wine and onion cream sauce, she chuckled to herself and thought...

A man was crossing a road one day when a frog called out to him and said, "If you kiss me, I'll turn into a beautiful princess." He bent over, picked up the frog, and put it in his pocket.

The frog spoke up again and said, "If you kiss me and turn me back into a beautiful princess, I will tell everyone how smart and brave you are and how you are my hero" The man took the frog out of his pocket, smiled at it, and returned it to his pocket.

The frog spoke up again and said, "If you kiss me and turn me back into a beautiful princess, I will be your loving companion for an entire week." The man took the frog out of his pocket, smiled at it, and returned it to his pocket.

The frog then cried out, "If you kiss me and turn me back into a princess, I'll stay with you for a year and do ANYTHING you want." Again the man took the frog out, smiled at it, and put it back into his pocket.

Finally, the frog asked, "What is the matter? I've told you I'm a beautiful princess, that I'll stay with you for a year and do anything you want. Why won't you kiss me?"

The man said, "Look, I'm a computer programmer. I don't have time for a girlfriend, but a talking frog is cool." 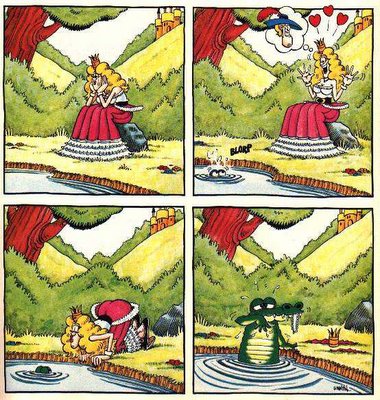 Once upon a time, a guy asked a girl "Will you marry me?" The girl
said, "NO!" And the guy lived happily ever after and went fishing, hunting
and played golf a lot and drank beer and farted whenever he wanted. (Thanks, Linda!)

Hoss had another fine but fractured fairy tale on his site recently.

Kenju recently retold the tale of Lancelot and the Witch, a great story you need to check out.

What Classic Fairy Tale Are You?
brought to you by Quizilla

Besides the atrocious spelling in that quiz, I’m not sure I much like being Cinderella. She is just a victim of circumstances, whose only real action in the story is to make wishes. Besides, the shoe thing is kinda creepy. Even more creepy when I found out the origins of the story. There are many versions of the Cinderella story, but the oldest is from China, the land of the original foot fetish. In the Chinese Cinderella story, Yeh Shen, the king never even meets her, but becomes obsessed with finding the girl who has such small feet to fit in the lost shoe. Now honestly, doesn't that soun 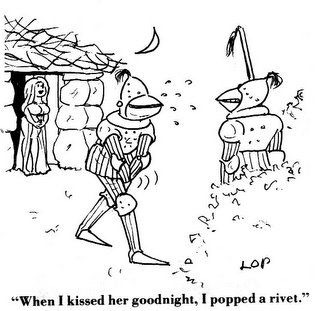 d kinky to you? 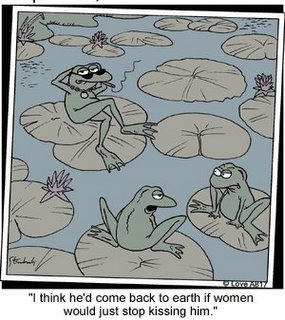 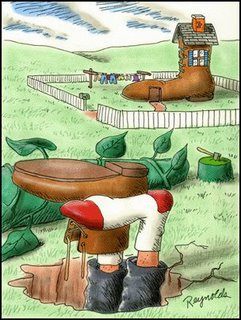 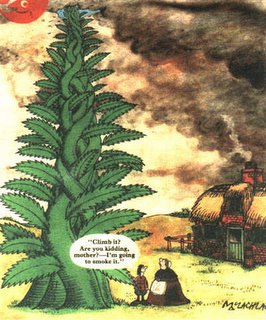 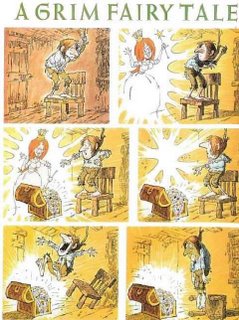 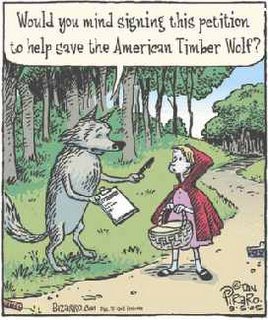 OK, since you’ve made it this far down, here’s a link to the adult versions of some classic fairy tales. 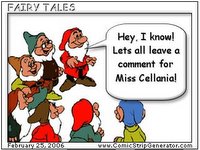 Those cartoons were a kick, especially the knight one. ROFL Thanks for the laughs today!

You continue to amaze me. Every day is different but still interesting. I was a bit surprised there was nothing related to the Wizard of Oz stories. Please continue writing these fascinating posts!

I used to be called "Cringe Farming", because you'd kiss me and I turned into a frog.

Or at least I think they said frog. Something about being a son of a beach...

Hiya. Where'd you find the Mad Magazine cartoons? Scanned? I recognized the right away - especially the Don Martin one with the crocodile.
Great post. (On coffee break and vacuum is put away.)

It is amazing how truly scary fairy tales can be. But children love them. And I loved your versions of "Kiss the Frog". :-)