You can look at what I drive and tell I’m not car-proud. At least not right now. I drive a green minivan with a banged-up fender. It screams Mamamobile. A far cry from my ‘66 MG Midget, my ‘72 Karmann Ghia, or my ‘88 Toyota Supra. See, I always believed that if you’re going to get an old car, you may as well get an awesome old car. Once the kids are old enough to drive themselves, the minivan is history. I’ll be cruisin in my midlife crisis car (it would be my third crisis by then), maybe a Jaguar. More likley, a Miata. Who am I kidding? In my dreams!

What would Jesus drive?

Video of an experiment to see what a jet airliner will do to an automobile.

Have you ever seen a “Pinto Pelt”? (Thanks, Kirby!)

Take a virtual drive through San Francisco or Seattle.

Longest car in the world.

A cunning stunt. Don’t try this at home!

Mercedes drivers who are mean to old ladies shall receive their comeuppance.

You're stylish, nimble, and good-looking. When it comes to having fun, there are few who can surpass you. And yet, you suffer from a lingering inferiority complex. Maybe it's because you have an older relative who is always in thelimelight?

Take the Which Sports Car Are You? quiz.

Subject: Guy who knows his math 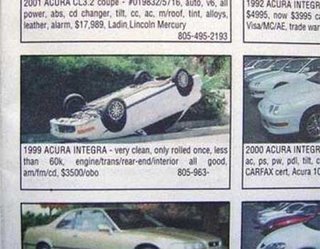 I was riding to work yesterday when I observed a female driver, who cut right in front of a pickup truck, causing the driver to drive onto the shoulder to avoid hitting her.

This evidently angered the driver enough that he hung his arm out is window and gave the woman the finger.

"Man, that guy is stupid," I thought to myself. I ALWAYS smile nicely and wave in a sheepish manner whenever a female does anything to me in traffic, and here's why:

I drive 48 miles each way every day to work.

Of these, 16 miles each way is bumper-to-bumper.

Most of the bumper-to-bumper is on an 8 lane highway.

Even though the rest of the 32 miles is not bumper-to-bumper, I figure I 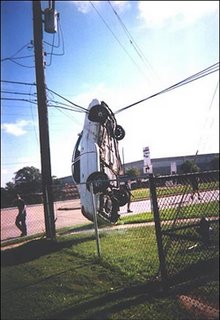 That brings the number to something like 36,000 cars that I pass every day.

Statistically, females drive half of these.

According to Cosmopolitan, 70% describe their love life as dissatisfying or unrewarding.

According to the National Institute of Health, 22% of all females have seriously considered suicide or homicide.

And 34% describe men as their biggest problem. 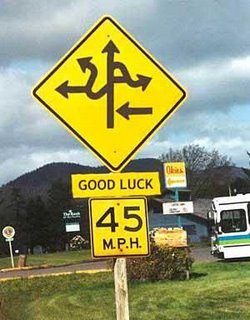 According to the National Rifle Association, 5% of all females carry weapons and this number is increasing.

That means that EVERY SINGLE DAY, I drive past at least one female who has a lousy love life, thinks men are her biggest problem, has seriously considered suicide or homicide, has PMS, and is armed.

Give her the finger? I don't think so.

I was in a car dealership a while ago when a large new motor home was towed into the garage. The front of the vehicle was in dire need of repair and the whole thing generally looked like an extra in "Twister." I asked the manager what had happened. He told me that the driver had set the cruise control, then went in back to make a sandwich. 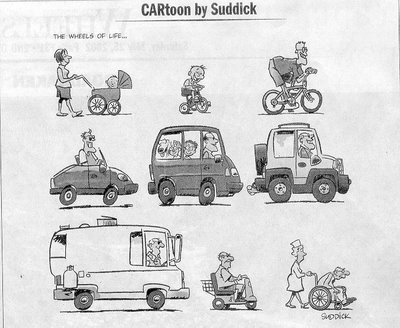 Thought for today: There are two kinds of pedestrians: the quick and the dead.

I took your "What kind of a car are you" test and actually came out as a Mazda Miata which is interesting as I just bought my third Miata! I guess it shows this was a good choice of a play car for me. I see you are a Boxter. I am sure they are nice but go try a Miata. You can buy two or more of them for the same money & I'll bet you will have spent a lot less on maintenance over a ten year time on the Miata.

Dick, I am not even familiar with a Porsche Boxter. Doesn't look all that pretty to me!

Coll, I am the same way, function over form. At least in real life... I can still dream of a little sports car, can't I?