A Link and a Prayer 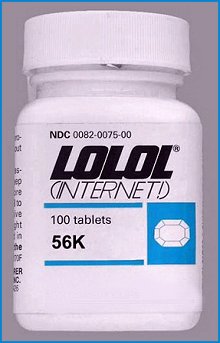 I had the usual paragraph here complaining about how I cannot load blogspot.com sites. But LO AND BEHOLD last night, all of the sudden, they ALL LOAD CORRECTLY! Hallelujah! After 3 months, I can see my OWN blog, plus those of my buds, and even my archives! I don't know how long this will last. I need to make sure I'm holding my mouth right.

I went ahead and obtained a domain. This site can now be seen at http://misscellania.com Really, there is supposed to be some advantage to that, but I haven't seen it yet.

Have you ever had the feeling that Someone is trying to tell you something? This week, no less than FOUR people, none of them connected to each other, have suggested I might sell my house and move. No, it wasn’t because of some complaint I made, well maybe once, but there were different reasons and different conversations. One was a person who wants to sell me her house, but that won’t be happening, since I know the guy who inspected her basement. One is my kid, who just wants a newer, prettier house. But still, this confluence of events makes me think “hmmm, sell the house. Hmm. Naw, no one would buy it.”

Read the full description before looking at the picture.

The picture below has 2 identical dolphins in it. It was used in a case study on stress level at St. Mary's Hospital. Look at both dolphins jumping out of the water. The dolphins are identical.

A closely monitored, scientific study of a group revealed that in spite of the fact that the dolphins are identical, a person under stress would find differences in the two dolphins. If there are many differences found between both dolphins, it means that the person is experiencing a great amount of stress.

Look at the photograph and if you find more than one or two differences you may want to take a vacation. Click here.

Things you never realized about left-handed people in a right-handed world.

What if Microsoft designed the packaging for the ipod? (lifted from Omegamom)

Check out the Goldbrick Gallery for new editorial cartoons everyday!

The Honeywagon is a song from two brothers in Georgia who each own a septic-cleaning business.

Revenge of the video game character.

The Walk. A simple cartoon that will make you smile for a minute.

You think American Idol is fun? You can see Google Idol anytime you want... maybe even enter!

VISION TEST
Can you find the dogs in this picture?

Have you ever wondered about the straw that broke the camel’s back? See that and more! OK, no camel, but the rest of it is pretty amazing!

British ad for... I’m not really sure what, but you gotta see this! 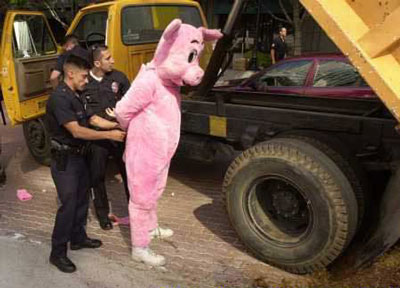 Whats your take on this?

THE DISHWASHER (Lifted from Matt)

Wanda’s dishwasher quit working so she called a repairman.

Since she had to go to work the next day, she told the repairman, “I’ll leave the key under the mat. Fix the dishwasher, leave the bill on the counter, and I’ll mail you a check.”

“Oh, by the way don’t worry about my bulldog. He won’t bother you. But, whatever you do, do NOT, under ANY circumstances, talk to my parrot!” “I REPEAT, DO NOT TALK TO MY PARROT!!!”

When the repairman arrived at Wanda’s apartment the following day, he discovered the biggest, meanest looking bulldog he has ever seen. But, just as she had said, the dog just lay there on the carpet watching the repairman go about his work.

The parrot, however, drove him nuts the whole time with his incessant yelling, cursing and name calling. Finally the repairman couldn’t contain himself any longer and yelled, “Shut up, you stupid, ugly bird!”

To which the parrot replied, “Get him, Spike!”

Does he really love me?

The Firing Squad Brain Teaser. I figured this one out. Several years ago.

Naked World Records has to do with world records that people broke while naked. Not really a lot of nudity here, but you will see The Governator in the altogether if you look for him.

Desktop Blues. This is about as much fun as you can have playing The Blues.

THE ESCAPE (Thanks, Eva!)

A woman was having a daytime affair while her husband was at work. One rainy day she was in bed with her boyfriend when, to her horror, she heard her husband's car pull into the driveway. "Oh my God - hurry! Grab your clothes and jump out the window. My husband's home early!"

"I can't jump out the window! It's raining out there!"

"If my husband catches us in here, he'll kill us both!" she replied. "He's got a hot temper and a gun, so the rain is the least of your problems!"

So the boyfriend scoots out of bed, grabs his clothes, and jumps out the window. As he ran down the street in the pouring rain, he quickly discovered he had run right into the middle of the town's annual marathon, so he started running along beside the others, about 300
of them.

Being naked, with his clothes tucked under his arm, he tried to blend in as best he could. After a little while a small group of runners who had been watching him with some curiosity, jogged closer.

"Do you always run in the nude?" one asked.

"Oh yes!" he replied, gasping in air. "It feels so wonderfully free!"

Another runner moved a long side. "Do you always run carrying your clothes with you under your arm?" 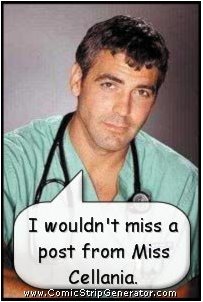 “Oh, yes" our friend answered breathlessly. "That way I can get dressed right at the end of the run and get in my car to go home!"

Then a third runner cast his eyes a little lower and queried, "Do you always wear a condom when you run?"

"Nope, just when it's raining."


Thought for today: Tell me what you need and I'll tell you how to get along without it.

I hope it continues.

It really is a total mystery why that should have happened.

Yay for you.. your own domain. I always think it is like owning a small piece of cyberspace.

I swear, I don't see any dogs in that photo! LOL

Congrats on your new domain and new home :-D

I DO need a vacation, that's for sure.

The museum sign is a kick. You find the best stuff!

Have a wonderful weekend!

Congratulations on getting the blog set up at your own domain!

I have been cruising your site for about an hour - so many funny thing - so little time! LOL

Thank you for sharing - everyone needs a good laugh and you have supplied an abundance!

I will change you link on my blogroll!

Ummm umm. Love me some George :)

Ms C. ~ I am amazed with the stuff you come up with and especially with its humor! ~ jb///

There were two dalmations in that picture (shrugs).

Arbroath, thanks! You have no idea how hard it is to work around not having access to your own site. Its such a relief!

Call and Karen, what dogs?

Marti, the blogspot link will still work, no worries.

Poopie, ain't it the truth? We know how to grow 'em in Kentucky! Johnny Depp is a native, too. Tom Cruise went to high school here, but we dont much claim him.

JB, you are a sweetie!

Big Dave, I looked and looked, and I couldn't see any dogs. Maybe I need to look again.

It is good to hear that you can finally look at blogs on Blogger but I sure wonder what happened. It seems like just a matter of time before they go away again without you knowing what caused it. Aren't computers fun?

Son (11) dragged me back here to find the link to the short movie 'More'. He is so touched by it that he wants to show everybody - but Arrrgh, wheres it gone? I lost it!
Please help?
Thanks

Hey Fellow, you have a top-notch blog here!
If you have a moment, please have a look at my videogame info site.
Good luck!