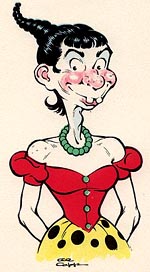 It all started when Hekzebiah Hawkins, a prominent resident of Dogpatch, realized that he might just end up supporting his darling daughter Sadie all her life, since she was just too ugly to land a husband. That just wouldn’t do. Therefore, he came up with a foot race in which the first bachelor Sadie caught and drug back to the starting point would have to marry her. The rest of the unmarried women of Dogpatch thought that was a great idea, so they turned the race into an annual event where gals pursued the town's bachelors, with matrimony the consequence. It became known as Sadie Hawkins Day, in honor of the ugliest woman in Dogpatch.


This story was first mentioned in the November 13, 1937 edition of the comic strip Li’l Abner by Al Capp. Sadie Hawkins Day became an integral part of the strip, which ran until 1977. College campuses picked up on the idea, with the first Sadie Hawkins Day dance being held at Morris Harvey College in 1938. The idea spread like wildfire! Life magazine reported that over 200 colleges held Sadie Hawkins Day events only two years after the first strip about it ran. The concept was very popular for about thirty years. The real-life versions of Sadie Hawkins Day involved girls asking boys for a date to the dance, a technique which was fairly rare at the time. It was also an excuse for people to poke fun at hillbillies, with participants dressing up in Dogpatch style. 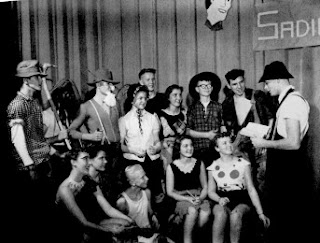 Sometimes a “king and queen” of the dance would be crowned, under the names Li’l Abner and Daisy Mae. But you know what? Hillbillies are the best at making fun of themselves.

Although some contend that Sadie Hawkins Day is February 29th,  a date that only occurs once every four years, that just wouldn’t work for those who yearn for an annual chance  event. In 1952, Al Capp wrote: "It's become my responsibility [to include Sadie Hawkins Day every year in the strip.] It doesn't happen on any set day in November; it happens on the day I say it happens. I get tens of thousands of letters from colleges, communities, and church groups, starting around July, asking me what day, so they can make plans."

As with any holiday, there are plenty of products to go with it. Send a Sadie Hawkins Day ecard! There are several available.

Buy a Sadie Hawkins Day button! The Lil Abner strips are available in book form. This one has the 1937 origins of Sadie Hawkins day.


MSN has advice on how a woman can ask a man for a date.


Mike wrote a funny and off-color Sadie Hawkins Day story at It Occurred to Me.


150 Clues that You Married a Redneck.


She said, OK, I’m not a redneck, but I want a redneck themed wedding. Newsflash, girl, this means you ARE a redneck.

Once there was a hillbilly boy who, after getting his G.E.D. (high school equivalency diploma), went to work for his father in the family business of Rust-Collecting.

One day he met a hillbilly girl and they hit it off and started dating. They enjoyed each other's company, and both liked the same things, like Cow-Tipping and Beater-Car-Smashing. Eventually, they decided to marry.


After the ceremony, the boy was really looking forward to the wedding night, and to show how big a deal this marriage was, he took his new bride to an actual,money-paying Motel. When they arrived, his wife went into the bathroom to change, while he was getting ready himself. She came out of the bathroom dressed in her sexiest burlap, and the boy grabbed her and tossed her on the bed. "Be gentle with me," she said,"I'm a virgin."


The boy immediately flew into a rage, got dressed, grabbed the girl and threw her into the back of his pickup truck. He screeched to a stop in front of her parents' house, threw her out, and burned rubber outta there. He drove to his Dad's house and told him the whole story through eyes filled with tears. His Dad comforted him and said,"You did the right thing, son---don't feel bad. A VIRGIN??!! Well, if she wasn't good enough for HER family, she sure isn't good enough for OURS!!!"

A week after their wedding, the redneck newlyweds, Ed and Arlene, paid a visit to their doctor.

"You ain't gonna believe this, Doc," said the husband. "My thingy's turnin' blue."


"That's pretty unusual," said the doctor. "Let me examine you."

The doctor takes a look. Sure enough, the redneck's "thingy" really  was blue.


The doctor turns to the wife, "Are you using the diaphragm that I prescribed for you?"


"Yep, shore am," she replied brightly.

"And what kind of jelly are you using with it?"

Thought for today: Being a woman is a terribly difficult trade since it consists principally of dealing with men. -Joseph Conrad