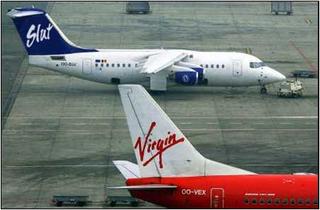 Eastern Airlines recently introduced a special half fare for wives who accompanied their husbands on business trips. Expecting valuable testimonials, the PR department sent out letters to all the wives of businessmen who had used the special rates, asking how they enjoyed their trip.

Letters are still pouring in asking, "What trip?"

If Operating Systems Ran The Airlines

UNIX Airways
Everyone brings one piece of the plane along when they come to the airport. They all go out on the runway and put the plane together piece by piece, arguing non-stop about what kind of plane they are supposed to be building.

Air DOS
Everybody pushes the airplane until it glides, then they jump on and let the plane coast until it hits the ground again. Then they push again, jump on again, and so on ...

Mac Airlines
All the stewards, captains, baggage handlers, and ticket agents look and act exactly the same. Every time you ask questions about details, you are gently but firmly told that you don't need to know, don't want to know, and everything will be done for you without your ever having to know, so just shut up.

Windows Air
The terminal is pretty and colorful, with friendly stewards, easy baggage check and boarding, and a smooth take-off. After about 10 minutes in the air, the plane explodes with no warning whatsoever.

Windows NT Air
Just like Windows Air, but costs more, uses much bigger planes, and takes out all the other aircraft within a 40-mile radius when it explodes.

Linux Air
Disgruntled employees of all the other OS airlines decide to start their own airline. They build the planes, ticket counters, and pave the runways themselves. They charge a small fee to cover the cost of printing the ticket, but you can also download and print the ticket yourself. When you board the plane, you are given a seat, four bolts, a wrench and a copy of the Seat-HOWTO.html. Once settled, the fully adjustable seat is very comfortable, the plane leaves and arrives on time without a single problem, the in-flight meal is wonderful. You try to tell customers of the other airlines about the great trip, but all they can say is, "You had to do WHAT with the seat?" 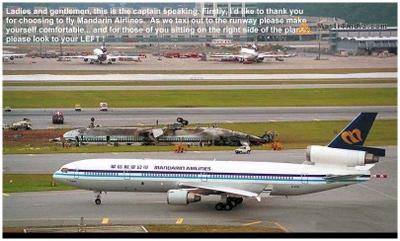 On a British Airways flight from Johannesburg, a middle-aged, well-off white South African lady has found herself sitting next to a black man. She called the cabin crew attendant over to complain about her seating.
"What seems to be the problem, Madam?" asked the attendant.
"Can't you see?" she said, "You've sat me next to a kafir. I can't possibly sit next to this disgusting human. Find me another seat!"
"Please calm down, Madam." the stewardess replied. "The flight is very full today, but I'll tell you what I'll do. I'll go and check to see if we have any seats available in club or first class".
The woman cocks a snooty look at the outraged black man beside her (not to mention many of the surrounding passengers). A few minutes later the stewardess returns with the good news, which she delivers to the lady, who cannot help but look at the people around her with a smug and self-satisfied grin.
"Madam, unfortunately, as I suspected, economy is full. I've spoken to the cabin services director, and club is also full. However, we do have one seat in fir 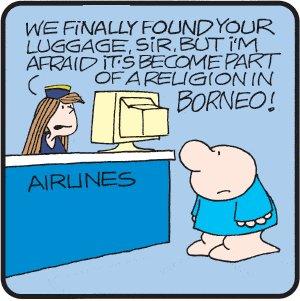 st class".
Before the lady has a chance to answer, the stewardess continues: "It is most extraordinary to make this kind of upgrade, however, and I have had to get special permission from the captain. But, given the circumstances, the captain felt that it was outrageous that someone should be forced to sit next such an obnoxious person."
With that, she turned to the black man and said: "So if you'd like to get your things, sir, I have your seat ready for you..."
At which point, the surrounding passengers stood and gave a standing ovation while the man walked to the front of the plane. 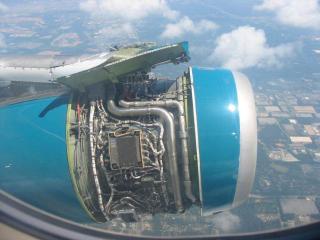 I usually request a window seat, but this time I'd prefer the aisle.

Wanna see some footage of my last air trip? Then you'll know why its my last! This entry wouldn't be complete without a report on Naked Air. This site contains nudity (duh).
More airlines jokes.


This entry was inspired by my friend chinamom.
(who no longer has a blog at that address)

Thought for today: If flying is so safe, why do they call the airport the "terminal"?

I've flown that much I now hate it, especially trips where the engine cover flies off!

There was a story on Countdown the other night about where all the lost luggage goes (a place in Alabama it seems.) But one interesting note: among all the luggage lost by the airlines, there were a lot of men's wedding rings. Interesting.

you know I used to be able to sleep on flights, then I got older, and now it's just uncomforatble...

... and I am never, ever, ever, going back to Australia, Aviation Suicide!

When you get up in the air, Junior Birdman, be sure to drop in on me. I wanna see your little round tummy. Heh.

TC, hi, thanks for visiting! I love your site, I'm bookmarking it.

Ed, I am NOT surprised.

El, I took what was (at the time) the longest regularly scheduled flight on earth, the 16 hour Chicago-Hong Kong leg in COACH. Australia couldn't be worse. Now they have an 18-hour leg from NY to Hong Kong!

Hoss, you're hitting a sore spot there. I don't wanna have to resort to smoking.

"Letters are still pouring in asking, "What trip?" "

I see I have been qouted...must think of more now :)

Very funny! I just booked flights to Atlanta and then one to San Francisco ... and all before hearing about Naked Air! I wonder if they feature Naked News during the flights?

I enjoy your site!