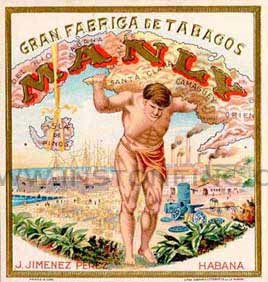 What can I say about manliness? In a perfect world, its something to be admired and desired, the same as femininity. I certainly admire a manly man, but what makes a man MANLY is a matter of opinion, and it can’t really be nailed down. Its like art, or obscenity.... I can’t define it, but I know it when I see it!

Manliness, maleness, macho, masculinity, all words that supposedly mean the same thing, yet each brings up a different picture, due to the popular usage of the words. The tone you use to say it can also convey different meanings. "He's quite manly..." As opposed to what? A woman? A man who is not manly? A man who tries too hard to be manly? Or a man who doesn't feel the need to try? Or are you by chance referring to someone suffering from Testosterone Poisoning? Or are you being sarcastic? The Free Online Dictionary defines masculinity as:


Doesn't seem all that helpful. I get the feeling you could end up chasing links in circles here.

The Male code of ethics (in order to not seem gay) part one and part two. (Thanks, Theresa!)

100 reasons its better to be a bloke.

25 things that make you feel manly.

Is this manly or not? I dunno, you tell me. But I know the ladies will love watching the Skating Cowboys. Don’t miss the punchline at the end!

Its more manly to waste time than to ask for help.

Hmm, looks like the beer belly no longer spells manliness. (lifted from Arbroath) 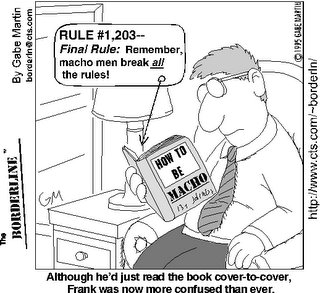 A typical macho man married typical good-looking woman and, after the wedding, laid down the following rules: "I'll be home when I want, if I want and at what time I want -- and I don't expect any hassle from you. I expect dinner to be on the table unless I tell you otherwise. I'll go hunting, fishing, boozing, and card-playing when I want with my old buddies and don't you give me a hard time about it. Those are my rules. Any comments?"

His new bride said, "No, that's fine with me. Just understand that there'll be sex here at 7 o'clock every night -- whether you're here or not."

We pause here for a word from our manly sponsor, Crack Spackle.

Those who have been driving for many years are familiar with macho driving techniques. Newer drivers however, are probably curious as to what these people are up to. Here's some tips for macho driving:

* Drive a pickup truck whether you need one or not. It must be very large with lots of blinding yellow fog lights. If it doesn't have them already, purchase used tires from MX missile transport trucks (roughly 6' in diameter); raise the suspension to allow cle

arance over the whimps that drive cars.

* Practice your best scowl. Remember, that this is the only expression you are permitted to show once you're behind the wheel.

* Do not be intimidated by the weather. It should never affect your driving style. Under no circumstances should you use windshield wipers. They're for appearance only. If snow blankets your vehicle, clear a peep-hole just large enough to see what's in front of you. You are not permitted to leave your vehicle to do this however! If you can't reach around to the windshield while you are driving, then put on your defroster full blast until you can just see the road.

* Darkness intimidates whimps! Only use your headlights when its pitch dark, so that you can see the police. Of course, if you have those blinding yellow fog lights, you may use them whenever you see fit.

* Be prepared to yell obscenities at &/or give the finger to anything that crosses your path.

* The road sign "YIELD" or a flashing yellow light have no meaning. Actually, the STOP Sign is the indication to yield, but only if absolutely necessary. You must never come to a complete stop unless the vehicle in front of you does.

* Driving on the shoulder during traffic jams is strongly encouraged.

* Passing on winding, narrow roads without hesitation will gain the respect of other macho drivers.

* Never yield to emergency vehicles, such as ambulances. They will find a way to get around you. Hell, they should never have caught up with you in the first place. 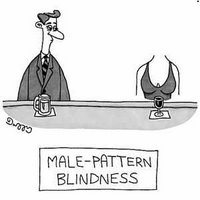 * You must master the art of tailgating to become a full-fledged macho driver. With practice, it is possible to maintain a distance of two feet or less between you and the vehicle in front of you without even paying attention! This is particularly irritating to the driver who is in front of you in heavy traffic. Remember, you are always in a bigger hurry than the guy in front of you.

* Another art to master is that of "cutting off" other drivers. This must be done with great care when cutting off other macho drivers. Your mission is to see the front of the vehicle you're cutting off nearly hit the ground as it brakes to a screeching halt.

* Sometimes associated with "cutting off" is the ability to close off gaps in traffic. When you detect a vehicle either trying to pull into traffic or accelerating from behind in an attempt to get past you, you must adjust your speed such that the gap in traffic will not be there when that vehicle gets to it. You must anticipate the driver's intention while, nonchalantly altering your speed to intercept.

Note: A fun variation of this technique is to use it to prevent vehicles from getting on or off the highway at ramps.

Its not easy being a guy, as shown in the cartoon Life as a Guy. 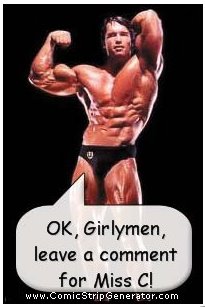 For more on Manliness, get the book.

Thought for today: Milk is for babies. When you grow up you have to drink beer. -Arnold Schwarzenegger

I too am not sure how to define Manly.. it is one of those things that is easily recognized but not easily defined. For me Macho and Manly are definitely not synonyms. Had so much fun reading your post :-).

heh...I define manly as the same as childish :p The only difference between a man and a boy is the price of the toys.

Thanks for stopping by at both my blogs, Stop It and Awfulsouls :D I'm afraid that I slipped today and had a quick smoke that made me feel like poop physically.

Came in via BlogMad... I liked this post. Attempting to define ones masculinity, or femininity for that matter, by what some one else believes is the 'ideal' sort of defeats the purpose, don't you think?

It's not the cars, trucks, clothes, jewlery, toys or other 'bling' you can buy... money isn't what makes a male, a man, anymore than it makes a female a woman.

To me what defines a person, their masculinity, or femininity, is their deeds. Those things they do, when no one is watching. Those tough choices, when you do what's right, especially when it's not easy, or popular... that's what defines us, in the end.

Coll, thats what I think, too, its all too subjective for words.

Christa, I would never have known both those were yours! One slip does not a failure make, you'll get back on track, I KNOW you will!

Bill, thanks for joining us... you are the first GUY to comment, although I normally have several guys with SOMETHING to say! I agree with your view. But my habit is to make funnies out of anything.

Okay, that cartoon on the poor guy with women is very funny, but a little sad, no?