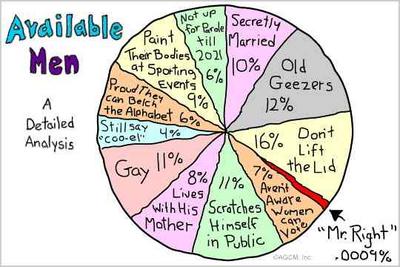 Not that I'm that picky. My late husband fit into several of those categories. His other qualities more than made up for it!


Attention Killer Ladybugs- What NOT to name your baby. Sometimes its too late, and we get to choose which name is worst.


Cartoon of Bomby, the Bomb-Exploding Robot. (Thanks Carol Anne!)

Perfect name for a porta-potty company.

Todays quiz: Which Bob Dylan song are you? (Thanks Del!)

Are you right brained or left brained? Who knows the difference? Which is better? Who cares as long as I get my coffee? (Thanks Carol Anne, Dawn/Beth, and Sarah!)

Look for old school pictures of you or your friends at this site.

Here's another mindless game to keep you at the computer.

Have you ever wondered what your furniture does when no one is home? Not work- or child-safe.

Thanks for the feedback and submissions! The smartest man I know wrote and asked me what Cellania means. Several people want me to send them tomatoes. Still taking suggestions. Give me a topic, and I'll throw it into the pot and let it stew.


Lorrie is trying to tell me there ain't no Santa Claus. I saw him yesterday at an intersection. He was a big guy, about fiftysomething, with long white hair and beard, driving a sporty red convertable. I smiled at him. He winked at me! Hee hee, Santa is going through a mid-life crisis!


"Irony lives in China, a photo blog" (Thanks Ann!) Check out the picture of the sign for Zapata's restaurant!


Todays quiz: What Dilbert character are you?

Worth1000.com has constant contests for Photoshop enthusiasts. Right now they are featuring one for melding two movies into one poster. Take a look! See The Lion King and I, A Few Good Men in Black, Dirty Harry Potter, and My Big Fat Greeking Wedding Crashers. You'll need to scroll down a bit, they have a lot of ads.


If you are going to pick your nose, do it here.


Thought for today: It's hard to make a come back when you haven't been
anywhere.

For about three weeks every August, I am buried in tomatoes. Here's what I do with them: I pick, sort, wash, boil, peel, chop, drain, reboil, can, label, and store them. The next day its the same thing. Occasionally, I even eat them. At the end of this period, when I have time to look up, I wonder where the kids are. Oh! School started already?

Don’t get me wrong, I LOVE tomatoes, particularly the organic backyard sun-ripened kind. Otherwise, I wouldn’t plant the seeds every January. But by the time I’m wiping tomato juice off the walls in late August, they begin to haunt my dreams.We have stewed tomatoes, tomato juice, tomato soup, baked tomatoes, tomato salad, fried green tomatoes, tomato wraps, gazpacho, spaghetti sauce, ketchup, and salsa. This is at the tail end of a summer spent putting up jams, jellies, beans, and peppers, too. I do not make tomato soap.

Every year I learn something, usually from a failure. This year the lesson came from success. Six cherry tomato plants are too much. Two or three will produce plenty of salad for a family. Anyone who puts out two dozen cherry tomato plants should be shot. That would be me. I gave away as many as possible, but they kept multiplying. I finally took down the blender and made juice, but it was a ton of trouble washing that many ping pong ball sized tomatoes. The large tomatoes have now waned, but the cherry size will continue to bear until frost, or whenever I tear them up by the roots. 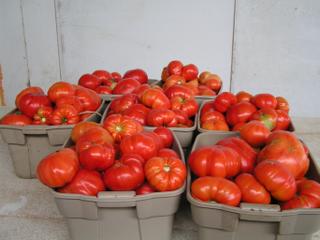 Tomatoes are big all over. Except for the little ones. In Valencia, Spain, they set aside a few days just to throw tomatoes at each other. Tomato festivals are big in the US, but here they tend to be like county fairs, with parades, funnel cakes, and Porta-Potties. I found dozens, but I'll just link to a few, from Yuba City, CA, somewhere in New Jersey, and Pittston, PA.

Tomatoes have been honored in movies, too. Remember Fried Green Tomatoes at the Whistle Stop Cafe? 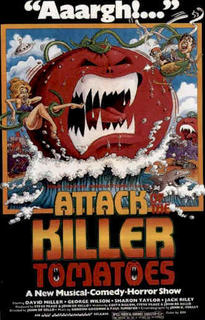 And the classic Attack of the Killer Tomatoes (yes, the song is here)


I even found a religion based on tomatoes, and they even have a yahoogroup, although its not real busy. 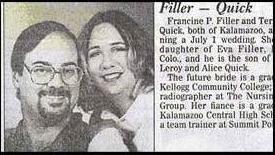 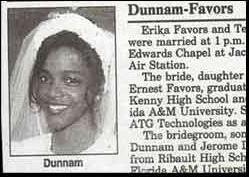 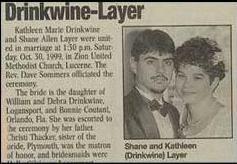 "Not only has my ass been itchin', on closer
inspection 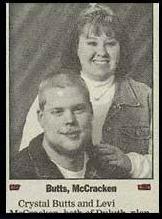 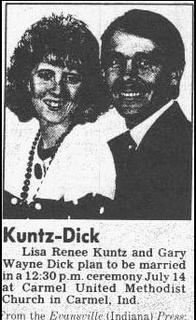 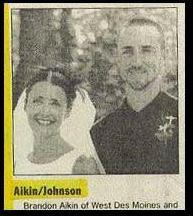 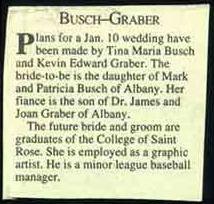 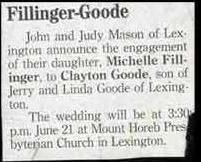 "After I get all of these medical problems taken care of,
I think I'll go get a . . . 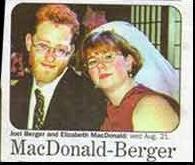 Marriage changes passion...suddenly you're in bed with a relative.

I love reading other folk’s blogs, so I’ve been toying with the idea of having my own. I’m a single working mother, so what I REALLY need is another hobby to take up all that spare time. I’m neither a gifted nor a prolific writer (though some may argue with the prolific part), and the everyday events of my life are nothing to write home about. Well, maybe the home folks care, but not the general public. And I KNOW no one cares about my opinions, though I have some. There is no broad field of interest I am an expert in. And I sometimes end a sentence with a preposition. So I will try to keep the personal rambling short, and devote this blog to fun stuff that you may enjoy. Contributions are welcome, so if you come across anything interesting, email me. Let me know if I can use your name.

To start things off, here is one of my favorite music videos. Also Here is a really strange and difficult game. I've just started trying to figure it out. So far, I've crashed it, burned it, and punctured it. A real time-waster.

Thought for Today- The only difference between a rut and a grave is the depth.