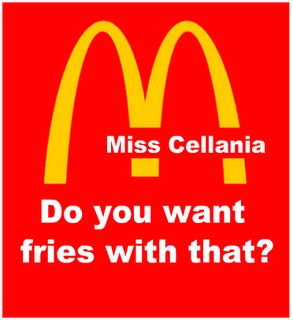 It happened again tonight. They shorted me at McDonalds.

You know, it wouldn’t bother me so much if it were just me. Or if it only happened once in a blue moon. But it happens about 25% of my visits. And there is always one hungry or dissapointed kid. Yes, I usually sit at the window and check every item, but I don’t do it EVERY time, which I should. As soon as you pull out into traffic, you hear “Mom, there’s no hamburger for Sissy!” from the backseat. Thats when I turn around and see two dozen people waiting in the drive-through line, and at least as many waiting inside. And it doesn’t matter which McDonald’s location it is. All three in this town have shorted me, plus others up and down the highway.

Tonight, my younger daughter wanted ONLY french fries. So they shorted us the fries. I wasn’t out in traffic yet, so I pulled into a parking space and grabbed my receipt. I want inside, waited in a slow line while they cooked food for the folks in front of me, and then explained my problem. While I was talking, they bagged up several portions of fries and handed them out the window. Then she scraped up what was left from the bottom of the fry bin and handed it to me. It was about half full. “This is all I have,” she said “I can make some more, but it will take a few minutes.” 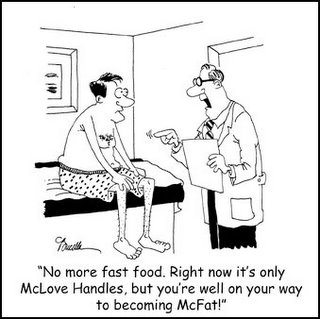 No thanks, its late, the other food is getting cold, and I know when I’ve been screwed. Its not like this hasn’t happened before. I wonder why they never manage to give me too much food every once in a while. No, its always a shortage. Why do my kids love this eatery so much?

The Freaky Universe of McDonalds Commercials.

McDonalds chicks (warning, may be offensive).

McSpotlight is the anti-McDonalds site. Links take you to many other places. 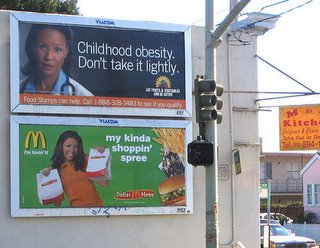 THE OLD FOLKS
An elderly couple walked hand in hand slowly into McDonalds one cold winter evening. They looked out of place amid the young families and young couples eating there that night. Some of the customers looked admiringly at them.

You could tell what the admirers were thinking. "Look, there is a couple who has been through a lot together, probably for 70 years or more!" The little old man walked right up to the cash register, placed his order with no hesitation and then paid for their meal.

The couple took a table near the back wall and started taking food off of the tray. There was one hamburger, one order of French fries and one drink. The little old man unwrapped the plain hamburger and carefully cut it in half. He placed one half in front of his wife. Then he carefully counted out the French fries, divided them in two piles and neatly placed one pile in front of his wife. He took a sip of the drink, his wife took a sip and then set the cup down between them.

As the man began to eat his few bites of hamburger the crowd began to get restless. Again you could tell what they were thinking. "That poor old couple. All they can afford is one meal for the two of them."

As the man began to eat his French fries one young man stood and came over to the old couples' table. He politely offered to buy another meal for the old couple to eat. The old man replied that they were just fine. They were used to sharing everything.

Then people noticed that the little old lady hadn't eaten a bite. She just sat there watching her husband eat and occasionally taking turns sipping the drink. 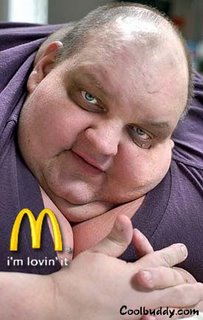 Again the young man came over and begged them to let him buy them something to eat. This time the lady explained that no, they were used to sharing everything together. As the little old man finished eating, his wife helped to wipe his face neatly with a napkin.

The onlooking young man could stand it no longer. Again he came over to their table and offered to buy some food.

After being politely refused again he finally asked a question of the little old lady. "Ma'am, why aren't you eating? You said that you share everything. What is it that you are waiting for?" She answered... 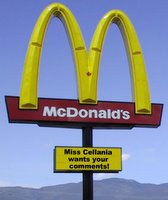 Have you seen the movie, "Super Size Me?" It's very interesting.

That adult menu is a kill! LOL

"I wonder why they never manage to give me too much food every once in a while."

You HAVE to read this post from my blog written last November. True story!

Marx said that religion is the opiate of the masses.

I don't think he had McDonald's fries.

FUNNY FUNNY STUFF here! But really... I do still like their food. It is consistant from place to place. Not GOOD mind you, just consistant! ~ jb///

Carl, I left the SAME COMMENT at Figlet's blog three days ago! Great minds think alike... or did you read that already?

Karen, I've been meaning to see that for a long time, in fact that movie is why I finally bought a DVD player, but time slipped away...

John, I was lucky enough to be able to load the post you linked. YOU got all my McDonalds luck!!

JB, good to see you up and about!

Our McDonald's out here offers a "Gourmet" menu. Is that not an oxymoron, McDonald's and gourmet?
Besides, if I'm going to McDonald's to eat I'm going for the greasy, salty, heart-stopping, fast foods, the stuff that clogged arteries are made of.

What do you suppose the victoria's Secret Sauce is?

I have often wondered why McDs has become such a part of our culture. All across the USA children from broken homes are doing the kid swap thing at McDs. I know i did when my oldest daughter would come to stay with me. We always met at a McDs. I have seen it in movies and have had friends tell me the same.

The other thing is when they catch these creeps that prey on kids over the internet the authorities always lure the creep to a McDs where the bust is made.

the answer i am the one that is the shortet of the brothers. The one to tghe far right behind my grandmother

I am glad to come across your blog. It cracks me up when i read your profile. Almost the exact same movies, books and music. I don't meet many that area as strang as me.

the stuff is heinous, if we can no longer smoke in restaurants or bars, if 18 year olds can die in Iraq, but not drink Shlitz, and dammit if some hippy cant light up a spliff becasue he needs to take the edge of playing guitar, then why the hell is McDonalds legal? The crap probbaly kills more people a year than, oh I dont know, black tar heroin?

El! Are you back in the States? Good to see you here... while you were gone, the average age of my commenters has gone into the stratosphere.

Pirate, I could tell you what the Secret is, but then I'd have to kill you. And i didn't list ANY books in my profile, did I?

Doug, hiya! Gourmet McDonalds does seem like not only a contradiction, but a waste of effort too.

Hilarious post. I especially enjoyed the drive thru sign prank. The pics of the Mc Chicks definately inspired me to eat more carefully!

you didn't list books but i was trying to see if you were paying attenetion.

LOL! Those were great jokes!

I hear you about getting short-changed on food, it happens to us too. I piss off the cars behind us, because I will stay at the pickup window so I can double check every item before leaving. And my son WORKS at McDonald's!

Have you heard my story about the $2000 French Fry? It was an E-Bay auction we had, after the boy wrecked my car because of it. I'll have to dig out the link - hang on (Marti scurrying to a second window)OK, here it is:
http://digitaldoorway.net/2000-dollar-french-fry

Go ahead and laugh. After a while, I did LOL