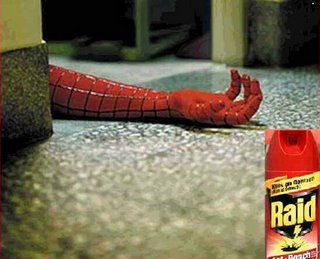 I must’ve been about 6 years old when my mother made my brother and me each a Super Hero cape. We had already spent a lot of time trying to fly off the back porch. We watched Superman every afternoon, and Batman at night twice a week. It wasn’t long after that I started buying DC comic books, for 15 cents each. I ended up with boxes and boxes of them. They would be collector’s items now, but we threw them out. That’s OK, they were pretty well worn out after I read them over and over.

Superheros bring out the kid in all of us. A kid doesn’t mind acknowledging a longing for super powers, and the chance to advance truth, justice, and the American Way. Things aren’t so simple, so black-and-white in the adult world, but its nice to pretend they are every once in a while.

A cartoon featuring every super hero you could drag from your imagination: The Ultimate Showdown of Ultimate Destiny.

The science of Superman. 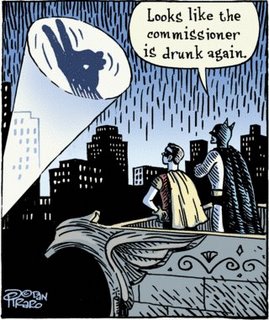 Captain Jackson and the Crimefighter Corps of Jackson, Michigan.

The religious affiliations of comic book Super Heroes. (Thanks, Prydwen!)

The best Batman joke ever. Thats not neccessarily my opinion, that’s what it is labeled.

The Official Burt Ward Website. For you young folks, he played Robin on TV.

Are you a Super Hero? Try the Trainee Superhero game! 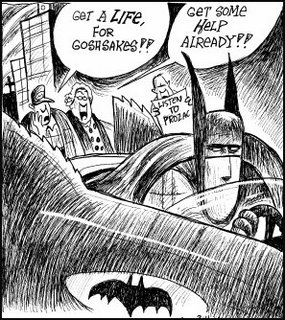 Batman and Robin are camping in the desert, set up their tent and are asleep. Some hours later, Batman wakes his faithful friend. "Robin, look up at the sky and tell me what you see."

"What does that tell you?" asks Batman.

Robin ponders for a minute.

"Astronomically speaking, it tells me that there are millions of galaxies and potentially billions of planets.

Astrologically, it tells me that Saturn is in Leo.

Chronologically, it appears to be approximately a quarter past three.

Theologically, it's evident the Lord is all-powerful and we are small and insignificant.

Meteorologically, it seems we will have a beautiful day tomorrow.

What does it tell you, Batman?"

Batman is silent for a moment, then speaks:

" Robin, you idiot, someone has stolen our tent." 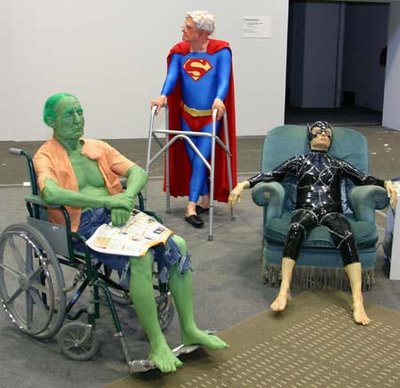 So you’ve decided to become evil. A guide.

How to destroy the earth. 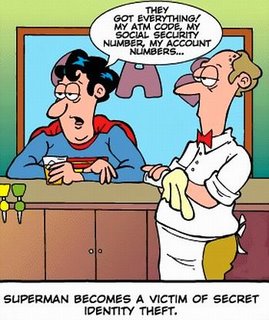 At his request, each morning 3-year-old Ray's mother pinned a bath towel to the back shoulders of his size two T-shirt. Immediately in his young imaginative mind, the towel became a magic blue and red cape. And he became Superman.

Outfitted each day in his "cape," Ray's days were packed with adventure and daring escapades. He was Superman.

This fact was clearly pointed out last fall when his mother enrolled him in kindergarten class. During the course of the interview, the teacher asked Ray his name.

"Superman," he answered politely and without hesitation.

The teacher smiled, cast an appreciative glance at his mother, and asked again, "Your real name, please."

Realizing the situation demanded more authority, or maybe to hide amusement, the teacher closed her eyes for a moment, then in a stern voice said, "I will have to have your real name for my records."

Sensing he'd have to play straight with the teacher, Ray slid his eyes around the room, hunched closer to her, and answered in a voice hushed with conspiracy, "Clark Kent."


Which Super Hero are you?

Your results:
You are SupergirlClick here to take the "Which Superhero are you?" quiz...

Three drunks are standing on top of the Empire State Building.
The first one says to the other two, "You know, it's a funny thing about these wind currents. A person could jump off of this building right now and not even hit the ground; the wind would carry him right back up to the top of the building!"

The second drunk says, "You're crazy!" 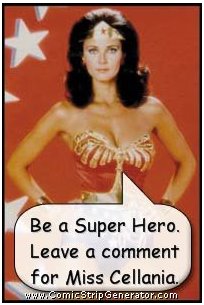 The second drunk says, "Let me try!"
So the second drunk leaps off of the building and promptly falls to the street below, landing with a hideous SPLAT!

The first drunk smiles, clearly amused. The third drunk looks at him and says, "You know, Superman, you can be a real Jerk When you're drunk!"

Blog of the day: Super Underwear Pervert Hero. Too bad its a blogspot site, I can't load it!

Thought for today: In this world, there is right and there is wrong, and that distinction is not difficult to make. -Superman

Thanks for stopping by Greywulf::Net :)

I'm a superhero fanatic, anyway, so this is an awesome post!!! I am so bookmarking you!! thanks for visiting me.

Love Supermonk and the Household Cleaner quiz (how true!)

Interesting about the religious affiliations. Who woulda thought?

I always said that about Superman and sex! (From why Superman never married)

I love the evil links. My fave is the first. Thanks again for another great blog entry!

I came out as sort of a weak Superman -- like, maybe a patsy for Lois Lane and Starbuck's.

I loved all the super hero comics as a youngster.. especially Superman himself.

Sweetie, this is so clever! Brilliant..love Spiderman!

Thanks, this was fun!