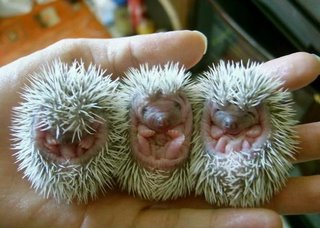 I started writing about porcupines because of the overly cute photo to the left of baby porcupines. I soon found out that porcupines are much more of a joke subject in England than in the US. Apparently on the other side of the pond, porcupines are famous roadkill, somewhat in the way we regard possums. Over there, they are called hedgehogs. We Yanks really don't care who hogs our hedges, and our nouns are more often descriptive. A Pork-You-Pine is sorta like a pig with pine needles, see? Always go with the overly simplistic.

Anyway, the jokes I found were all British, a little hard for Americans to understand. I consulted Wulfweard the White (who knows everything) about hedgehogs. So please read the following with a British accent: 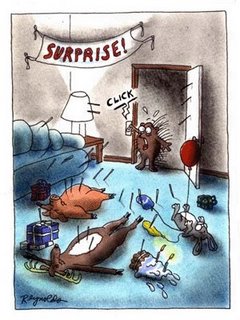 I wrote a poem for my kids about a hedgehog.

The people of Britain love Hedgehogs in the garden as they keep down slugs and snails. They have a habit of attacking rubbish bags (garbage) and make strange honking noises when mating (normally on my front lawn outside my bedroom).

On occasions we have albino hedgehogs.

What Animal Were You In a Past Life?
Everything you ever needed to know about porcupines can be found at Hoglets.com.

What is a Porcupine Tree?

Everyone deserves a hug, even a porcupine.

What a porcupine can do to a dog. Pictures may be disturbing. I also found the story of a less serious attack.

Dancing Poprcupine. This is a video, NOT a cartoon.

Q. Why did the hedgehog cross the road?
A. To see his flat-mate.

Q. Why did the hedgehog cross the road?
A. To show he had guts.

Q. Why couldn't the hedgehog wash his hair?
A. Because he'd left his head and shoulders on the road.

Henry Hedgehog was six months old – it was time for his first road safety lesson.

At midnight Mr and Mrs Hedgehog took him to the nearby A77 Glasgow to Kilmarnock road.

‘Right,’ said Mr Hedgehog, ‘walk across the road as swiftly as you can. But keep an eye out for headlights.’

‘What do I do if I see headlights?’ asked young Henry.

‘You must sit perfectly still in the middle of the lane,’ instructed Mr Hedgehog. ‘That way the wheels go on either side of you.’

Mr Hedgehog demonstrated this several times then told Henry it was his turn.

Nervously Henry scurried across the road. As he reached the far lane bright lines came rushing towards him. Henry did exactly as he was told and froze in the middle of the lane.

There came a screeching of brakes and a dreadful squelching noise. 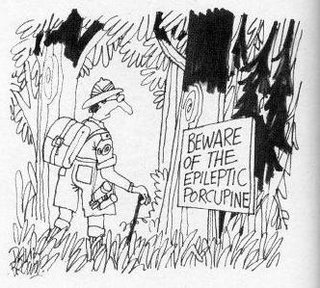 ‘Darn!’ said Mr Hedgehog, ‘When was the last time you saw a Reliant Robin on this road?’

(Yank alert: I believe this is a three-wheel vehicle)


Thought for today:
How can a person
Love a porcupine?
If you would know love,
Put away your quills.

-Ed Bremson, The Tao of Love 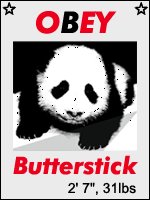 P.S. In other wildlife news, the little American panda, Tai Shan, also known as Butterstick, has something big planned for this Friday. Apparently, I am part of Butterstick’s posse for sending people to this site. Go there and look, just in case I win a t-shirt or something for staying on the list.

I got the baby porcupine pic in my email yesterday, it's so cute!! :-) I loved the cartoons too.

My friend in England has a hedgehog house in her garden to house them for the winter. Cute little fellas.

If you really want to know, better go back and look. (I utterly FAILED to give you credit the first time through. Thanks for the reminder, princess.)

I had a pet hedgehog but she never tamed enough to be anything but really, really ouchy. You'd put her down on the carpet, and she'd growl and attack the carpet, tearing at it viciously. NOT a good pet when you have a toddler... so, Miss Tigglywinkle was given away.

this is a cool post. those baby hedgehogs are sooooo cute.

a porcupine is my spirit animal or totem animal...

I love little hedgehogs! I'd have one but a.) the cat would probably try to eat it or, b.) the dog would think it was a toy, especially when it rolled up in that little ball!

Apparantly I was a praying mantis in a previous life ... guess it's better than a cockroach. :)

That hedgehog card has its counterpart in the States, only it's a skunk...

awwwwwwww aren't they precious!!! Great post as always! You made me giggle and I sorely needed that!

OMG.. the first photo is just adorable. I had no idea that hedgehogs and porcupines were the same critters.

hehehe, i actually have a few porcupine tree cds and saw them last may in ny... sigh... with my ex...

Coll, I got a message from Nevin that they are NOT the same creature, that hedgehogs do not release their quills. They must be closely related, though!

No hedgehogs don't release their quills, their only defence is to curl up into a ball and hope you can't find a way in.

Apparently the travellers say they taste ok, if wrapped in mud and baked (the mud helps the quills come off)

I heard that once upon a time, for a very brief period, Walkers crisps market tested hedgehog flavour crisps (potato chips) in Wales, when there were a lot of Romanies and new-agers over there.

Why were they there? Some, allegedly, because the rolling hills and very damp soil are an excellent breeding ground for magic mushrooms and hallucinogenic toadstools.....

"Hedgehog's Dilema" is Episode 4 of Neon Genesis Evangelion!! The greatest anime ever!!!

I'm a spirit porcupine too!

I was puzzled when I saw the hedgehogs labeled as porcupines. So I did an internet search and found the following, which I hope brings clarity to the situation:


Hedgehogs and Porcupines are not even related.

One of the major differences concerns the quills. A porcupine's quills are extremely sharp and barbed - and very dangerous. They detach easily when they have been embedded into the victim's skin. They are not venomous, but can certainly cause infection.

A hedgehog's quills (compared to a porcupine's) are very dull and are NOT barbed - not dangerous at all.

The defense mechanisms of hedgehogs and porcupines vary tremendously. Hedgehogs roll up into a ball, hiss, pop, and jump for protection. Porcupines arch their back, which has the effect of making the quills stand straight up. They have strong, armored tails which they thrash about to hit a potential predator. Once their barbs embed in the skin of their attacker, they expand, forcing the quill deeper into the attacker's flesh.