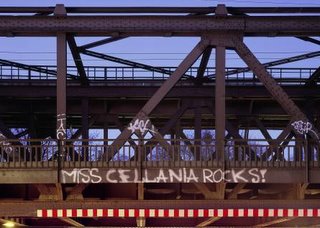 A couple of days ago, I posted an entry entitled “Sex and the Single Blogger”. When you’ve got SEX in the title, and SEX in the tags, you don’t need any other PR. It was my highest traffic day EVER for overseas visitors. Especially Middle Eastern states, like UAE and Saudi Arabia. Go figure... Smart Filter is keeping them from sites with any nudity, so they should know when they get in here they won’t see anything. And thanks to the usual suspects for throwing a love fest in the comments. I did NOT expect that, but it certainly made me feel good!

Biscuit the kitten is still settling in. He provides constant entertainment by falling off the furniture, falling into the bathtub, and stalking every toy and moving foot in the house. He walked across my keyboard one day and enabled a widget that talks. It announced the title of every page I visited, and every button I pushed. Not only is that a total pain when you’re trying to listen to a video, but there are quite a few page titles I really don’t want announced to the children. I ended up calling one of the Geek Squad heroes to get that taken care of. I am such a bum. Biscuit still tries to catch the cursor.

Its been over a month since I've had a smoke. I still want one, but I don't think about actually going out to buy a pack. My brain is about to catch up with the idea that I'm not going back this time. Hey, if you are new here, you're invited to visit the Frappr map in the sidebar, and plant your face (or just name) on the appropriate spot. If you are old, you can come, too!

If you’re going to be in New Mexico on April Fool’s Day, check out the Trinity site at the White Sands Missile Range. (Thanks, Amy!)

Clever video rendition of the Ogden Nash poem Frog Round.

Page Cannot Be Displayed page with a way to vent your frustrations.

Synchronized goldfish. Something tells me somebody’s into realistic animation here.

IS YOUR MOUSE CALIBRATED?

To re-calibrate your mouse, click and hold on the S. Then drag the S toward the e. If it doesn't work, you might want to clean your mouse.

Stop farting around and
go do something constructive.


Find the cheapest gas prices in your town. (Thanks, Wendy!)

A reporter is caught up in the War on Drugs. You may get a contact high just from watching. (Thanks, Linda!) 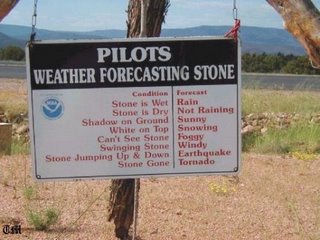 If you don’t look good, you may find your photo on Innapropriately Dressed.

The folks at Neatorama are mourning the passing of Petunia. They have posted a nice little tribute.

Telecommuters working in the nude! (no pictures)

Why do some people think my opinion means anything? Ben asked me to tell him what I thought about his site, Simian Exist. I told him I thought it was a blogspot site, which will not load for me. Maybe YOU can give him some feedback!

Here are FOUR political spectrum quizzes in one place! Plot yourself, and be ready to defend your beliefs. (Thanks, Ed!) 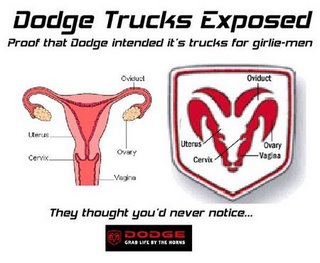 I don't understand. After the last child was born, she told me we had to cut back on expenses, I had to give up drinking beer. I was not a big drinker maybe a 12 pack on weekends. Anyway, I gave it up but I noticed the other day she came home from grocery shopping and when I looked at the receipt and saw $45 in makeup.

I said, "Wait a minute, I've given up beer and you haven't given up anything!"

She said, "I buy that makeup for you, so I can look pretty for you."

I don't think she'll be back. 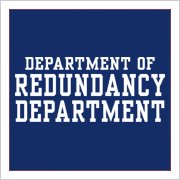 Frisk ad. If you’re into nipples. (lifted from Plumbutt)

Cheney’s Got a Gun.

9. The intersection of Count and Basie in Richmond, Va. 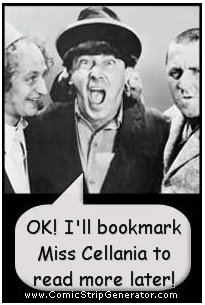 5. The intersection of Clinton and Fidelity in Houston

4. The intersection of Lonesome and Hardup in Albany, Ga.

3. Farfrompoopen Road in Tennessee (the only road up to Constipation Ridge)

Photos of Biscuit added by request. 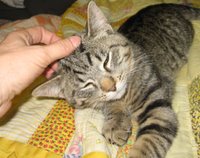 My God you're a busy blogger. Every post is chock full of nuggets you've found or created. Thanks!

Hope you're feeling well and enjoying your journey along the path (sounds a little high-fallutin' - what I mean is "hope yer havin fun and life is good sister!"

Nerds - I love 'em. I mourned the loss of Tech TV, as I couldn't see Chris Pirillo and Leo LaPorte every day (most readers scratch their heads, those who know laugh heartily) LOL

Great blog hon. Sorry for not stopping by very often, I am horribly busy these days - hope you understand. I sincerely appreciate it it when you come by and comment - thank you!

And I saw the personal ad just now. EEEEEEEK!!!!

Spiders on drugs?! I was brave to click on the link since I don't like spiders but was relieved when they were only webs LOL Who thinks of these things?!

Your kitty sounds adorable! Do you have a pic?

Have a great weekend :-D

The next time you have the Geek Squad in ask them to find out why you can't go to blogspot sites & get that fixed. There are a lot of good sites over there.

Move to Washington State if you need more incentive to quit smoking. They are close to $6 for a pack of twenty with all the state tax. Of course we hope that too many don't quit as those taxes help fund medical insurance for those who can't afford it. How do you like that relationship? Part of the cause is helping to pay to fix the problems!

My mouse is fixed now & I will go try to do something productive. I am going to tour the Biosphere II today up in Oracle, AZ. Keep up the good work on your blog.

Marti and Saur, thanks!

Karen, I'll post a picture of Biscuit here in a minute.

Dick, the Geek Squad has been working on that since Jnauary 3rd. We've tried a ton of ideas, no solutions yet.

Stopped by via Sandy, just surfing. Motherkitty live in the western part of the state.

Thanks for stopping by and commenting! Wow! Your blog has tons of stuff :) Too much for me to process with my 3 year old running around and talking my ear off! I'll be back later to soak it all it . . . it looks way cool!

What a sweetheart!!! Thanks for adding the pics of Biscuit. My cat is a tabby but she's got more white. Makes me want another one, but my cat wouldn't stand for it. LOL

You're funny :) Thanks for the laughs.

Muahaha, I love the Dodge dohinky!!!

Move to Washington State if you need more incentive to quit smoking. They are close to $6 for a pack of twenty with all the state tax.

Yeah, although the cheapos are still not all that pricey. Most of the people I know who smoke actually find it cheaper to drive two hours to Idaho and buy them.

Apropos of your street names, in this town there's an intersection of Dunn and Brad streets.

I recalibrated my mouse. Now what do I do?

Tomas and Al, glad to have you here!

Spicehut, you are in danger of being quoted in the header. Curry is on the stove!

Tnchick, the Dodge doohickey is the most popular thing going today. I got that from Wulfweard.

Joel, thats why KY cigs are so cheap, people drive in from all over to buy them here.

Hoss, the last thing you need is ME to tell YOU what to do!

Oh my goodness.. Biscuit is just too adorable. :-)

A big congrats on not smoking for a month. I know how difficult the first month is.. it only gets better and easier. It has been 4 years for me now and the feeling of freedom is still wonderful.

Teach a man to fish... and he'll sit in a boat drinking beer all day.