Starting today, I am going do some rerun posts from back when nobody visited this site. No one reads the archives anyway, and I just feel lazy. So there. This is going to happen every Friday until I get a date. So it could be a LOOONG time. 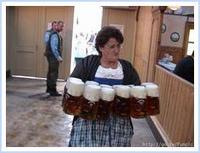 DOS Beer:
Requires you to use your own can opener, and requires you to read the directions carefully before opening the can. Originally only came in an 8-oz can, but now comes in a 16-oz can. However, the can is divided into 8 compartments of 2-oz each, which have to be accessed separately. Soon to be discontinued, although a lot of people are going to keep drinking it after it's no longer available.

MAC Beer:
At first, came only in a 16-oz can, but now comes in a 32-oz can. Considered by many to be a "light" beer. All the cans look identical. When you take one from the fridge, it opens itself. The ingredients list is not on the can. If you call to ask about the ingredients, you are told that "you don't need to know." A notice on the side reminds you to drag your empties to the wastebin.

Windows 95 Beer:
The world's most popular beer. Comes in a 16-oz can that looks a lot like Mac Beer's. Requires that you already own a DOS Beer. Claims that it allows you to drink several DOS Beers simultaneously, but in reality you can only drink a few of them, very slowly, especially slowly if you are drinking the Windows Beer at the same time. Sometimes, for no apparent reason, a can of Windows Beer will explode when you open it.

Windows 98 Beer:
See Windows 95 beer above. About the same but Windows 98 beer creates less gas and makes you crash less.

Windows 2000 Beer:
A new beer on the market. A lot of people have taste tested it and claim it's wonderful. The can looks like Mac and OS/2 Beer's can, but tastes like Windows 95/98 Beer. It comes in 32-oz cans, but when you look inside, the cans only have 16-oz of beer in them. Most people will probably keep drinking Windows 95/98 Beer until their friends try Windows 2000 Beer and say they like it. The ingredients list, when you look at the small print, has some of the same ingredients that come in DOS and Mac Beer, even though the manufacturer claims that this is an entirely new brew.

Windows NT Beer:
Comes in 32-oz cans, but you can only buy it by the truckload. This causes most people to go out and buy bigger refrigerators. The can looks just like Windows 95 Beer's, but the company promises to change the can to look like Windows 2000 Beer's, after Windows 2000 Beer starts shipping well. Touted as an "industrial strength" beer, and suggested only for use in bars. 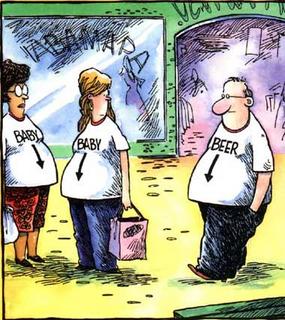 Comes in several different brands, in cans ranging from 8-oz to 64-oz. Drinkers on Unix Beer display fierce brand loyalty, even though they claim that all the different brands taste almost identical. Sometimes the pop-tops break off when you try to open them, so you have to have your own can opener around for these occasions, in which case you either need a complete set of instructions, or a friend who has been drinking Unix Beer for several years...

AmigaOS Beer:
The company has gone out of business, but their recipe has been picked up by some weird German company, so now this beer will be an import. This beer never really sold very well, because the original manufacturer didn't understand marketing. Like Unix Beer, AmigaDOS Beer fans are an extremely loyal and loud group. it originally came in a 16-oz can, but now comes in 32-oz cans too. When this can was originally introduced, it appeared flashy and colourful, but the design hasn't changed much over the years, so it appears dated now. Critics of this beer claim that it is only meant for watching TV anyway.

Now we must pause for a beer commercial.

Then onto the news... tragedy on Highway 9. 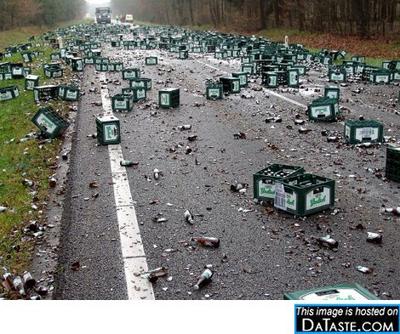 To keep up with beer news, you could bookmark this website. If you are planning your vacation around beer, there are plenty of beer festivals in the near and far future. You want to brush up on how to get the most out of a beer festival. The most what? Beer, supposedly.

This report wouldn't be complete if I didn't include a beer game. 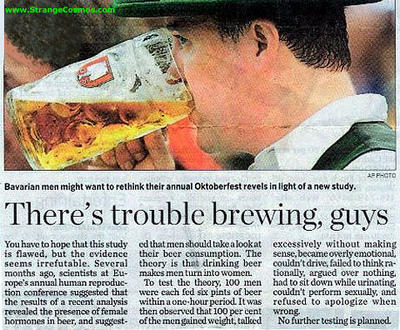 Sometimes when I reflect on all the beer I drink, I feel ashamed. Then I look into the glass and think about the workers in the brewery and all of their hopes and dreams. If I didn't drink this beer, they might be out of work and their dreams would be shattered. I think, "It is better to drink this beer and let their dreams come true than be selfish and worry about my liver."
-- Babe Ruth

When I read about the evils of drinking, I gave up reading.
-- Paul Hornung

Beer is proof that God loves us and wants us to be happy.
-- Benjamin Franklin

Without question, th e greatest invention in the history of mankind is beer. Oh, I grant you that the wheel was also a fine invention, but the wheel does not go nearly as well with pizza.
-- Dave Barry

Remember "I" before "E", except in Budweiser.
-- Professor Irwin Corey

To some it's a six-pack, to me it's a "support group." Salvation in a can!
-- Leo Durocher

One night at Cheers, Cliff Clavin explained the "Buffalo Theory" to his buddy, Norm

"Well ya see, Norm, it's like thi s: A herd of buffalo can only move as fast as the slowest buffalo. And, when the herd is hunted, it is the slowest and weakest ones at the back that are killed first. This natural selection is good for the herd as a whole, because the general speed and health of the whole group keeps improving by the regular killing of the weakest members. In much the same way, the human brain can only operate as fast as the slowest brain cells. Excessive intake of alcohol, as we know, kills brain cells. But naturally, it attacks the slowest and weakest brain cells first. In this way, regular consumption of beer eliminates the weaker brain cells, making the brain a faster and more efficient machine.
That's why you always feel smarter after a few beers

Thought for today: It ain't the jeans that make your butt look fat.

A glaring ommission I noticed right off. But someone geekier than I will have to write that one up and add it!

I'd volunteer to help get you back to writing for Fridays but I'm too old and too far away. I have used many of those "beers" over the years since the early 80s. The biggest change for me other than the graphic interface is the huge size of the code in today's programs. No one writes in assembler anymore and the others all are a lot larger. Of course the hardware to support it is available and cheap so it works okay. But, the programs are a lot slower operating than many of those old ones operating on much simpler operating systems.

Will somebody in or near Kentucky PLEASE ask Miss Cellania out!? We need fresh humor fixes on Fridays!

Macs are NOT lite!

Macs make Windoze beers look like water. You drink a Mac, you imbibe nectar of the Gods. And anyone who says otherwise, I'll strike them down with a lightning bolt!

Linux Beer....no one buys it, they steal it. Tastes OK, but it has too intricate a flavor for most people to understand. Drink only in front of penguins.

Why are there so many varieties of beer that all contain the same variety of alcohol?

Dick, I have no idea what you are talking about. Were you a beer assembler?

John, what, you don't like beer? You think I would believe you've read ALL my posts? Yeah, it could get pretty bad...

Carl, I concur. Once you Mac, you never go back.

Hoss, beer is all the same to me, too. I prefer whiskey anyway.