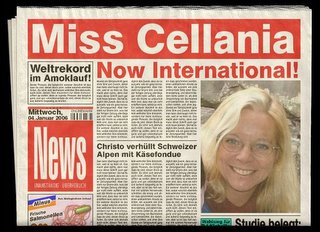 Lots of great links found their way into my inbox this week! Thanks to everyone who contributes to the pool. Once again I threw out about half of what I was going to include, just to keep to a managable level. Don't feel you have to go to every link today, because I may have some linkless posts next week... or maybe not.

I got a ton of new readers yesterday, thanks to Mark and The Carnival of Cars, thank you very much!

Why do Asian girls go for white guys? Why can't Asian guys compete? This movie is called Yellow Fever. Its 15 minutes long, so load it when you have something else to do offline. Funny and thought-provoking.

The story of one man’s response to a Nigerian 419 scam. THIS is FUNNY, but trying it yourself is not recommended.

The Love Calculator will tell you what the odds are of a great relationship by entering the names of two people. I tried it. Got horrible results with first names, last names, screen names, radio names... then I finally read the instructions that said real first name and real last name. OK. Bingo! 83% odds of making it!

How to tell is somebody is lying to you.

Distorted Tunes Test. (lifted from Omegamom) I scored 100%, but it was painful to hear some of these tunes played so badly. I have such a good ear for music that I'm fully aware of how badly I sing! 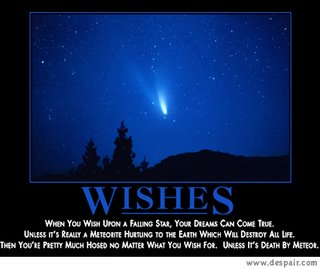 Women are like apples on trees. The best ones are at the top of the tree. Most men don’t want to reach for the good ones because they are afraid of falling and getting hurt. Instead, they sometimes take the apples from the ground that aren’t as good, but easy. The apples at the top think something is wrong with them, when in reality, they’re amazing. They just have to wait for the right man to come along, the one who’s brave enough to climb all the way to the top of the tree.

Men are like fine wine. They begin as grapes, and it’s up to women to stomp the shit out of them until they turn into something acceptable to have dinner with.

Jumping rope is for sissies. To really impress someone, jump a rope thats on fire!

A breast you can keep on your desk and squeeze whenever you want.

The Museum of Unworkable Devices. This should keep you busy for hours.

This is just too neat not to pass along. Get your profile lathed in wood.

Many ways to recycle corks. Makes you wonder what they did with the bottles!

Diary of giving up smoking.

Video: girl is thrown through a basketball hoop. 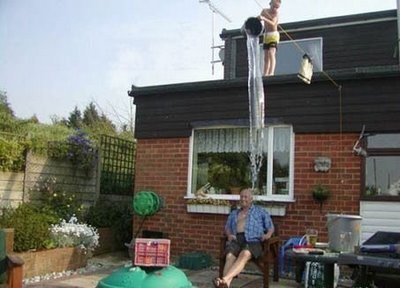 Talk about timing! There's a great punchline here. Probably more than one. What do YOU make of this?

Sitting together on a train, traveling through the Canadian Rockies were an American guy, a Canadian guy, a little old Greek lady, and a young blonde girl with large breasts.

The train goes into a dark tunnel and a few seconds later there is the sound of a loud slap. When the train emerges from the tunnel, the American has a bright red hand print on his cheek. No one speaks.

The old Greek lady thinks: The American guy must have groped the blonde in the dark and she slapped his cheek.

The blonde girl thinks: That American guy must have tried to grope me in the dark, but missed and fondled the old lady and she slapped his cheek.

The American thinks: The Canadian guy must have groped the blonde in the dark. She tried to slap him but missed and got me instead.

The Canadian thinks: I can't wait for another tunnel, just so I can smack the American again. 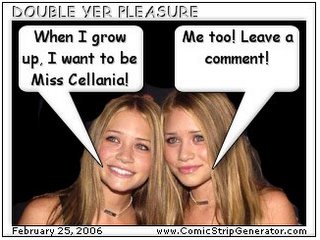 I remember this joke from when I was a kid, except then it was a Frenchman instead of a Canadian, giving the storyteller an opportunity to affect an accent. Thanks to Carl for bringing this deserving joke back (I think he added the part about large breasts himself)!


Thought for today: Originality is the art of concealing your sources.

I'm spending wayyyy too much time here. But having loads of fun! :)

FANTABULOUS blog today! My DNA is Creator which makes sense since I'm a biz owner. And the boyfriends' daughter is definately tone deaf, and qualified for the study(we sent them our info so that she can volunteer). The skater video was MARVELLOUS and the kids played the streaking game. I spent LOADS of time on this today. Whew. Gotta go.

Just getting caught up on your blog and am dying! YOu've got some great stuff here. I think I'll spend my lunch hour hanging out here!

Miss C, your blog never ceases to amaze me! I have no idea how you get it all done but I promise when I get home tonight I will do everything in my power (either before or after "24") to get it all read!.

I don't know what part of KY you're from but I grew up in Huntington, WV (we owned a business in Ashland).

Thanks for stopping by my blog but today I came by way of FTS. Dang it. I had Carolina beating Duke in the finals, so my brackets are toast. GRRRRR.