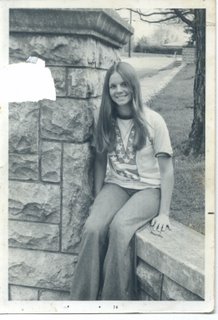 Looks like the scanners have been getting quite a workout! Have you notices, there are a lot of childhood pictures posted on blogs lately. There are almost NO childhood photos of me, due to a complete and total housefire not long before I left for college. However, I recently found this rare photo among my husbands' keepsakes. Its the little hippy-chick Miss Cellania as a young teenager. Once again, I am willing to totally embarass myself for your amusement. And since its the last day of the month, its time for an index and a "best of" post.

February was a good month for this site. The Olympics brought a ton of visitors, all looking for footage of athletes slipping and sliding on the ice and snow, even though it was a January post. My Funny Valentine was also a hit. Fun with da Net was the post with the most hits, and Size Matters was the one most discussed. February also brought the end of my smoking habit. Thanks to so many of you who have offered advice and support. I had no idea how many ex-smokers I know! I still have a problem loading any blogspot.com site. I consulted some of the geekiest people on the planet, and they are all stumped. The most common explanation is that someone put a hex on my computer. That doesn't stop me! You may also notice I am trying to improve the looks of my bargain-basement template. That can be dangerous for someone as tech-ignorant as I am, so if the whole thing goes kablooey, I may be calling up the geek squad again for help! 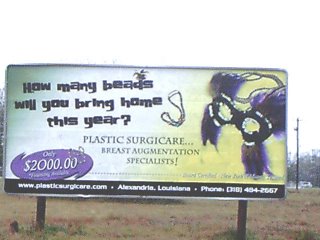 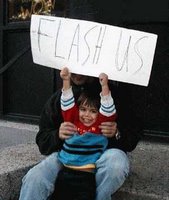 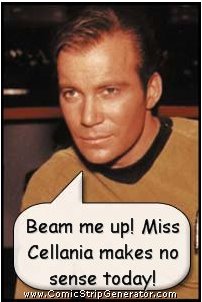 Music Video: Bush and Blair at the Gay Bar.
Video of Los Angeles at night.
Torn, performed in mime.
A man with three balls.
Broke Mac Mountain.
Brokeback to the Future.

TOOLS
Make your own South Park character at Planearium.
The Death Psychic.
Here's my Mugl 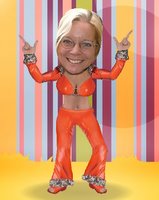 et.
Try this 3D Face Generator.
Anagram Genius.
Can you tell someone's race by looking? Take the test.
Write your name in Egyptian heiroglyphics!
Create A Graph program.
Charles Vestal’s quailhunt story generator.
Determine your energy patterns through your name.
At Reincarnation Station, find out whether you'll come back as a lower life form.
The Five Factor Personality Test 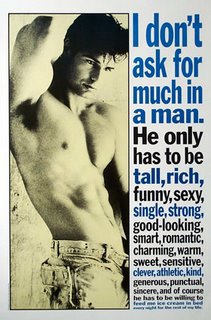 Check this new sidebar button. It links to this site. If you want, I'll send you the code.

Cute picture! Considering how styles ebb and flow it actually looks like it could be a fairly recent picture as well. I'm sorry that the things of your childhood were wiped out in a fire. Although I don't look at them often or anything I would hate to not have my childhood pix, etc.

Carl, it really didn't bother me like it could have. It was a great lesson on how few "things" you really need, and how very important friends and family are.

That's a great picture of you! I miss the days when we could wear our hair long and straight ... no moose, no muss, no fuss.
Penny

Aw, I love the photo! Yes, there have been a bunch of childhood pictures lately. I'll have to go digging and see what I can find around here I think.

I brought a big plastic box of snapshots and my scanner along on this RV trip. I have a goal to try to scan most of our snapshots as well as the more formal ones into digital files. I sure wish that (1) we had done a better job of writing down the who, when and where on each of them and (2) I had more photos of the one who was usually behind the camera taking most of the pictures.

Love the photo! And thanks for the link to my "early photos". What fun it is to visit here. :-)

Your photo is so beautiful!!

Woah! I never thought I would finally come across a kundalini kundalini rapport attract women exceedglobalcouk type of site. I have totally been searching for this high and low. I hope my blog readers like this resource because it gives you precise information. Really cannot go into much detail here as I am totally absorbed on the site right now, but thought I would pass it along in case anyone might find it useful. Okay, I am off here. Later!
kundalini kundalini rapport attract women exceedglobalcouk

Hello Friend! I just came across your blog and wanted to
drop you a note telling you how impressed I was with
the information you have posted here.
Keep up the great work, you are providing a great resource on the Internet here!
If you have a moment, please make a visit to my touch dog toys site.
Good luck in your endeavors!