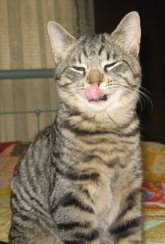 My new kitten Biscuit looks like a full-grown cat in miniature. I think he’s about 12-14 weeks old. That would put him on par with a 5-6 year old human boy. In this case, that boy would be Dennis the Menace. If there is a stack of important papers on my desk, he will knock them off one by one. He LOVES grapes... not to eat, but to bat around on the floor like a ball. His preferred food is anything we people are eating, so he gets locked up at mealtimes. He leaps into the refrigerator every time the door is opened, twice getting shut up in it. He has a very loud and incessant maaaaoww. He loves to run across my keyboard and cancel whatever I’m downloading, and he loves to chase that infernal cursor across the screen. But his most cherished entertainment is watching the toilet flush. He is very tolerant of the girls carrying him around, dressing him up, and giving him baths. He has become the master of the ankle ambush. Its fortunate for him he’s so CUTE!

Laser beam cat toy. For those who are just too busy to play with the cat.

Meow Mix Cafe, the restaurant for cats. For those just too busy to feed the cat. 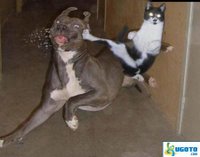 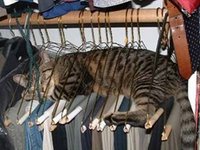 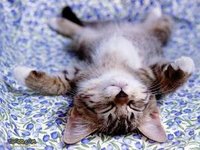 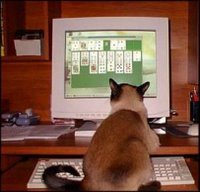 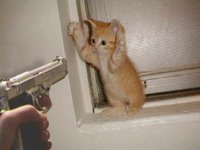 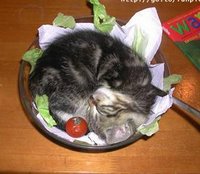 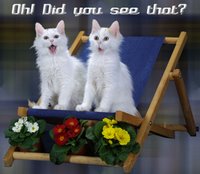 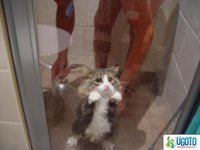 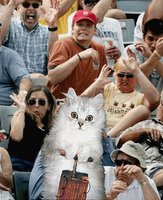 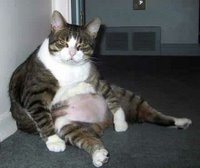 Calling in sick to work makes me uncomfortable. No matter how legitimate my illness, I always sense my boss thinks I am lying.

On one occasion, I had a valid reason, but lied anyway because the truth was too humiliating. I simply mentioned that I had sustained a head injury and I hoped I would feel up to coming in the next day. By then, I could think up a doozy to explain the bandage on my crown. The accident occurred mainly because I conceded to my wife's wishes to adopt a cute little kitty.

Initially, the new acquisition was no problem, but one morning I was taking my shower after breakfast when I heard my wife, Deb, call out to me from the kitchen, "Ed! Ed, the garbage disposal is dead. Would you come and reset it, please?" 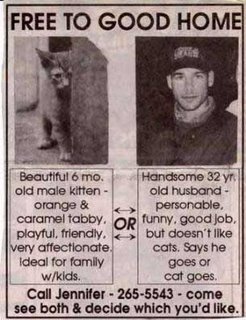 "You know where the button is," I protested through the shower ( pitter-patter). "You can reset it yourself."

So out I came, dripping wet and buck nekkid, hoping to make a statement about how her cowardly behavior was not without consequence.

I crouched down and stuck my head under the sink to find the button. It is the last sane action I remember performing.

It struck without warning, without respect to my circumstances. Nay, it wasn't a hexed disposal drawing me into its gnashing metal teeth.

It was our new kitty, clawing playfully at the dangling objects she spied between my legs as I knelt there. She had been poised around the corner and stalked me as I took the bait under the sink.

At precisely the second I was most vulnerable, she leapt at the new toys I unwittingly offered and snagged them with her needle-like claws. I lost all rational thought to control orderly bodily movements, while rising upwardly at a violent rate of speed, with the full weight of a kitten hanging from my nether region.

Wild animals are sometimes faced with a "fight or flight" syndrome.

Men, in this predicament, choose only the "flight" option. Fleeing straight up, the sink and cabinet bluntly impeded my ascent. The impact knocked me out cold.

Having been fully briefed by my wife, the paramedics snorted as they tried to conduct their work while suppressing hysterical laughter.

At the office, colleagues tried to coax an explanation out of me. I kept silent, claiming it was too painful to talk about.

"What's the matter?
Cat got your tongue?"

This video contains lots of strange and classic cat clips.

25 Laws About Cats (lifted from Wulfweard)

1 - Law of Cat Inertia
A cat at rest will tend to remain at rest, unless acted upon by some outside force - such as the opening of cat food, or a nearby scurrying mouse.

2 - Law of Cat Motion
A cat will move in a straight line, unless there is a really good reason to change direction. 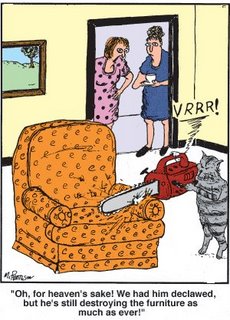 3 - Law of Cat Magnetism
All blue blazers and black sweaters attract cat hair in direct proportion to the darkness of the fabric.

4 - Law of Cat Thermodynamics
Heat flows from a warmer to a cooler body, except in the case of a cat, in which case all heat flows to the cat.

5 - Law of Cat Stretching
A cat will stretch to a distance proportional to the length of the nap just taken.

6 - Law of Cat Sleeping
All cats must sleep with people whenever possible, in a position as uncomfortable for the people involved as is possible for the cat.

7 - Law of Cat Elongation
A cat can make her body long enough to reach just about any counter top that has anything remotely interesting on it.

8 - Law of Cat Acceleration
A cat will accelerate at a constant rate, until he gets good and ready to stop. 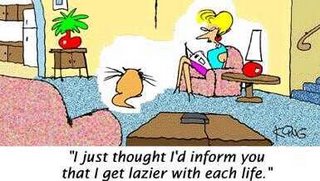 9 - Law of Dinner Table Attendance
Cats must attend all meals when anything good is served.

10 - Law of Rug Configuration
No rug may remain in its naturally flat state for very long.

11 - Law of Obedience Resistance
A cat's resistance varies in proportion to a human's desire for her to do something.

12 - First Law of Energy Conservation
Cats know that energy can neither be created nor destroyed and will, therefore, use as little energy as possible. 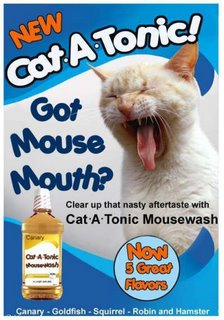 Cats also know that energy can only be stored by a lot of napping.

14 - Law of Refrigerator Observation
If a cat watches a refrigerator long enough, someone will come along and take out something good to eat.

15 - Law of Electric Blanket Attraction
Turn on an electric blanket and a cat will jump into bed at the speed of light.

16 - Law of Random Comfort Seeking
A cat will always seek, and usually take over, the most comfortable spot in any given room.

17 - Law of Bag / Box Occupancy
All bags and boxes in a given room must contain a cat within the earliest possible nanosecond.

18 - Law of Cat Embarrassment
A cat's irritation rises in direct proportion to her embarrassment times the amount of human laughter.

19 - Law of Milk Consumption
A cat will drink his weight in milk, squared, just to show you he can.

20 - Law of Furniture Replacement
A cat's desire to scratch furniture is directly proportional to the cost of the furniture.

21 - Law of Cat Landing
A cat will always land in the softest place possible.

22 - Law of Fluid Displacement
A cat immersed in milk will displace her own volume, minus the amount of milk consumed.

23 - Law of Cat Disinterest
A cat's interest level will vary in inverse proportion to the amount of effort a human expends in trying to interest him.

24 - Law of Pill Rejection
Any pill given to a cat has the potential energy to reach escape velocity.

25 - Law of Cat Composition
A cat is composed of Matter + Anti-Matter + It Doesn't Matter.

More laws about cats: (Thanks, Julian!) 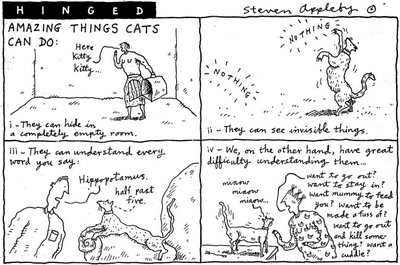 See the video to the famous Superbowl Cat Herding spot. (thanks, Wulfweard!) 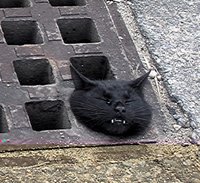 Cat gets head stuck in drain.

These folks have remodeled their house specifically for their 140 cats.

Riba is a 6 minute movie about a cat who dreams of becoming a pianist. Nice! Its a cartoon AND an art film.

Talking cats. Really. You will love this!

ER published a wonderfully erudite poem in tribute to his cat Ice-T. 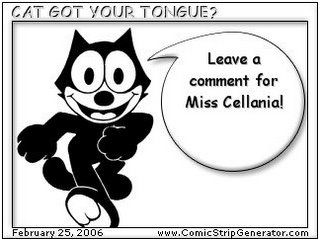 Viking Kittens. You knew I couldn't resist putting that one in.

This is one ugly cat.

Thought for today: The trouble with a kitten is that when it grows up, it's always a cat. -Ogden Nash

PS Those of you of the male persuasion need to help out a lady with a question. Women are welcome, too.

Have you seen the Cat Herder video
http://www.extremefunnypictures.com/funnypic740.htm

Biscuit sounds like a lot of fun! Thanks for stopping by my blog. I love cats too. I miss my little calico Spicey.

The story about the kitten and the genitals brought back a really painful memory. Been there, done that, damn near stir-fried the kitten.

Another great post. I always liked Cornish Rexes, because they're relatively hypoallergenic for cats. And I LOVE cats but am TERRIBLY allergic to them. Even this post made me sneeze! I adore the valhalla cats. Sorry the piano cat link has exceeded its bandwidth... ;P

You picked one of my favorite things to post about! Your kitten is so cute and is getting big.

Loved the pics and the fun links.

HOW could you forget my portfolio picture, Miss C????

Hi. I liked the funny pics. By the way, i just made a post about your blog.

I have had a fear of that ... one of our cats likes to sit on the water closet because it is cool, especially in the summer.
...I can't help but think the cat might think a pink mouse is being offered when I take a leak.
...So far, no incidents, but I pay as much attention to the cat as I do to my aim.

I think my cat and your kitten are long-lost brothers... :)

HE he...How come you`re blogging about it when you couldnt tell the incident to people in person? The links were good too. I`ll surely blog about your blog when I`m posting next.