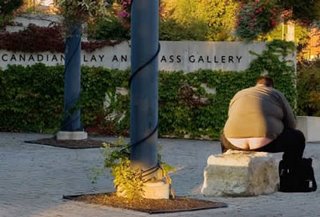 The month of April started out foolishly, like it always does, and ended with a bang, as I am out of town today on a much-needed outing. I may even tell you the story someday, but not now. The most popular posts in the month of April were Underwear and Does My Butt Look Big in This? so I know where YOUR minds are. Since I aim to please, you may see more of that sort of thing. I also got a lot of response about the Mr Right post, from the guys I cited (I have met a LOT of guys in through the Blogosphere!) and the guys I didn't cite (sorry). This month I also became a Star Trek character, thank you Captain Picard. The Presurfer and Neatorama both gave me some ego strokes worth noting. And I found out Arbroath is a guy! I case you missed some of the posts, or joined us here late, here are the most popular links for the month of April. Plus some that I just plain wanted to keep where I can find them easily. I do this at the end of each month, so when you open one of the monthly archives (at least the later ones), you'll see a "best of" post first. 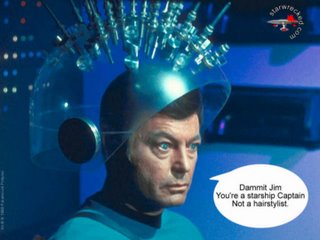 QUIZZES
'What is the best type of sex for you?'
What Classic Movie Are You?
The quiz that really makes sense.
The Urinal Game.
The Underwear Oracle
The Idiot Test.
Belief-O-Matic test.


GAMES
Shoot the Easter Bunnies in Bunny Hunt.
A game where you have to find a particular person in a crowd.
From Space with Love.
A little game of Grab Ass.
The Phone.
Fat Man.

VIDEOS AND CARTOONS
The Wedgie Song.
How NOT to get a bear out of a tree!
I’m the Decider.
The Guantanamo Bay Song
The Picard Song
Smoking can seriously damage your health.
Top Ten Classic Viral Videos.
N is for Nookie. 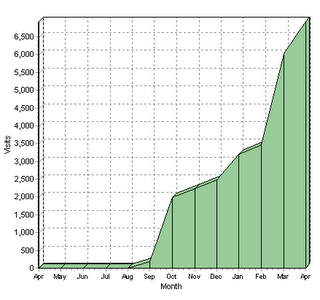 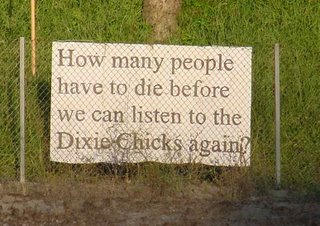 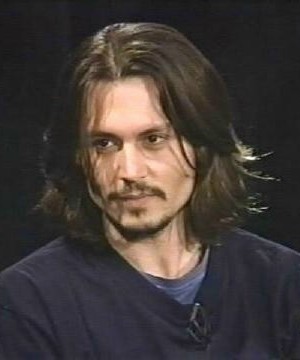 The number one most popular photo in April. So I'm posting a somewhat larger version.

Thought for today: I didn't say it was your fault. I said I was going to blame you.

A great collection for April! Please drop by for my First Blogaversary!

Good Dixie Chick sign, and good question . . . Reminded me of Blowing in the Wind, by Bob Dylan

Thanks for the shout out! We're happy to have found a new friend in the blogosphere.

Come back early and often!

April was a good month, thanks for all your work!

My vacation cup runneth over. (Nice to hear from you, Missy.)

apparely im a rough sex type of guy... who knew?

Anyways, i know we dont tell you this, byut we appreciate all you do here :) Keep on keeping on, especially for those of us who have to go and become serious Individuals. :(

Hahahaha - so I take it you're one of the legions of Capt. Jack Sparrow fans?

Miss C., I am always amazed at the stuff in your blog! Where do you get all these links? :)