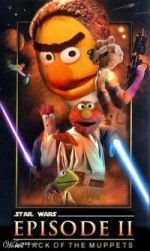 When I began to collect funny and strange things about the Muppets, I kept coming across more and more Star Wars tie-ins. So many, that I feel they deserve their own post.

The links between Star Wars and The Muppets are varied and plentiful. I like the sound of that! Lets all say it together... “varied and plentiful.” I’ll have to remember that and use it again. Both Star Wars and The Muppets are popular with kids, who still like both when they reach adulthood. Both use funny-looking creatures. Both employ Frank Oz. Both have a lucrative toy marketing franchise. And then there’s Jar Jar Binks, which makes you think of a Muppet, but none of the Muppet people will claim him. They will be glad to claim Chewbacca.

In 1980, Mark Hamill guest starred on The Muppet Show. Therefore, all the other Star Wars characters had to make an appearance. I found a synopsis of this lunacy. More images here. And a scene right here!

Then we heard that Frank Oz, muppeteer extraordinaire, second only to Jim Henson on the creative side of the muppets, was going to do a character in the second Star Wars film (episode 5 for you young ‘uns) named Yoda.

Which muppet character would it be? They had screen tests to see who would make the cut.

A song to set the mood: The Star Wars Cantina. 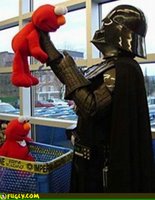 In 1999, the muppets did their own space movie, Muppets from Space. 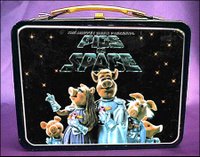 Which was a natural progression from the earlier skit Pigs in Space.

The Top 12 Things Uttered by Yoda During Sex 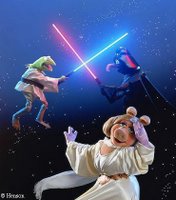 9. "Foreplay, cuddling - a Jedi craves not these things."

5. "You know, this would be a lot more fun without Frank
Oz's hand up my ass." 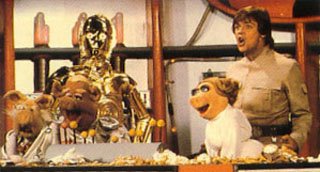 4. "Happens to every guy sometimes this does." 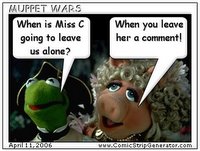 May the farce be with you.

PS A big congratulations to Joel and family on the arrival of their newest daughter Mona, born Thursday April 6th. Boy howdy, thats almost a week ago and I'm just now discovering it? Blame it on Blogger, since I once again cannot load blogspot.com sites. Including this one.

I'd be the cute Beaker!

ROFL at the list of things Yoda utters during sex. What a riot.

Miss C, thanks for the terror alert level indicator. It's gotten quite high comments on my blog!

I'm so terribly sorry to hear of Vader's loss...

That was side-splitting! I loved Yoda's sex lines.

Wow, I think I've found the winning combination... Star Wars and sex. And Muppets, maybe. Yoda having sex is the most incongruous thing ever, I'd reckon.

I thought the most popular part would be Darth and Elmo, but I didn't dress up that link enough for anyone to try it (except Saur).

I would like to tell everyone I know about a new web site for web page hosting... If you are looking on ways to mkae money starting a business and need a site to host it on . Visit http://webhost-er.com/ Today