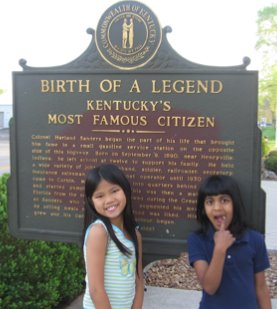 Alex over at Neatorama wrote a piece entitled Four Neat Things about Los Angeles. Its a "meme". Then tagged me (I'm not worthy!) to write Four Neat Things about my hometown. I had to think about that. My town is SO small (chorus: how small is it?) that 1. if I wrote about it, I would lose the very last shred of anonymity I have left, and b. I can only think of two neat things about it that would interest you. So I am expanding my theme (or meme) to include all of Kentucky. After all, Alex changed the meme somewhat; I can too! And since my entire state has about half as many people as the city of Los Angeles, it doesn't seem too much like cheating. BTW, if Neatorama calls it "Neat Things about My Hometown", maybe I should call this "Miss Cellaneous Things.. "? Naw, that's just dumb. Can't have any of that here! I will include some jokes for those who would expect such.

Pictured here are Princess and Gothgrrl acting like tourists. I'm sure you can figure out which one is which from the poses.

4 Neat Things Kentucky is Famous For 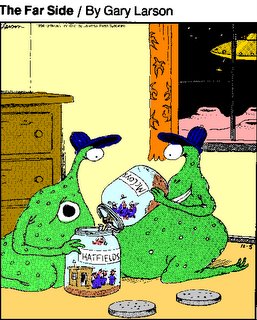 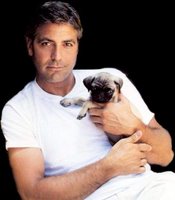 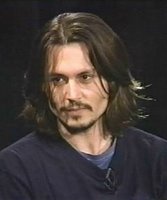 4 Neat Kentucky Sports Figures
A state which has no major professional teams in football, basketball, baseball, or hockey nevertheless has some legends. You just never think about them. 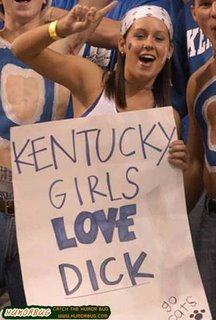 The owner of a golf course in Kentucky was confused about paying an invoice, so he decided to ask his secretary for some mathematical help. He called her into his office and said, "You graduated from The University of Kentucky and I need some help. If I were to give you $20,000, minus 14%, how much would you take off?"

The secretary thought a moment, then replied, "Everything but my earrings."

You gotta love those Kentucky women.


4 Kentucky Products
Our economy is based on the premise: "We don't care what's good for you, we only care whether you want to buy it."
1. Bourbon
2. Marijuana
3. Tobacco
4. Coal

After living in the remote wilderness of Kentucky all his life, an old hillbilly decided it was time to visit the big city. In one of the stores he picks up a mirror and looks in it. Not knowing what it was, he remarked, "How about that! Here's a picture of my daddy."

He bought the 'picture', but on the way home he remembered his wife, Lizzy, didn't like his father. So he hung it in the barn, and every morning before leaving for the fields, he would go there and look at it.

Lizzy began to get suspicious of these many trips to the barn. One day after her husband left, she searched the barn and found the mirror. As she looked into the glass, she fumed, "So that's the ugly bitch he's runnin' around with."

Other sites responding to the tag:
Stuff on Fire did Cincinnati.
Scribal Terror also did Cincinnati.
The Presurfer did Tilburg, in the Netherlands.
Now I reckon I'm supposed to tag other folks. OK, lets keep it casual. If you are on my blogroll, you are tagged. So how easy that was? If you're not and want to participate anyway, go ahead! Let me know about it, so I can read about your hometown.

The only times I went back east were to Cincinnati. There was a comedian in a local bar named Kevin who really dissed the hillbillies from Kentucky. But I remember flying into their airport, which is in Kentucky, and seeing the dirty gray city on one side of the river and the beautiful green on the other side. I know in which place I would rather live!

This is fantastic, Miss C!

1. I have done two columns regarding this particular notion (and have a copy of that 'travel back in time' ad, somewhere; I sent the guy a snail mail to the stated addy, but never got a reply. Guess I missed him...or he ain't received the letter yet... *snort*). Trust me when I tell you: neither worked.

2. Interestin' Kentucky factoid ;-) I'd do up one for Colorado, but I'm not a native; so I'd have to do mine on Iowa. And you can get non-prescription sleep aids at the drug store, which are easier than reading my blog...

And the Kentucky State Insect?

Stinkbug (according to me).

Johnny Depp born in Kentucky? Wow! Very good job on that one!

Beautiful places there too.

Your stories of Kentucky girls got me convinced!

I picked this one up and ran with it here. As it happens, I'm currently working on the newspaper's tourism guide for the area, so I was already thinking along these lines.

You make Kentucky sound appealing for reasons besides the fact that it contains you!

MC, I worry about you every time I watch the weather report. I hope you're avoiding those storms they keep talking about, and that you are staying safe and dry in Kentucky.

Dick, I, too, would rather hang with hillbillies than with mean people.

Skunk, I've never found anything you've written to be boring.

Hoss, I would suggest gnats. They are everywhere! The stink comes from elsewhere.

Carl, Bourbon is right there in the KY Products list. And Kentucky Woman SHOULD be the state song!

Heather, Karen, and BJ, I concur. I had a list of two, but its supposed to be four, so I added Ashley for the guys, and Billy Ray is NOT ugly. Not in George or Johnny's league, but he's OK.

RockyJay, come on up! You'd have a great time.

Ed, its downpouring here, but that's typical. Its monsoon season. Storms don't bother me, its just more work when I'm on the air.

I've never been to Kentucky, but Johnny Depp just might convince me to make the trip... :)

And Kentucky Woman SHOULD be the state song!

Maybe so, although I inexplicably think of Elvis' "Cold Kentucky Rain."

LOL! This was great. I know who Cayce is and Johnny Depp is HOT!

Monique, alas, he doesn't live here now, but he visits family on a rare occasion. George comes back often!

Joel, me too! But the Neil Diamond song is less depressing.

Nancy, you betcha! The interesting list folks are all dead, except Henry, who is in jail. The eye candy folks are all alive and WELL.

Good stuff! I'm afraid to challenge the monkey - I may embarrass myself. Loved all the jokes! And thanks for that picture of Johnny Depp.

Great blog! From one Kentucky gal to another. Unfortunetly, I don't get to live there any more and am stuck in IN. You forgot to mention that Tom Cruise is also homegrown.

P.S....my daughter waited on Johnny and family when he returned to Lex for Halloween several years ago. He was very nice and very down to earth...so she says. Oh, and very drop dead georgous. His Mom lives in the Chevy Chase area.

Ivy, if I'd known it would be that popular, I could come up with 100 photos of Johnny Depp. Mmmm, that may be an idea!

Mary, I didn't include Tom Cruise because he wasn't born in KY, although he did go to high school here. And because he's a nutjob. I'm sorry you are stuck in Inidiana!