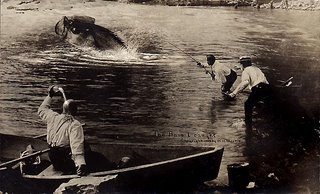 My Dad had a surefire way to avoid mowing the lawn. He’d get up real early in the morning on his days off and go fishing. You have to get up real early, you know, because the fish bite early in the morning. That doesn’t mean that he’ll be home in the afternoon, oh no, because the fish bite then, also. And in the evening. By the time he got home, darn it, it would be too dark to mow. but not too dark to clean fish and act like a breadwinner. We ate lots of fish when I was a little kid, with millions and millions of little bones in it. It didn’t seem quite worth it to me, especially when I saw how dad cleaned those fish. And he’d take us kids with him whenever he got the chance, meaning, when we would get up early. I enjoyed fishing, as long as Dad would bait the hook, help me reel it in, and unhook the fish. I was really talented at standing on the bank holding a pole.


Check out this flying fish video! Its a pretty good day when they just jump in the boat.

Video: A fisherman gets pulled into the water by a huge fish.

Why you won’t find me ice fishing.

Record bass caught and released on a technicality. (via Neatorama)

Here’s a fishing game that’s so easy, even I could do it! 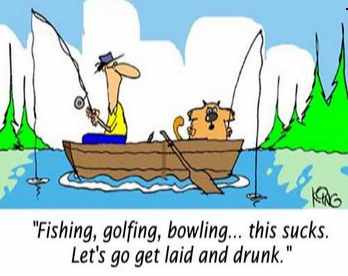 David, the fisherman, had driven by the lake many times and had seen some other anglers about, so he decided to give his luck a try.

On his first day of fishing he had no luck at all but noticed that another fisherman near him that was scooping in one after another. He had to know The Secret. "Excuse me sir, but would you mind telling me what sort of bait you are using?" he asked.

The other man looked around a bit embarrassed. "Well, I am a surgeon, and quite by accident I found that human tonsil works very well."

David thanked the man, thought about what sort of bait to try next time, and left.

The next day, David returned to the lake, tried a different bait and still had no luck. Just as the day before, there was yet a different man reeling in fish after fish. "Excuse me," asked David, "but could you suggest a bait that I could try?"

"Well, I can, but I am not sure it will do you any good. I am using a bit of human appendix."

"Hmm," thought David. It seemed that the fish in this lake would require a little more effort than normal. He left, willing to give the lake one more try.

On the third day, David still had no luck. As was usual, there was yet another man near him bringing in fish left and right. David wanted to confirm what he already knew. "Excuse me sir, but are you a doctor?"

One man's hobby was fishing. He spent all his weekends near the river or by the lake, paying no attention to weather. One Sunday, early in the morning, he went to the river as usual. It was cold and raining, so he decided to return back to his house.

The man came in, went to his bedroom, undressed and lay near his wife. The lights were off and he snuggled up behind her. She didn't even turn around.

"What terrible weather today, Honey," he said to her.

"Yes, she answered. "And my idiot husband went fishing."


Why Fishing is Better than Sex (Thanks, Joe!) 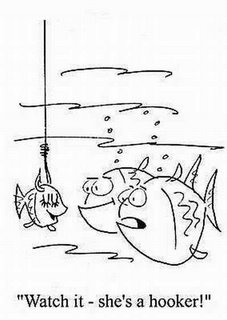 - Fish don't compare you to other fisherman, and neither do they want to know how many other fish you caught.

- You can catch and release a fish, and you don't have to lie and promise to still be friends after
you let it go.

- You don't have to necessarily change your line to keep catching fish.

- You can catch a fish on a 20-cent nightcrawler. If you want to catch a woman, you're talking
dinner and a movie minimum.

- Fish don't mind if you fall asleep in the middle of fishing. 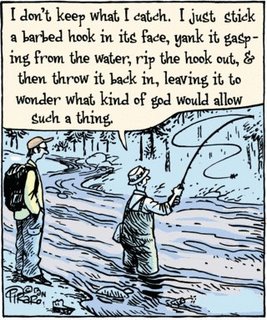 
Thought for today: "Many men go fishing their entire lives without knowing it is not fish they are after." -Henry David Thoreau