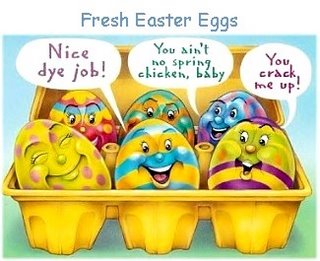 Easter resembles Christmas in that it is a most sacred holiday which has been associated with secular symbolism, the purpose of which is to get people to celebrate it. Of course, the modern motivation is to sell candy. Yes, when the church established an Easter celebration, pagan rites of spring and the earth’s renewal became intertwined with the religious celebration, and has been ever since. What could symbolize spring and renewal better than an egg? Maybe cute baby animals, of which there are plenty in Easter symbolism. Lots of symbols to make jokes about!

Peeps are a joke in themselves. They are supposed to be some kind of candy, but they never seemed soft or tasty enough for me to consider them anything but decoration. Human ingenuity has found many other uses for peeps!

All you need to know about peeps can be found at Peep Research. (Thanks, Dawn!)

Peep Jousting is a sport anyone can compete in! It's fun at Halloween, too.

More research details the effects of smoking and drinking on Peeps. (Thanks, Amy!)

You have your choice of two games in Peeps in Outer Space!

The Peeps peepshow. Wearing nothing but Peeps.

Music video of Peeps in the microwave.


Reasons to keep all your eggs in one basket. 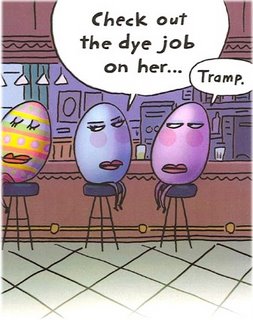 How to make a Giant Creme Egg.

Another catch the eggs game. This one is easier.

This game is different. Shoot the Easter eggs.

Shoot the Easter Bunnies in Bunny Hunt. Easy enough for children, but way too bloody.


T'was The Day Before Easter 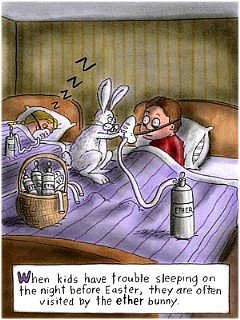 Twas the day before Easter and all through the woods,
The bunnies were busy packing their goods.
The eggs were all colored so pretty and bright,
All things were "go" for the big, special night.

The baskets were waiting, all decorated with care,
In hopes that the Bunny soon would be there.
My little brother Sam was asleep in his bed,
While visions of Easter eggs rolled round his head.

And I in my pajamas with the cat on my lap,
I had just settled down for a quick little nap.
When outside the window I heard a great noise,
I sprang from my chair and jumped over some toys.

As quick as a flash to the window I flew,
I pulled up the shade and , OH, what a view.
The moon on the meadow cast a bright golden glow
And the wind blew the flowers to and then fro.

Then all of a sudden from out of nowhere,
Came some lively bunnies, hopping here, hopping there!
Leading the group with ears long and funny
Was a plump all-white rabbit...
That's right...the EASTER BUNNY!

So up on each doorstep the bunnies did hop,
With baskets of eggs. (Let's hope they don't drop)!
Just at that moment, on the porch down below,
Came the stomping of feet 'Twas the rabbit I know! 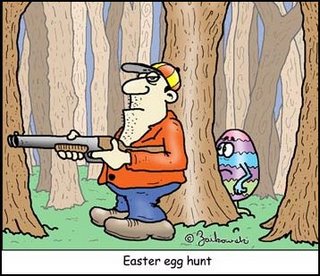 As I stepped from my window I heard a loud sound.
Through the door came the rabbit with a leap and a bound.
He was furry and soft from his head to his feet.
To see him so close was really quite neat.

He was surrounded by eggs that had been carefully dyed.
Easter eggs galore he soon would hide.
His eyes were all twinkles, His nose was so pink,
And I can't be too sure but I think he did wink.

He had a kind face and a big fluffy tail
That bobbed up and down like a boat with a sail.
A twitch of his nose and a flick of his ear
Was his way of saying "You've nothing to fear"

He uttered no sound as he hopped all about,
Hiding the eggs and leaving no doubt,
That the Easter Bunny had come like he does every year...
Bringing baskets of happiness to children so dear

Oh, by the way, the Easter Bunny Hates You!

How to make a bunny lay Easter eggs. (not for children)

Check out the Easter Witch and links to other bizarrely evil Easter kitsch. 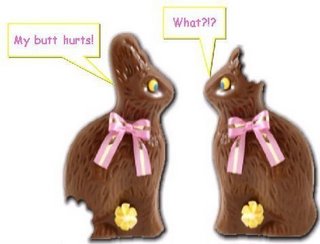 TN Chick had an Easter caption contest, with lots of great entries.


Thought for today: The nice thing about being senile is you can hide your own Easter eggs.

Still got milk coming out of my nose. :)

Happy Easter!! LOL I'm cracking up here... The last pic has been a favorite for a long time.

I always did wonder about those Peeps. I see them every year, but have never actually had one. What ARE they?

I'm surprised you didn't tell the most famous East Bunny joke of all...

A woman opens her refrigerator one Monday morning in April and finds a bunny inside with a basket of brightly colored eggs.

"What are YOU doing in my refrigerator???"

"Dis is a Westinghouse, cowwect?"

Lee (welcome!) and JB, yeah, that ether business cracked me up, too.

Karen, I'd rather eat them than look at them!

Monique, peeps are marshmallow. Marshmallow thats been shaped, played with, frosted, colored, and left out to dry too long. Yeech!

carl, I remember my grandpa telling me that one when I was a kid. I will have to drag up some more of his awful puns.

Saur, I haven't bought or dyed any eggs at all yet! Just got busy.

I told you before: I cannot keep up.

I hope Jesus loves you.

LOL, I loved all of the stuff on here: cartoons, etc.
happy Easter!