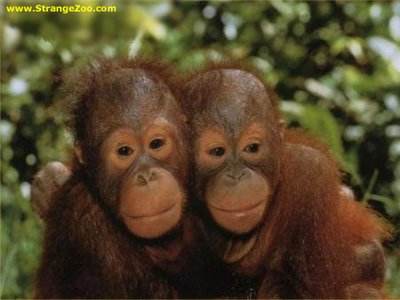 It doesn’t take much for me to start riffing on a subject. I was looking for Mark Longmire’s Romance Novel Covers and found he’s a Planet of the Apes fan; in fact he has retold the story in a most unique way. I thought my friend April (Ape) would enjoy that site, so one thing led to another and now I’ve got all these monkey and ape links and pictures.

One of the first things I found was a great essay on how we live our lives called The Monkeysphere.Then a blog called Helpful Monkey Resources (where I learned that monkeys don't like to use Macintosh computers; they prefer Windows), cakes decorated for monkey parties, and a bunch of strange monkey pictures. 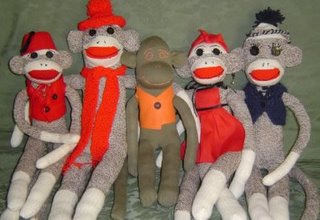 r the Penguin Post . The bad news for monkeys is about the banana supply.

Thinking about monkeys reminded me of this Sock Monkey Movie. If you love sock monkeys (and who doesn’t), Tamara at Sock Monkey Fun will set you up. She'll even custom-make your monkey! The Sharper Image has a chimpanzee for sale that you don’t have to feed or toilet-train!

The Presurfer has just posted a link about the Beer Making Monkeys of Borneo.

Yeah, there is a test involved. I found one where you match wits with a monkey. I barely outscored the monkey (who chose random answers). Not an easy quiz, but fun while it lasts.

I beat the monkey by 17 points.
Famous Monkey Challenge Quiz
Your Final Quiz Score: 33 right out of a possible 60
The Monkey's Final Score: 16 right out of 60

Well done, you have sent the monkey to his defeat. Your score is unquestionably higher, and thus the lowly monkey has been proven once again to be humankind's intellectual inferior. Good work, however your score does leave room for improvement. We should like to see the human dominate even more completely!

You scored in the 80th percentile.
(80% of quiz takers scored worse than you)

A three-year-old boy fell eighteen feet into a zoo enclosure containing seven gorillas. He was immediately rescued, not by zookeepers, but by one of the animals. The 150 lb. female gorilla picked up the unconscious form of the boy and laid it at a door to be easily retrieved to by zookeepers. This cross-species rescue has resulted in thousands of dollars in donations to the zoo. It is perhaps because of these donations that zookeepers have kept quiet about one vital detail, a hastily scrawled note tucked in the boy's collar, "Thanks; but we prefer fruit." 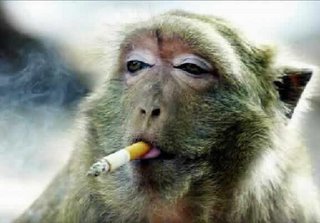 A man reads in the paper of a white gorilla in a zoo far away. He decides that he just has to see it. The journey will be a long and arduous one but he simply cannot resist. He sets out on his trip and travels by car to the docks, and catches a boat across a huge ocean. After weeks of sea travel he arrives at the other side and takes a train to the zoo.

When he sees the white gorilla he can't believe his eyes, it's the most beautiful thing he's ever seen. He simply must get a closer look, so he goes to the zoo manager and begs to be allowed into the gorilla's cage.

After much arguing the man finally persuades the manager to let him in to the gorilla's cage, but before he does he tells the man that whatever he does he must not under any circumstances touch the white gorilla. The man agrees and is led to the cage.

He tip-toes into the cage and is amazed, the gorilla is even more beautiful close up than it was from a distance. The white gorilla just sits quietly and looks at the man. After a while the man gets use to being so close to the gorilla and it seems so peaceful and calm that he starts to think that there can't be any harm in touching the gorilla. He slowly moves closer and closer to it, all the time the white gorilla just looks calmly at him. He reaches out his arm and gently touches the gorilla.

Just as his arm makes contact the gorilla jumps up and starts roaring. The man turns and runs to the exit, getting there just before the gorilla. He leaps through the door and the keepers slam the door just in time.

The gorilla, pulls at the door and to the man's horror the bars start to bend. The man runs out of the zoo and to the train station and jumps on the train, which as luck would have it is just leaving. He glances back and can see the gorilla chasing after the train, but not gaining on it. The train arrives at the docks and the man quickly scampers aboard the boat.

The boat leaves and the man thinks he's safe at last. He relaxes and starts to enjoy the leisurely cruise back across the ocean. The day they're due back in port he's walking on deck when he sees a small shape in the water trailing behind the boat. He can't make it out so he borrows a pair of binoculars from someone. He focuses the binoculars on the small shape and is horrified to discover that it's the white gorilla, swimming behind the boat. It must have been there all along.

The boat then arrives in port and the man hurries through customs and rushes to his car. He drives off just in time to see the gorilla climbing out of the ocean from his rear view mirror. He drives as fast as he can to his house and runs in locking the door behind him. All the time being followed be the huge white gorilla. The gorilla starts pounding on the door and having seen what it did to the cage at the zoo the man knows it won't take it very long to get in. He runs from room to room trying to think of a place he can hide. He hears the door shatter and dives into a wardrobe and pulls the door closed behind him. Outside the gorilla is going mad trying to find the man, he's ripping things up and tearing out doors. Finally he comes to the wardrobe the man is hiding in and rips the door off. The gorilla sees the man and smiles, reaches out a massive hand and gently touches the man and says... 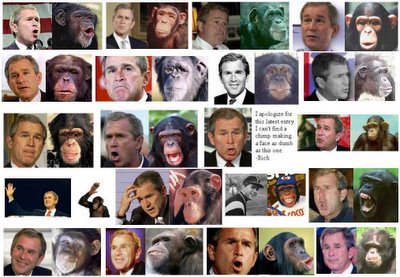 Misscellania definition
Primate: Removing your spouse from in front of the TV.

This entry was inspired by my bud April, called Ape for short.


Thought for today: We've all heard that a million monkeys banging on a million typewriters will eventually reproduce the entire works of Shakespeare. Now, thanks to the Internet, we know this is not true.

This post was originally published on November 2, 2005. There will be new material here tomorrow!

Thanks for stopping by the blog today. So I blogroll you if you blogroll me? If that works for you, it works for me. I like your blog, and I'll keep checking back in on you.

Orangutans are my favourite. I love their faces.. so full of expression.

Did you ever notice the enormous number of monkey references on the Simpsons?

Okay, I had to try the monkey test. Who says those apes are so smart, huh?!

Well, since they already posted the monkey's choice, where's the challenge? :D

Hey if you happen to get a chance to get the comic book BANANA SUNDAY, get it! It's hilarious!

Also, do you have a link to that video of a chimp putting its finger in his bunghole, takes a whiff, and falls from the tree? That's my all-time favorite! :)

Regardless of the content, I'm so impressed that can come up with all these links on such a regular basis!!

further evidence of evolution can be found daily on the New York subway system....