Once again, my favorite subject... men. I’ve been single for 20 months now. Thats a record in my adult lifetime. I don’t mean a record for being dateless (which it is), or a record for not having a significant other or boyfriend (which it is), I’m saying its a record length of time for me being unmarried. Not that I’m dying to get married again, but it would be nice to think I could still draw a date every now and then. Still, I would prefer Mr. Right to Mr. Right Now. That is, if I had a choice! There is such a shortage of unmarried men in my age group who are not addicts or incarcerated. Ladies, you know that. The guys know it, too, so they can hold out for a twenty-something Playboy bunny.. or more likely, they THINK they can! The upside of being a loser in the dating department is that it gives me a TON of blogfodder.

"I need someone real bad. Are you real bad?"

They talk about male display behavior in animals, where they show off what they’ve got. Human men do this, too, usually preceded by “Hey! Look at THIS!” (Thanks, Eva!)

There are lots of ways to see the beauty in even ugly guys.

'What is the best type of sex for you?' at QuizUniverse.com


A HAPPY ENDING (Thanks, April!) 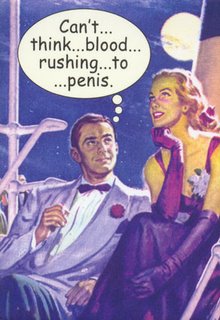 A man is dining in a fancy restaurant and there is a gorgeous redhead sitting at the next table. He has been checking her out since he sat down, but lacks the nerve to start a conversation.

Suddenly she sneezes, and her glass eye comes flying out of its socket towards the man.

He reflexively reaches out, grabs it out of the air, and hands it back.

"Oh my, I am so sorry," the woman says as she pops her eye back in place.

"Let me buy your dinner to make it up to you," she says.

They enjoy a wonderful dinner together, and afterwards they go to the theater followed by drinks. They talk, they laugh, she shares her deepest dreams and he shares his. She listens.
After paying for everything, she asks him if he would like to come to her place for a nightcap ... and stay for breakfast.

They have a wonderful, wonderful time.

The next morning, she cooks 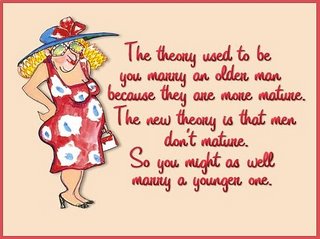 a gourmet meal with all the trimmings.

The guy is amazed!! Everything has been SO incredible!!!!

"You know," he said, "you are the perfect woman. Are you this nice to every guy you meet?"

"You just happened to catch my eye."


Personal Dumpster, a video made of photos from Yahoo Personals.


Mamacita suggested that I try Great Boyfriends, a site where you not only find av 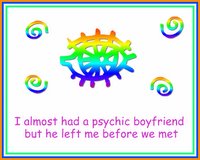 ailable guys, but also get recommendations from other women! I was kind of skeptical, since a lot of those guys are recommended by an ex. If he was so great, why didn't YOU stay with him? But some are recommended by a sister, or sister-in-law, or a co-worker who is forbidden to date him. That makes it a little easier to handle. I would LOVE to meet a guy just like my brother, who is perfect except that he procrastinates (you notice the new artwork on this site? Me neither). But I can't recommend him, he's happily married.

What Color Should Your Toenails Be? 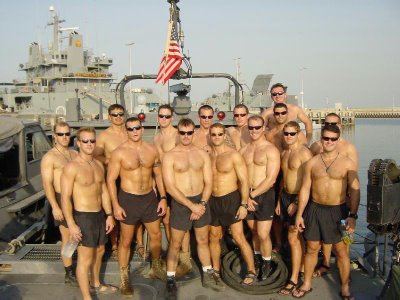 God Bless the US Navy!

If I were to design the perfect man, I would want one as experienced as Hoss, as talented as Driftglass, as smart as Carl, as charming as FTS, as fun as Prydwen, as handy as Nick, as serene as Ed, as cheerful as JB, as passionate as CC, as technosavvy as Kirby, as steadfast as Joel, as sexy as Rocky Jay, as funny as Hale McKay, as brave as Phil Jacobsen, as cute as Havril, with the faith of ER, who looks like Jacek. Thats not asking too much, is it? 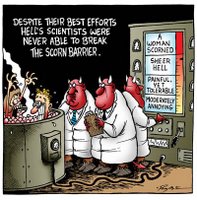 Thought for today: Needing someone is like needing a parachute. If he isn't there the first time you need him, chances are you won't be needing him again.

The first video was hilarious!!! See why women live longer?! What a hoot.

Thanks for starting out my day with the laughs. You rock.

Funny, RockyJay has a blog today on making Ms. Right.

A sampling of blogs like this shows us what a diverse bunch we bloggers are. Such different blogs from such different people.

Sometimes I do love the woman I've just met, sometimes I hated my wife and we had sex. How stupid is that question?

Oh! You're referring to the test! Yeah, I thought it was a bit innacurate myself, but hey, its a stupid little internet quiz. And I took it so long ago, I've forgotten the questions.

Steadfast! That's one of the sweetest things anybody's said to me in a long time! :) Thanks, Miss C!

You inspired me to do a post today on Mr. Right. Thanks

...and with a sense of humor (not to mention good looks) like ME!!!

Of course! (And modesty, too.)

Now this is the Perfect Post. I think we all need as much help as we can get in the Guy Department! Now if we can just look as sexy as a remote control...

Celia: I was single for five, count 'em five years after my marriage ended. The stories I could tell you...but I adore men, too...again, let me recommend, www.greatboyfriends.com. Hilarious post! Did you do the cartoons? I'd love to trackback using the google one later this week.

Everyone should go visits Ed's Tao of Love and see the collection of Mr. Right postings he's put together!

Mamacita, I didn't do the artwork. I have no time and no talent. Link away! I loved the poster the first time I saw it, but I don't remember where that was...

Karen and Saur, gee thanks guys, y'all are so sweet!

Well, I'll confess I can be superhornyspontaneous man...

it's all about looks isn't it, it's all about looks with you women, what about the mildly megalomaniacal, overly ambitious, slightly skitzoid, totally dorky, was in love but a girl broke my heart and dont care to bother with it any more, musically inclined, fashion concous, charismatic other part of me...

Yea. If ONE of those navy guys showed up at the door, the seat would be up, beer cans strewn about the place and there'd be burns in the leather couch. Mark my words....

Haha! You guys know shallow can go both ways... I'd say here, go ahead and do your own version of looking for Ms. Right, but Rocky Jay already beat you to it with a post post about the perfect woman.

Whew! That's quite a group to be included in ...Did I ever mention that I was in the Navy?

How did I let this slip without a comment.

This is an awesome blog. I found it when looking for free adult chat rooms single and liked very much.
Regards, Kate from Adult Singles

I am very curious about this issue. I found your blog when looking for picture personals articles and liked it very much.
Regards, Kate.