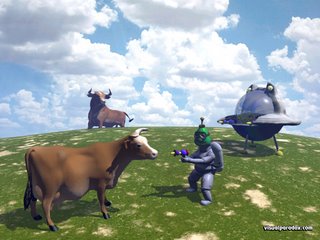 There has been a lot of talk in the news lately about an invasion of aliens. They come here without proper paperwork, and they take jobs away from Americans. Or is it that they do the work that Americas don’t want to do? So what is it, do they contribute more in taxes than they use, or are they really a drain on our society? And how does this reflect on legal aliens? And how did you aliens get permission to enter the US anyway?

I’ve done some research on aliens and how they manage to invade while we are busy paying attention to other things, like life, love, work, and blogging.

Here’s a visual to set the mood. Let it load, and scroll down.

How to spot aliens at work.

How to prevent alien and military abductions.

Google Earth followed some visitors to Area 51 on April 1st.

Lots of Area 51 information, from the journalist who first broke the story about the secret installation in 1989.

Lots of alien links and conspiracy theories at A TIMELORD I AM BEYOND BOUNDARIES. No, it doesn't make any sense to me, either.

How to fake a UFO photograph.

How to impersonate an illegal alien. 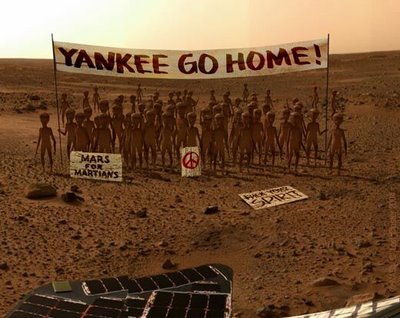 After all, how would THEY feel if we invaded THEIR planet?


DUBYA AND THE ALIENS

The President was awakened one night by an urgent call from the Pentagon.

"Oh, no," muttered the President, "Well, let me have the bad news first."

"The bad news, sir, is that we've been invaded by creatures from another planet."

"The good news, sir, is that they eat reporters & piss oil." 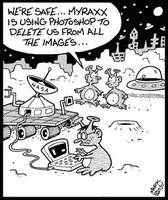 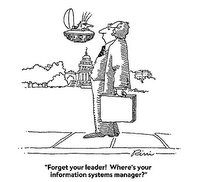 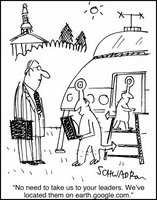 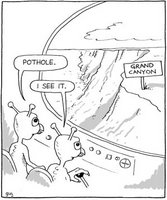 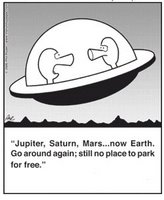 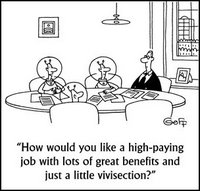 I’m not all that sure how to play Alien Tiles, but it sure is pretty!

The game is called From Space with Love. The mission is to abduct soldiers and turn them into hippies. W00t!

In the game Qwek Attack, you are trying to help the alien battle the evil humans.

How do they do that? Aliens effects in the movies are explained in this video.

Two aliens landed in the Arizona desert near an abandoned gas station. They approached one of the gas pumps, and one of the aliens addressed it.

"Greetings, Earthling. We come in peace. Take us to your leader."

The gas pumps of course, didn't respond. The alien repeated the greeting. Again there was no response. The alien, annoyed by what he perceived to be the gas pumps haughty attitude, drew his ray gun, and said impatiently, "Greetings earthling. We come in peace. How dare you ignore us in this way! Take us to your leader, or I'll fire!"

The other alien shouted to his comrade, "No, you don't want to make him mad!" But before he finished his warning, the first alien fired.

There was a huge explosion that blew both of them 200 meters into the desert, where they landed in a heap rather abruptly. When they finally regained consciousness, the one who fired turned to the other one and said, "What a ferocious creature. It damn near killed us! How did you know it was so dangerous?"

The other alien answered, "If there's one thing I've learned during my travels through the galaxy, when a guy has a penis he can wrap around himself twice and then stick it in his own ear, you don't mess with him." 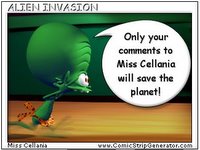 Thought for today: UFO's are like smart blondes; I keep hearing about them, but never see one.

Now, if the general had said, "They eat LAWYERS...", that would have been funny!

I am LOVING the Dubya joke- that's priceless!!! :)

I like the fuel pump joke, I can identify with it.