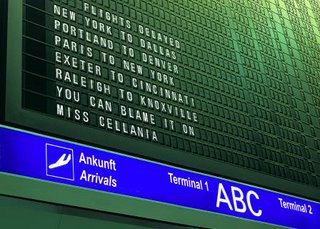 I’m not afraid of flying, I just don't much like it. It just seems like a monumental hassle, and not too comfortable either (at least in coach). You have to book tickets way ahead of time, and shop around a lot just to get a decent fare. Then you have to get there way too early, undergo weird security checks, and pay $6 for a lousy cup of coffee. They squeeze you into a space built for the size Americans were 35 years ago (on a plane thats at least that old). Once upon a time, you’d get a horrible meal served, with alcohol to make it seem better. Now, you are lucky to get peanuts and a soda pop. But I don’t drink the soda if its a short flight, because I’ve been on too many flights with inadequate water for the bathrooms. But I can handle it. After that one 16-hour nonstop in coach with a 300 pound companion, I can handle anything!

Read all about airline meals at Airline Meals.You can even look up what’s going to be served on your flight!

Watch an Airbus being built in about seven minutes. Awesome video.

Story of the Flight from Hell.

Collection of over 400 stewardess uniforms.

Airport is a cartoon of an airplane trip using infographics. This is clever! 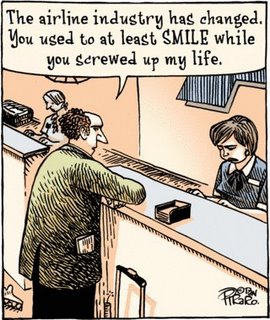 A veteran British Airways captain had just flown into Hamburg airport after its major overhaul in the 1970's. The new taxiway arrangements were a bit unfamiliar to him, as he carefully navigated his way to the terminal.

An officious, impatient traffic controller upbraided him over the radio: "I thought all British Airways pilots were expert on the world's airports."

After every flight, Qantas Australia pilots fill out a form, called a "gripesheet," which tells mechanics about problems with the aircraft. The mechanics correct the problems, document their repairs on the form, and then pilots review the gripe sheets before the next flight.

Never let it be said that ground crews lack a sense of humor. Here are some actual maintenance complaints submitted by Qantas' pilots (marked with a P) and the solutions recorded (marked with an S) by maintenance engineers. By the way Qantas is the only major airline that has never, ever, had an accident.

Miss C here. I have seen this going around referring to different airplines, even the Air Force, so I would take the Qantas part with a grain of sand. But its still funny! 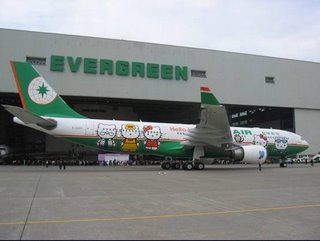 P: Noise coming from under instrument panel. Sounds like a midget pounding on something with a hammer.
S: Took hammer away from midget.

Hostile Skies is a WWII dogfight game. I don’t normally go for shoot-em-ups, but this was fun, easy to figure out and completely mouse-controlled.

All the information you could think of about airlines and more can be found at The Airchive. 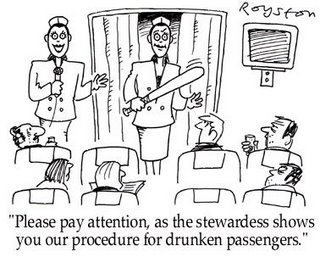 A DC-10 had come in a little hot and thus had an exceedingly long roll out after touching down. San Jose Tower noted: "American 751, make a hard right turn at the end of the runway, if you are able. If you are not able, take the Guadalupe exit off Highway 101, make a right at the lights and return to the airport."

A military pilot called for a priority landing because his single-engine jet fighter was running "a bit peaked." Air Traffic Control told the fighter pilot that he was number two, behind a B-52 that had one engine shut down. "Ah," the fighter pilot remarked, "The dreaded seven-engine approach."

Allegedly, a Pan Am 727 flight waiting for start clearance in Munich overheard the following: Lufthansa (in German): "Ground, what is our start clearance time?" Ground (in English): "If you want an answer you must speak in English." Lufthansa (in English): "I am a German, flying a German airplane, in Germany. Why must I speak English?" Unknown voice from another plane (in a beautiful British accent): "Because you lost the bloody war."

One day the pilot of a Cherokee 180 was told by the tower to hold short of the active runway while a DC-8 landed. The DC-8 landed, rolled out, turned around, and taxied back past the Cherokee. Some quick-witted comedian in the DC-8 crew got on the radio and said, "What a cute little plane. Did you make it all by yourself?" The Cherokee pilot, not about to let the insult go by, came back with a real zinger: "I made it out of DC-8 parts. Another landing like yours and I'll have enough parts for another one."

Thought for today: Two wrongs don't make a right, but two Wrights made an airplane.

Flying doesn't bother me much, even though I don't like heights, it's different in a plane. The main thing that puts me in a panic is closed in spaces. When I fly, I'm doped up on Xanax and Dramamine LOL

I saw a plane with the Hello Kitty on it and cracked up.

Dear Miss Cellania
You make me think there are some good humans in this world, and that there is hope for your species after all. (Cellania: is that a family name? It sounds Italian. Interesting.)

I can't compete with some of the controller radio traffic, but have a few anecdotes from my days as a travelling cog for a greedy, mean-spirited Fortune 500. Nowadays, I lean toward auto travel, even if it's slower. At least I get to leave when I'm ready, eat what I want during the trip, don't have to use casket-sized restrooms (depending on the rest stop facilities en route, of course), and don't have to suffer smart-ass comments from some controlling authority.

On the other hand, there's the time I was emptying my car of travel 'impediments', and inadvertently threw my keys into the trash with the handful of wrappers...pulling the lid, I was confronted with a previously-deposited dirty disposable diaper...where my keys chose to mock me from.

It was really good I didn't have to suffer any smart ass controllers over that 'un...

I almost forgot this one, which was an actual event enshrined in the old "Grampaw Pettibone" safety column in Naval Aviation News.

Pardon my memory on this, but here's the particulars.

A tower controller at NAS Pensacola heard the dreaded call of a pilot declaring falling oil pressure in one engine of his twin engined TS-2 Tracker.

The controller instantaneously gave the pilot a clear approach for an emergency landing and asked the pilot his position.

"I'm stopped at the taxiway near the runway," the pilot replied.

One of my favorite airline websites is seatguru.com. It helps you avoid the worst seats in the plane, when making your seat selections. I love it for it's sheer usefulness.

Oooh I hate fying... terrified of it.... phobic... I perfer to keep my paws on the ground but sometimes I have to fly...

Used to be you got to listen to a movie to now you have to pay for the headsets... See this help keep your mind off things...


Flying just keeps getting worse
I flew to Fl (13 hr flight from Munich) I went in may 05 got free headsets...
stayed 1 week and flew back on my way back the stewardess told me they havent been free for 2 years when I tried to tell her I just flew to Fl 1 week ago I was told to calm down by an on board airline security

same stewardess, when I boarded I told her I get motion sickness and have to drink plenty of water due to the pills I take...

She kept ignoring me and I didnt get water for 9 hrs... I arrived in Munich dehydrated and had to go to the dr

As a guy who used to spend a lot of time in the air... these are really SOMEWHAT REALISTIC, but at the same time SAD as you live through them. Funniest line I ever heard on a plane was while in First Class flying home late one Friday night from Chicago to Orange County, CA. One of the guys (who may have had too many bloody Mary's) said while standing up and directed toward the whole "First Class" cabin; "This DAMN flight has lasted longer than my first marriage!" ~ I have NEVER forgotten that line! ~ I've actually used that line on flights since. ~ jb///

I wouldn't have guessed that I'd find that Airbus assembly so interesting but it was!

I have never been a good flyer. It is the ups and downs that get to me the most. I always ask for an aisle seat and make sure I have a good book to read.

Your blog I found to be very interesting!
I just came across your blog and wanted to
drop you a note telling you how impressed I was with
the information you have posted here.
I have a automotive interior engineer vacancy
site.
Come and check it out if you get time :-)
Best regards!