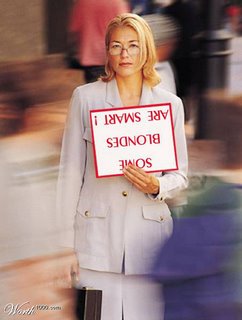 I don’t want to make fun of people, really. When I was a kid, there were all kinds of jokes that played on the assumption that a certain ethnic group was just plain dumb. Today, with joke services originating around the globe, I can name the “scapegoat” group used for jokes in dozens of countries. But I won’t. However, it seems to still be politically correct to make fun of dumb blondes. Maybe this is because just about all blondes are blonde on purpose. It not an accident of birth for which we are innocent parties like, say, being a Texan. We add the Clairol Chlorox in an effort to compete with the supermodels, ingenues, and porno queens who are held up as paragons of beauty. Meanwhile, the chemicals are leaching into our craniums and destroying cells at an amazing rate. Yeah, right. Y’all just go on thinking that, because it makes it easier for me to tell jokes about someone who is just plain dumb.

Three women escape from a penitentiary. A brunette, a redhead and a blonde. They run for miles and finally come to a barn, they decide to hide in some potato sacks. An hour later a sheriff and his deputy arrive at the barn. The sheriff tells his deputy to check the sacks. He kicks the first sack with the brunette in it. "Bow-wow!" says the brunette. "There's a puppy in this one!" says the deputy. So he kicks the second sack which the redhead in hiding in. "Meow!" says the redhead. "Sheriff there's a kitty in this one!" So he goes to the third sack with the blonde and kicks the sack. Nothing. So he kicks it a second time. The blonde replies, "Potatoes!" 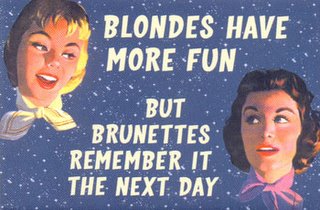 Two blondes living in Oklahoma were sitting on a bench talking........ and one blonde says to the other, “Which do you think is farther away ..........Florida or the moon?”

The other blonde turns and says “Helloooooooooo, can you see Florida...?????”

A woman was visiting her blonde friend who had acquired two new dogs, and asked her what their names were.

"Whoever heard of someone naming dogs like that?" said her friend.


How Blonde Are You?

A blonde pushes her BMW into a gas station. She tells the mechanic it died.

After he works on it for a few minutes, it is idling smoothly. She says, “What’s the story?”

He replies, “Just crap in the carburetor”

A police officer stops a blonde for speeding and asks her very nicely if he could see her license.

She replied in a huff, “I wish you guys would get your act together. Just yesterday you take away my license and then today you expect me to show it to you!” 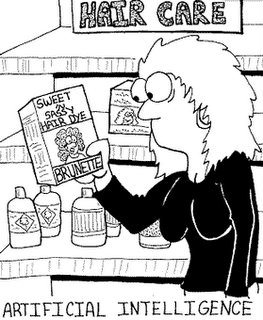 A blind man enters a bar. He finds his way to a bar stool and orders a drink. After sitting there for awhile, he yells to the bartender, "Hey, you want to hear a blonde joke?"

The bar immediately falls absolutely quiet. The guy next to him says, "Before you tell that joke, sir, I think it is just fair - given that you are blind - that you should know five things:

1 - The bartender is a blonde girl.

4 - The guy sitting next to me is a blonde Marine.

5 - The guy to your right is a blonde and is a professional wrestler.

Now think about it seriously, mister. Do you still wanna tell that joke?”

The blind man thinks for a second, shakes his head, and declares, "Nah, not if I'm gonna have to explain it five times." 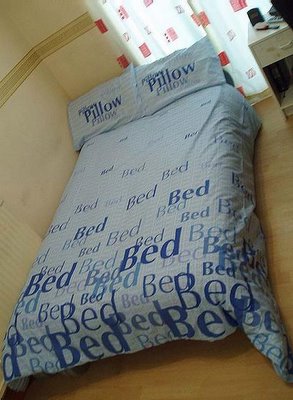 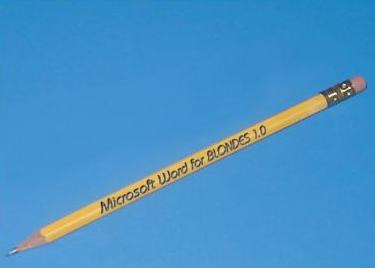 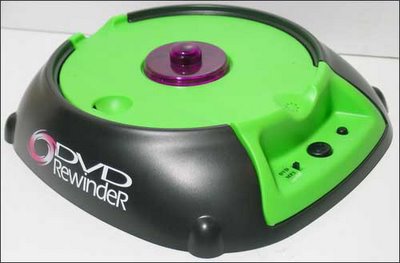 
A DVD rewinder! How thoughtful!

The best stuff is always at the bottom of the post. The best blonde joke ever.

Thought for roday: I'm not offended by all the dumb blonde jokes because I know I'm not dumb -- and I'm also not blonde. -Dolly Parton

There were three women, a Brunette, a Red Head, and a Blonde. They all worked together at an office.
Every day they noticed that their boss left work a little early. So one day they met together and decided that today when the boss left, they would all leave early too.

The boss left and so did they. The Brunette went home and straight to bed so could get an early start the next morning. The Red Head went home to get in a quick work out before her dinner date. The Blonde went home and walked into the bedroom. She opens the door slowly and saw her husband in bed with her boss, so she shut the door and left.

The next day, the Brunette and the Red Head are talking about going home early again. They ask the Blonde if she wants to leave early again.
"No," she says, "yesterday I nearly got caught!"

I chased "the best blonde joke ever" once before; never again.

I had heard the blind guy joke in a different way once before; it is, though, still very funny.

The joke about the blind man in the bar was one of the funniest I've ever heard.