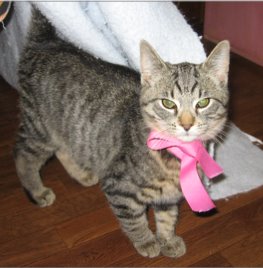 The big event at our house this week was the addition of a new family member! Yes, we have broken the Testosterone-Free Zone by taking in a stray tomcat Tuesday. Not really a stray; I’m pretty sure he was dumped here because at about 12 weeks, he’s just a tad old to easily find a home for. My daughter opened the front door to investigate all that meowing and he just strode right in, determined to stay.

Me: Its a little boy!
Daughter: How can you tell?
Me: Look! He’s got itty-bitty cajones!
Daughters: Ooooh!

This little tiger isn’t the least bit shy about telling you what he wants, either. “I want to be petted by you, and you, and then you, and then I want to stick my face in that soup you are eating. Then I’ll hiss at that big girl cat. Then you may pet me again.” So we are back to kitten mode, meaning I have to eat with one hand, while holding the kitten to the floor with my other hand or a foot, and keep the toilet lid down, and double up on the catbox duty.

My girls tried out a couple dozen names for him. They've pretty much settled on "Biscuit". And then they put a pink ribbon around his neck. The things a tomcat will put up with just to get some kibble and a kid to sleep with!

So here are some links for your enjoyment. I had twice this many, but trimmed way back so I wouldn’t take up so much of Hoss’ time.

Music video featuring lots of people dancing. They aren’t good at it. About as funny as you’d imagine! 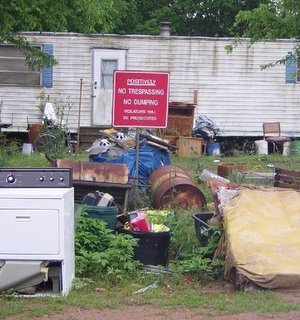 At Reincarnation Station, you can answer a few questions and find out whether you deserve to come back as a lower life form. My results said I would come back as a zebra. 23% of people scored higher. I believe those people lied.

That crazy woman from the Trading Spouses clip I posted last month? She has her own website.

Music video: Torn, performed in mime. I dare you to not laugh!

Blog of the week: Jerk Of All Trades looks at the Foreigner song Urgent. Make something funny out of the simplest idea. Thats what I like.

A cab driver reaches the Pearly Gates and announces his presence to St. Peter, who looks him up in his Big Book. Upon reading the entry for the cabbie, St. Peter invites him to pick up a silk robe and a golden staff and to proceed into Heaven.

A preacher is next in line behind the cabby and has been watchingthese proceedings with interest. He announces himself to St. Peter. Upon scanning the preacher’s entry in the Big Book, St. Peter furrows his brow and says, "Okay, we’ll let you in, but take that cloth robe and wooden staff."

The preacher is astonished and replies, "But I am a man of the cloth. You gave that cab driver a gold staff and a silk robe. Surely I rate higher than a cabbie."

St. Peter responded matter-of-factly:"This is heaven and, up here, we are interested in results. When you preached, people slept. When the cabbie drove his taxi, people prayed."

A man with three balls. This video is worth the load time just to hear The Beatles doing Golden Slumbers, and the juggling is impressive, too!

Determine your energy patterns through your name.

Imaginative photography. Outside of that, there is really no way to describe this.

The scientific approach to swimming in syrup.

Sam’s Mailbox Pictures is a large gallery of imaginative, artistic, and/or outrageous mailboxes. 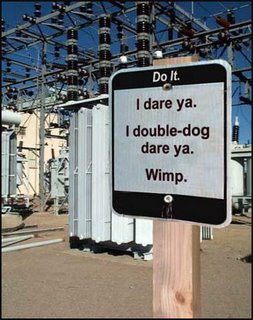 An Irishman named O'Malley went to his doctor after a long illness.

The doctor sighed and looked O'Malley in the eye and said, "I've some bad news for you. You have cancer, and it can't be cured. You'd best put your affairs in order.

O'Malley was shocked but being a solid character, he managed to compose himself and walk from the doctor's office into the waiting room, where his son was waiting.

After 3 or 4 pints the two were feeling a little less somber..There were some laughs and some more beers. They were eventually approached by some of O'Malley's friends, who were curious as to what the two were celebrating.

O'Malley told them they were drinking to his impending end. He told his friends, "I have been diagnosed with the AIDS."

The friends gave O'Malley their condolences, and they had a couple of more beers. After the friends left, O'Malley's son leaned over and whispered his confusion.

O'Malley said, "I don't want any of them sleeping with your Mother after I am gone."

YOU GOTTA LOVE THE IRISH!! 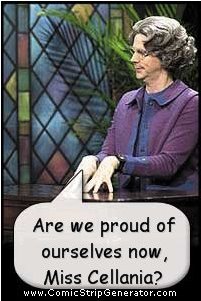 From the Day Late department: a cartoon entitled Size Matters.

For men who had a problem with Valentine’s Day and the obligation to shower your lover with useless tokens of affection, your payback is March 20th. However, if you didn’t DO the Valentine thing, you’re probably not going to celebrate in March, either.


Thought for today: All of your hard work and planning will come to nothing if you don't remember to wipe your prints off the tire iron.

He, ha, I love this place, great stuff, and I see that the Irish get a ribbing here too.

Thanks for visiting the Tree House, glad you enjoyed it. Was the coffe too strong BTW ? I couldn't find the scoop thingie this morning so I just dumped it in.

The kitty is adorable! Oh, and by the way, I'm coming back as a rhino. Great.

I made it to Giraffe back. And I did so want to make it to Dung Beetle.

Those links will still be there tomorrow, Hoss. And I have a almost-linkless post ready for Sunday!

Although you probably know by now, but I have put that comic strip generator to good work, especially in the post, "A Funny Thing Happened On The Way To My Blog."
...I love that site and samples will be appearing on blog from there for some time.
...Thanks for all the wonderful links. (and Thanks for your recent comment when you were able to get in)

That kitten in adorable!! I'll have to come back to visit some of your links... on my way to the airport for a work trip...

I wouldn't know how to describe the imaginative photos either... I wonder what the guy is on though LOL

Those photos are sure different from mine. I've never thought of doing anything like that!

Two cats is probably like fun, squared. I don't know how well Huggy would take to another cat in the house. With just me in the RV, one lap isn't big enough for two cats to snuggle on. Congratulations on your new family member.