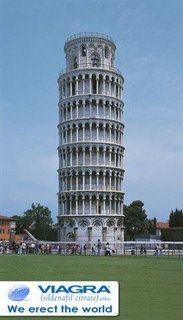 Just a minute... please check out the new toy at the top of the sidebar. Yeah, I changed the search engine. This one doesn't seem to be any more useful, but it sure is prettier! I'll give it a test run and maybe bring back the Rollyo later. Remember, if you haven't joined the Frappr group MC and Company, the invitation is still open!

Hoss said "Do you know it takes 3 hours to go through one of your posts? Why are you doing this to me?" Uh, sorry. But listen, just because you bought a new encyclopedia does not mean you have to read it all today! I promise a simpler post tomorrow. Also, welcome home to Wulfweard, who's been away from the blogosphere for a couple of weeks. His return is a load off my mind, since I was supposed to entertain the horde during his absence.

Tom Cruise on Oprah: As It Should Have Been. The magic of editing puts the world right.

This animation is another of those that I don’t understand at all; I just thought it was cool. I think it might be advertising.

Unusual Looking Buildings. This site is a LOT more interesting than the name would suggest!

The Faces of Meth. This is a heartbreaking site about what happens to the way you look after succumbing to methamphetamine addiction. After looking at those, you're going to need some eye candy to clear the brain.

Bioscapes is a international digital imaging competition. The gallery of winners is awesome!

What would you do? Take the Extreme Survivor Quiz.

The best thing I have read so far about how men can attract women.

So I took the Sexual Appeal test I saw over at Omegamom...

What is your sexual appeal?
brought to you by Quizilla 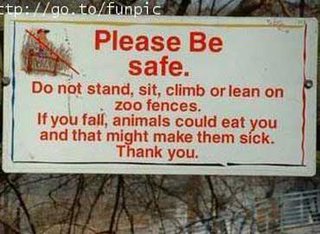 A golf pro dragged himself into the clubhouse looking as though he'd just escaped a tornado.

"I just lost a game to Houlihan," the pro said.

"What? But Houlihan's the worst player I've ever seen. How could he have beaten you?"

"What's a gotcha?" asked the woman.

"That's what I wanted to know," the pro said. "Houlihan said, 'You'll see.' Then, as I was teeing off, just as I had my club poised, he screamed out 'Gotcha!'"

"I can guess what happened," the woman said.

"Sure," the pro said. "The scream threw me off, and I missed the ball completely."

"Understandable," the woman said. "But still, that's only one swing. How did he win the game?"

The pro answered, "You try swinging at a golf ball all day while waiting for that second 'gotcha!'"

Write your name in Egyptian heiroglyphics!

Save the Bald Beaver!

Darla Shine’s Happy Housewives Club. I can’t join. I have a job. Come to think of it, I‘m not a wife, either. But I am happy!

Music Video: Bush and Blair at the Gay Bar.

When pigs fly: A photo essay. 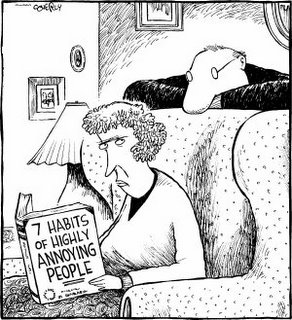 MONEY AND IGNORANCE
In case you've ever wondered why ignorance rises to the executive level, here is a simple explanation that is also mathematical proof:

1. Knowledge is Power.
2. Time is Money.
3. And, as every engineer knows: Power = Work / Time.
4. If Knowledge = Power, and Time = Money, then Knowledge = Work / Money.
5. Solving for Money, we get: Money = Work / Knowledge.
6. Thus, Money approaches infinity as Knowledge approaches zero, regardless of the Work done.
7. What this means is: The Less you Know, the More you Make.
(I KNEW someone would eventually prove this!)

Bad News: If you understand this, then you likely have a large knowledge base and therefore are subject to making less money. Damn shame.


Thought for today: There is no key to happiness. The door is always open.

P.S. Havril is counting down to his 1000th visitor. So go over and make his wait shorter. Thank you!

Wow! This is quite a blog, Miss Cellania!! Very impressive. Thanks for stopping by my place and commenting.

I always learn something new while visiting with you. Today I learned what a Johari’s Window is. I had never heard of that phrase before.

Thanks for the lack of a Johari's Window! Talk about ubiquitous!

(And that's NOT a dirty word.)

I've learned to never come here unless I have lots of free time on my hands. You have some really fun links!

Aw, thanks, Miss. You have more pull than Oprah. Let me know when you are counting down to, what, your bajillionth visitor, and I'll see what I can do to put you over the top. Now I'm going to have breakfast "thousandaire" style. Thanks again! Hav

John, I know what ubiquitous means. I are edumacated.

Finally! A day off to come read.

Congrats. on stopping smoking. I gave up two and a bit years ago, and it does get easier. I used Quitmeter (not sure of the URL) to tot up how much I saved etc.

Congrats on the two weeks, Missy. I am approaching one year sans butts. Hardly ever think of it anymore.

I'm Ingenue which says I'm young, sweet and maiive... but underneath all of that I am a sex kitten. People are dying to "deflower" me. Thanks Lolite.

haha ... thanks for the link ;) and that gay bar song is by a band called Electric Six - was sposed to see them but i got snowed in, in the suburbs. :(

miss cellania,
thank you for updating your blog every day as opposed to other crabby and pottymouthed people....if you get my drift.........kris

Wow, I truly saw one of the most riveting Crime Scene Investigation installments today. Let me
tell you, it had me on the edge of my seat. I'm talking about the original one that takes place
in Sin City, Las Vegas. Yeah, you know it! Yeah, so Grisham was on a scavenger hunt like I was
today for something like flirt attract women best advice ezine newsletter and wouldn't you know it, I finally found it.
flirt attract women best advice ezine newsletter