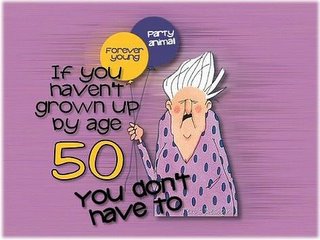 When I turned 30, and I’m not telling how recently that was, someone told me I was now middle-aged. Excuse me? The term “middle-age” implies the middle of your life, and I hope to survive past 60 if I don’t get hit by a bus. When you hit 40, the middle-age label is a bit easier to take, since you are now halfway to 80. What really changes is your perception of what middle-age means. I receive jokes and cartoons that refer to “middle-age”, illustrated with pictures of folks who appear to be “elderly”, meaning at least 80 years old. Really, look at the title illustration. Is that what 50 years old really looks like? I've seen several like that, and my reaction is: THAT couldn’t be someone MY age, with hair growing out of their ears, sagging body, wrinkles, and white hair! Then I look in the mirror and realize how much my eyesight has gone downhill. Maybe the people who construct these “funny forwards” are under thirty. Or they could be 80 and trying to convince themselves that they are still middle-aged. Who knows? But I’m willing to pass these along in case someone may get a laugh out of them.

Find facts about your favorite year in history.

Look up what songs were hot on this date in history.

Those who are middle-aged will enjoy this trip back to the disco days. The rest of you can laugh along with us. How did we ever dance in those shoes?

How your expectations change by middle age.

LOOKING BACK 30 YEARS (Thanks, Thersa!) 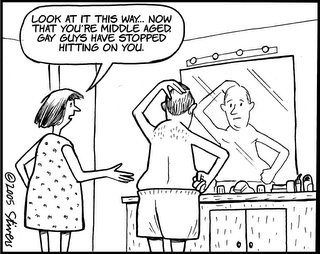 You Know You Have Reached Middle Age If...

1. You've come to the annoying realization that your parents were right about almost everything.

2. A gardener cuts your grass even though you have a brand-new lawn mower in the garage.

3. Now that you can afford front-row seat at a rock concert you can't imagine why anyone would want to be there.

4. Your baby pictures are in black and white.

5. Your prescriptions refill number is programmed into your "speed dial."

6. You have Christmas cards in the mail by December 1st.

8. You own more electrical appliances than there are outlets in your home.

9. You've named your eyeglasses by the activity they permit you to do.

10. Some of your mortgage payment actually goes against the principal.

12. You have more frequent-flier mileage than mileage on your car.

13. You vividly remember the day the price of gas went over one dollar a gallon.

15. You're looking for a new home with the master bedroom on the first floor.

16. The waitress at Denny's points out the "senior specials" in the big print on the back of the menu.

17. Your tattoos have folds. 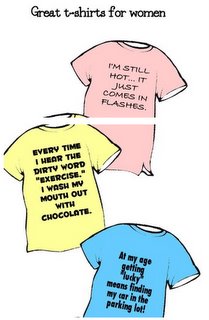 18. You have trouble falling asleep at night in a dark room and a comfortable bed, but can easily nod off any afternoon while driving seventy miles an hour on the freeway.

19. Your spouse and kids complain that you're "tuning them out," but a dog barking three blocks away keeps you up all night.

20. You dial the phone and then can't remember who you called.

22. You no longer have all of your original teeth, but you take comfort in the fact that you still have both of you original hips.

23. When you see a mother and her teenage daughter, you fantasize about the mother.

24. You remember having to get up and walk across the room to change channels on a television set.

25. Your computer has more memory than you do.

26. You'd stop and take time to smell the flowers, except you can no longer bend over that far without throwing out your back.

27. You're overjoyed to learn that sex uses up as many calories as jogging six miles.

28. You need a weed whacker to trim the hair growing from your nose, ears, and eyebrows.

30. You'd rather buy control-top panty hose than go to the gym.

31. You've received letters from cemeteries inviting you to purchase a burial plot and you've actually considered it.

33. When the flight attendant makes the preboarding announcement for folks that need a little extra time getting down the jetway, you consider it.

34. There's a tube of Ben-Gay in your medicine cabinet.

36. You have to unbutton your pants after a meal and take them off completely after a big meal.

38. You drive to an out-of-town pharmacy where nobody knows you to pick up your monthly prescription of Viagra.

39. The only illegal herbs you're interested in smuggling into this country are Cuban cigars.

40. There are parts of your body that you can no longer see without using multiple mirrors.

41. As a public service, you have agreed to never appear on the beach in a Speedo again.

42. You are secretly disappointed that we are still waiting for the advent of moving sidewalks, 3-D television, and flying cars.

43. The bag boy volunteers to help load groceries into your car in the "ten items or less" lane.

44. The group picture from your high school reunion could be the "before" picture for the Hair Club for Men.

45. You've mixed up the names of your children with the dog's.

46. One cabinet in the kitchen is devoted entirely to bottles of vitamins.

47. You use marijuana for medicinal reasons.

48. You've come to the realization that whoever said "You're not getting older, you're getting better" was not under oath.

49. You're ineligible to enlist in or be drafted into any branch of the armed services.

50. You'd like to live long enough to break even on your Social Security taxes. 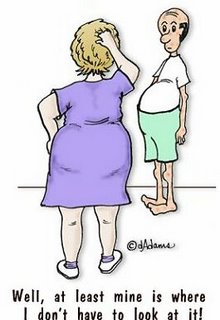 Rock Songs For Folks Over Forty
10. Let's Get A Physical
9. Ain't No Burrito Mild Enough
8. Johnny B. Olde
7. How Do You Mend a Broken Everything
6. The Lack O' Motion
5. Hair Potion Number Nine
4. Doctor My Eyes (And Ears and Joints and Back and...)
3. To All the Girls I've Disappointed Before
2. A Hard Day's Nap
1. Knock Knock Knockin' On The Bathroom Door

MissCellania definition
Adult: A person who has stopped growing at both ends and is now growing in the middle.

Thought for today: Age is just a number - and mine is unlisted.

Aughhhh and I was feeling so young and desirable when I woke up! LOL

What is your secret?

Ha! Now all I need is for my teenage daughter to tell me how hopelessly old and uncool I am.