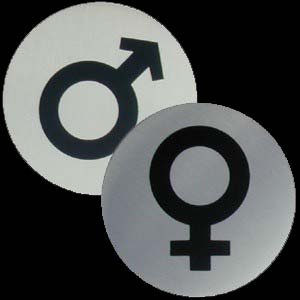 Another post in the never-ending series on the differences between men and women. Its an eternal research project.

Today is a continuance of yesterday’s topic, the drive to find a soulmate of the opposite sex (at least in most cases). We keep kissing frog after frog, knowing there’s a prince or princess out there somewhere. Along the way, so many things can go so wrong. The internet has made meeting each other so much weirder. Here’s a drasticly telescoped version of a weeks-long conversation I had with a man I “met” online last year.

He: I saw your picture, and I think you’re hot. I want to get to know the woman behind the blog.
Me: I don’t know, we have nothing in common, and you live 2000 miles away.
He: OK. Then lets have cybersex.

Should I dump him or not?

How to tell when a relationship is over.

Man: Where have you been all my life ?
Woman: Hiding from you.

Man: Haven't I seen you someplace before?
Woman: Yes, that's why I don't go there anymore. 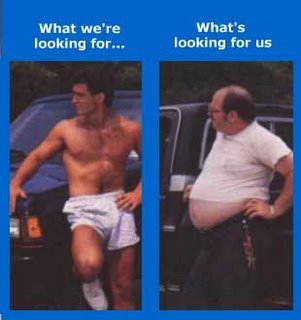 Man: Is this seat empty?
Woman: Yes, and this one will be if you sit down.

Man: Your place or mine?
Woman: Both. You go to yours, and I'll go to mine.

Man: So, what do you do for a living?
Woman: I'm a female impersonator.

Man: Hey baby, what's your sign?
Woman: Do not enter.

Man: How do you like your eggs in the morning?
Woman: Unfertilized.

Man: Your body is like a temple.
Woman: Sorry, there are no services today.

Man: I would go to the end of the world for you.
Woman: But would you stay there? 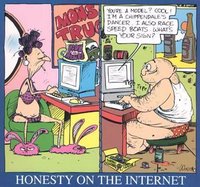 A VIEW FROM THE OTHER SIDE 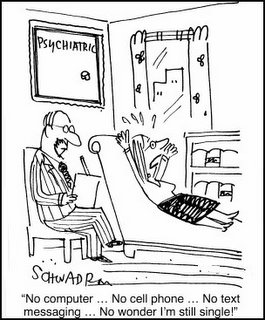 From AskMen.com: Why women give bad dating advice.

See also: In All the Wrong Places

Thought for today: If a man tells a woman she's beautiful, she'll overlook most of his other lies.

Do you know it takes 3 hours to go through one of your posts? Why are you doing this to me? Don't you love me anymore?

(I am 7'3" Eurasian male with high hopes of finding a high (6'9") woman with all her own teeth and oodles of cash. Looks not important, since you have so much money we can buy love elsewhere.)

I resent that, id totally traverse the earth for my current beau, tear down mountains and all that other wholesome goodness.