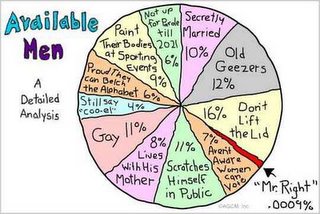 We’ve established by now that men and women are way different, although that shouldn’t have any bearing on our worth as humans or our rights as citizens. But different we are. And the drive to connect with the other is overwhelming (read into that what you wish). Along the lines, you can run into a million types of guys, or gals, and you just wish you could pick this quality from that one, and that quality from the other one and put them all together for the perfect mate. Kinda like a Stepford Wife. Maybe these links will help, or at least amuse you along the way. And for those of you who are married, count your blessings. Its a jungle out there!

Pathetic Personals. Too realistic by half.

How a man can win an argument with a woman. Wonderful article, and so true. Especially #4. A guy tried this with me ONCE and I was so surprised and happy, I cried. Then I married him.

Listen to the advice of an expert, 31-year-old Houston resident Gerald Doelpe.

Top 100 Cities with the Largest Percentage of Males. These towns are mostly military bases, with some prison towns represented. Check before you move!

Top 100 Cities with the Largest Percentage of Females. Not as high percentages as the men’s list, but there are still reasons. The town is either home to a women’s college, or else its a retirement village. Check the median ago to see which. 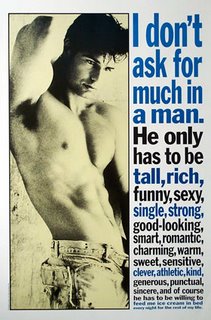 In short:
So complex, yet so predictable
So macho, yet so sensitive (usually to their own feelings)
So confusing, yet so funny
but most of all,
So irritating, yet so irresistible
...MEN! 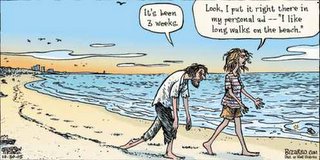 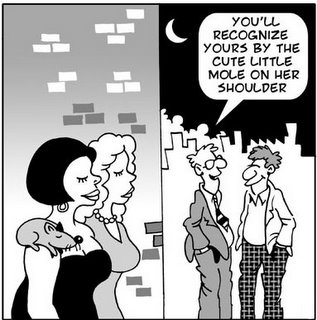 In short:
So simple, yet so complex
So weak, yet so powerful
So confusing, yet so desirable
So damning, yet so wonderful...
...WOMEN! 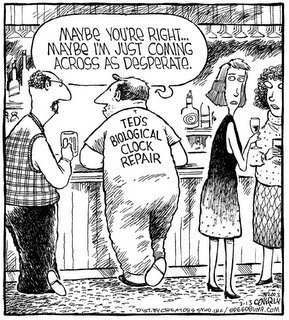 See also: In All the Wrong Places

One of the biggest fights Tom and i ever had was discussing the Mars and Venus book. Course that was early in our relationship.

Interesting that the first article listed after "How to Argue with a Woman" is this:

What's the next article in the series? "Six Ways to Enjoy The Couch On A Friday Night"?

I really like your blog, and will be back to have a better look when I have more time. Thanks for commenting on my blog. I've added you to my blogroll. Have a good weekend.

I found myself in SEVERAL places in your SPINNER Pie Chart above. But I ALWAYS lift the lid, I just NEVER close it! So I doubt I'd ever qualify as Mr. Right! Yet again... another FUNNY post. GO Ms. C.! ~ jb///

Thank you for popping by and visiting my blog and for leaving a comment. I adored the pie chart at the top of this post - it reminds me of the availability of men in South Africa - zilch!

FTS also prompted me to visit seeing as he highlighted you this week.

Yea, Penny, but women...can't live with them and you have to tip the ones you don't....

Chuckled all through the post and I love the final thought for the day. :-)

Was glad to your comment today. I may not leave comments here everey visit, but I am here everyday. Love your site for all the links. I have found a lot of stuff I have used on my site by way of your links.

Thanks for pointing out that article, Carl. Now I have six more code phrases I will always dread hearing.

you know, itd all be so much easier if we were all just ourselves with the people we dated, instead of trying to act any specific way. :)