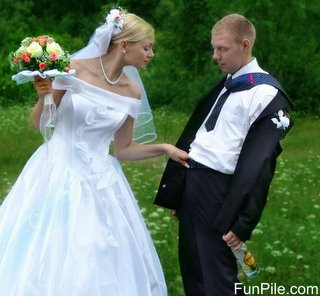 The beginning of a marriage deserves some pomp and celebration, at least the first time around. How we ever got into a tradition of going bankrupt to pay for this ceremony and celebration is beyond me. But as long as people keep having weddings (and videotaping them), we will find some reason to laugh at them.

BTW, to those who came here from The Naked Ovary looking for a sad and sordid story... there is one, but you won't find it on this site, ever.

Too many couples marry for better, or for worse, but not for good.

When a man marries a woman, they become one; but the trouble starts when they try to decide which one.

When a man opens the door of his car for his wife, you can be sure of one thing: either the car is new or the wife is.


MOTHER OF THE BRIDE 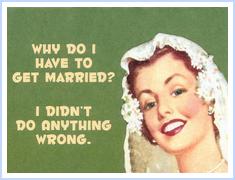 Jennifer's wedding day was fast approaching. Nothing could dampen her excitement -- not even her parents' nasty divorce. Her mother had found the PERFECT dress to wear and would be the best dressed mother-of-the-bride ever!

A week later, Jennifer was horrified to learn that her father's new youngwife had bought the exact same dress! Jennifer asked her to exchange it, but she refused. "Absolutely not. I look like a million bucks in this dress, and I'm wearing it," she replied.

Jennifer told her mother who graciously said, "Never mind sweetheart. I'll get another dress. After all, it's your special day." A few days later, they went shopping and did find another gorgeous dress.

When they stopped for lunch, Jennifer asked her mother, "Aren't you going to return the other dress? You really don't have another occasion where you could wear it."

Her mother just smiled and replied, "Of course I do, dear. I'm wearing it to the rehearsal dinner the night before the wedding!" 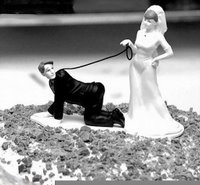 A little secret comes out at the wedding.

Video of lots of people fainting at weddings.

There would be less "Oh Promise Me" and "Endless Love," and more "Louie, Louie" and "Mony Mony".

There would be a "Rehearsal Dinner Kegger" Party.

Bridesmaids would wear matching blue jean cut-offs and halter tops. They would have NO tan lines and more skin showing than not.

June Weddings would be scheduled around basketball play-offs. 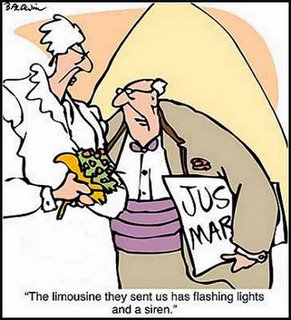 Vows would mention cooking and sex specifically but omit that "forsaking all others" part.

The couple would leave the ceremony in a souped up '73 Charger or some other Mopar with racing tires and flame designs on the side of the car. Better yet, a Harley!

Idiots that tried to dance with the Bride (unless they were really old) would get punched in the head.

Big slobbery dogs would be eligible for the role of "Best Man".

There would be "Tailgate Receptions".

Outdoor weddings would be held during sporting events at half-time or between innings.

Ceremonies would be short and Honeymoons would be long.

Ceremonies and Honeymoons would be inexpensive compared to the cost of the Bachelor Party. Those strippers and liquor sure do add up.

Men wouldn't ask...."Well, what do you think, Dear, The Burgundy or the Wine colored napkins?" They'd just grab extras from their local pub or tavern.

Favors would be matchbooks and cigars. Better yet, free drink passes at the local lounge.

The brides dress would show cleavage, her navel and be form fitted to her ass.

Instead of a sit down dinner or a buffet, there would be a hog roast or buckets of chicken, pizza and plenty of bar-b-que.

No one would bother with that "Veil Routine". But they would insist the garter be as high up on her leg as it would go. 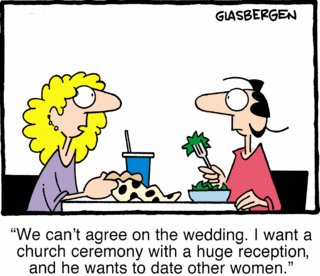 The bridal bouquet could be recycled from a previous funeral or something.

This is where I put a special shout out to Laura and Mark in Denver, wishing you all the happiness in the world as you approach your wedding date!

Thought for today: It was an emotional wedding. Even the cake was in tiers.

My son and his fiancé are getting married this October. Right now we are living and breathing wedding plans. Your post was a breath of fresh air.

Ms. C. - Once again you've cracked me up! Too many excellent ones here to COVER but Jennifer's Mom's dress takes the CAKE! ~ jb///

Personally, I prefer to celebrate the divorce...Hooters waitress by my side, cabana boy by the ball-and-chain's side, a minister to tell us to go to hell...and then you get as drunk as you did on your wedding night, only everyone's cool with it because, you know, you're not trying to have kids...

There is GREAT merit in recycling funeral flowers.

Hey, you have a great blog here! I'm definitely going to bookmark you!

I have a muscle cars site/blog. It pretty much covers ##KEYWORD## related stuff.

Come and check it out if you get time :-)

Hi, I found your site while looking for wedding apparel, wedding dresses and flower girl dresses. Even though you didn't have exactly what I was looking for I did get some nice ideas. Check out my link here if you need any wedding info/ideas for your use. You'd be surprised how cheap some of these items really are. I sure was!