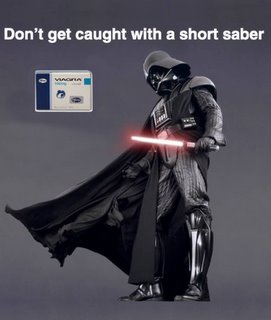 My younger daughter has expanded her movie repertoire to include the Indiana Jones series and the Jurassic Park series, but she still lives and breathes Star Wars. Getting all the action figures, posters, books, and that Darth Vader helmet for Christmas didn’t help. When I tucked her in last night, I noticed a piece of paper she had taped up inside her bunk.

She also has pictures she’s drawn of the various characters, especially Darth. They are on a first-name basis now. Meanwhile, I keep collecting links and stuff.

To set the mood: The Imperial March by Areosith.

9. You won't sleep with your wife unless she says, "Help me, Obi Wan, you're my only hope"

8. You spent $10,000 trying to Rogaine yourself into Chewbacca

7. You're continually stunned when the President makes major decisions without consulting Mark Hamill.

6. Your favorite pickup line: "Would you like to handle my light saber?"

5. You keep referring to your lawn mower as "that crazy droid"

4. You spend most of your days trying to use "the Force" to open a can of pears

3. You once saw an eggplant that looked kind of like Darth Vader and almost had a heart attack

2. Your sex life is strictly "Han Solo," if you know what I mean

1. You like Yoda so much, you voted for Ross Perot


Take a look at these pixilated Star Wars mini-movies, Episode 4 and Episode 5.

Darth Vader immortalized as a gargoyle on the Washington Cathedral.

Play 20 questions with Darth Vader. Be careful what you are thinking of, he may be able to read your mind! Ha! I stumped him!

Right here is the geekiest thing I’ve ever seen. I don’t understand any of it.

Innocuous-looking on the outside, this house contains an amazing collection of Star Wars memorabilia that you have to see!

How the Death Star works. Some people take movies WAY too seriously.

Darth Vader’s blog. Hasn’t been updated in a while, but its got some cool links! 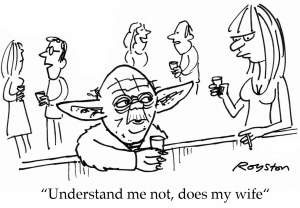 10. "What could possibly have come over Master Luke?" 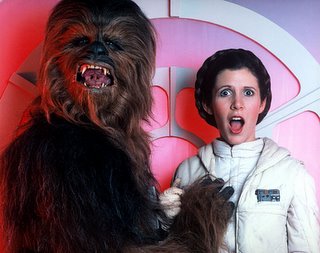 
Previously on Miss Cellania:
Take a Walk on the Dark Side for way more funnier links.
Dath Vatter was a post by a guest blogger, my kid.

Thought for today: Since light travels faster than sound, people appear bright until you hear them speak.

Someboday spent a lot of time coming up with those lines, didn't they. I've never been much on Star Wars. I'm more of a Trekker. ;)

I'm already working on that one.

you know i dont get any of that geekiest stuff ever thing either, though i did like the movies as a kid...

I am happy to be able to brush up on selector's specificity. I learned all that stuff in grade school but had forgotten most of it.