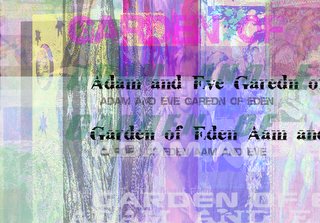 What a wonderful story, full of symbolism (apple, snake, fig leaves), the struggle of good vs. evil, a beautiful garden for a setting, and nudity! What else could you ask for? With this as a first story, the Bible just grabs you and sucks you right in. A guaranteed best seller. And when you start peeling the layers back (like Shrek), you find more layers of meaning.

Tish published an Interview with Adam, part one and part two.

Hoss on the Garden of Eden.

Many different theories of Creation.

Belief-O-Matic -- A personality quiz about your religious and spiritual beliefs.

One day, after a near eternity in the Garden of Eden, Adam calls out to
God, 'Lord, I have a problem.'

'Lord, I know you created me and have provided for me and surrounded me with this beautiful garden and all of these wonderful animals, but I'm just not happy'

'Why is that, Adam?', comes the reply from the heavens.

'Lord, I know you created this place for me, with all this lovely food and
all of the beautiful animals, but I am lonely.'

'Well Adam, in that case I have the perfect solution. I shall create a
'woman' for you.'

'This 'woman' will be the most intelligent, sensitive, caring, and
beautiful creature I have ever created. She will be so intelligent that she
can figure out what you want before you want it. She will be so sensitive
and caring that she will know your every mood and how to make you happy.

Her beauty will rival that of the heavens and earth. She will unquestioningly care for your every need and desire. She will be the perfect companion for you.', replies the heavenly voice.

'She will be, but this is going to cost you, Adam.'

'How much will this 'woman' cost me Lord?', Adam replies.

'She'll cost you your right arm, your right leg, an eye, an ear, and your
left testicle.'

Adam ponders this for some time, with a look of deep thought and concern on his face. Finally Adam says to God, 'Ehhh, what can I get for a rib?'

The rest, as they say, is history. 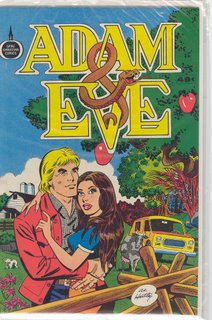 Eve chats with God. "Lord, I have a problem."

"I know that you created me and provided this beautiful garden and all of these wonderful animals, as well as that hilarious comedic snake, but I'm just not happy."

"Well, Eve, in that case, I have a solution. I shall create a man for you."

"A flawed creature, with many bad traits. He'll lie, cheat and be vain; all in all, he'll give you a hard time. But he'll be bigger, faster and will like to hunt and kill things. I'll create him in such a way that he will satisfy your physical needs. He will be witless and will revel in childish things like fighting and hitting a ball about. He won't be as smart as you, so he will also need your advice to think properly."

"Well ...you can have him on one condition."

"As I said he'll be proud, arrogant and self-admiring.....so you'll have to let him believe that I made him first. And it will have to be our little secret........ you know, woman to woman."

Whenever your children are out of control, you can take comfort from the thought that even God's omnipotence did not extend to His own children.

After creating heaven and earth, God created Adam and Eve.
And the first thing he said was, "DON'T!"

"Because I am your Father and I said so! " God replied, wondering why He hadn't stopped creation after making the elephants.

A few minutes later, God saw His children having an apple break and He was ticked!

"Then why did you? " said the Father.

Having had it with the two of them, God's punishment was that Adam and Eve should have children of their own.

Thus the pattern was set and it has never changed.

BUT THERE IS REASSURANCE IN THE STORY! 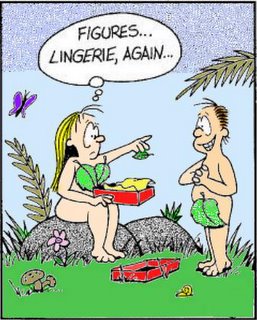 If you have persistently and lovingly tried to give children wisdom and they haven't taken it, don't be hard on yourself.

If God had trouble raising children, what makes you think it would be a piece of cake for you?

Those were so funny and the comics are great. Thanks for the giggles.

The "Creation of Woman" gave me my morning smile. The "Alternate Version" had me chuckling out loud.

bah, it was the flying spaghetti monster that created the universe and everythhing else in it, http://www.venganza.org/ - seriously check it out, stuffs hillarious

Congratulations for your success on the smoking front. That is quite an accomplishment, and something to feel really proud of.

What is this "God" thing? I thought there were lots of them: God, Lord, Yaweh, Thor, Zeus, Mohammad of the Turban Bomb Temple, Mrs. God, goddamit, and so on.

Thanks for the laugh.