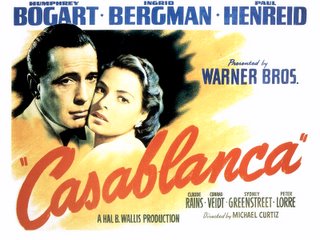 I love movies, especially old classic movies. Anytime I must name one favorite, Casablanca is the easy answer. Released in 1942, it won three Academy Awards, including Best Picture. Casablanca is an old-fashioned epic, spanning genres the way a big film is supposed to. Yes, its a chick flick, because it contains an honest-to-goodness tear-jerking love story. Its also an action film, pitting Nazis against freedom fighters, corrupt cops against the little guy, and the forces of World War II against our sense of justice. There are some wonderful political lessons here. I still get a lump in my throat when I hear the bar version of La Marseillaise. Its the classic struggle between honor, duty, and emotion. And there are some really funny characters and lines. The acting is wonderful, the setting is exotic, the tension is real. What else could you ask for? OK, maybe a 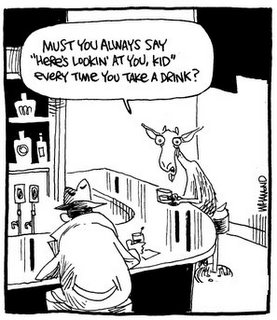 joke or two, so I’ll give you those.


For movie buffs, here is a ton of Casblanca info.

A (somewhat) Yiddish parody of “As Time Goes By” entitled “A Bris is Still a Bris”.

Play It Again chess game, recreating the match between Bogie and Peter Lorre in the movie. Supposedly the toughest chess game on the internet.

Not just my opinion: What Makes Casablanca great.

So I took a quiz to see which Casablanca character I resemble. This one was pretty much movie-oriented.

You are Ilsa Lund Laszlo. You are beautiful and
brave but not good with firearms. You look
good in big hats and have a thing for tough
American barkeeps. Too bad you married a
European dude.

Which character in Casablanca are you?
brought to you by Quizilla

****************
OK, then I took a completely different quiz and got the same result. This quiz has more to do with your political opinions.

You are Ilsa Lund. "Is that cannon fire, or
is that my heart pounding?"

Which Casablanca character are you?
brought to you by Quizilla

The Top 9 Rejected Lines in Casablanca

9> "If that plane leaves the ground and you're not with him, you'll regret it. Maybe not today. Maybe not tomorrow. But certainly once the Paxil wears off." 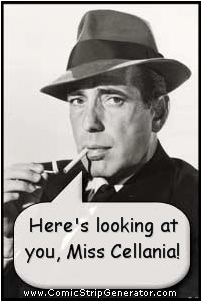 eating a hill of beans in this crazy world."

and the Number 1 Rejected Line in "Casablanca"...

1> "Louis, I think this is the beginning of a codependent relationship with poorly defined boundaries."


Thought for today: It doesn't take much to see that the problems of three little people don't amount to a hill of beans in this crazy world.