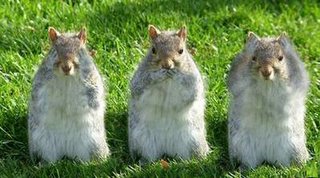 Why a post about squirrels? Because they are funny. Because people manipulate them to make them more funny. Because they remind me of their presence every day as they run across my porch, vainly searching for the dog food that used to be there when I had a dog. The firewood isn't stacked all that neatly; they probably have a few nests in there. Because I just managed to have a lot of squirrely material. Please enjoy some of it!

Squirrels are trying to take over the world!

The story of the EVIL MUTANT ATTACK SQUIRREL OF DEATH!

Squirrels have been training for covert military operations.

Squirrel vs. cat. All this over nuts the cat won’t eat anyway. Or is it bait? 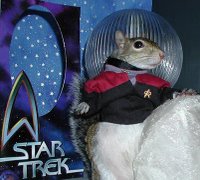 Finnegan was a baby squirrel adopted by a mother dog. (Thanks, Kip!)

Twiggy, the water-skiing squirrel. There is a video at this site.

Mr. & Mrs. Jean and Barbara Gosselin Orwigsburg, PA. took in an orphaned gray squirrel. No one cared that they had this squirrel, until Game Officer William Dingman cited them for possessing illegal wildlife. Nutkin the squirrel was taken from them. Two years later, after many court battles, Nutkin was returned to her family. Read all about it at Operation Bring Nutkin Home.

Squirrels identify each other by scent.

Video of a squirrel repellant in action. Some people get their kicks in odd ways. I bet they also watch the bug zapper.

You can buy a Bring-to-life Squirrel Kit.. containing a dead squirrel and some Red Bull. Its not selling all that well. 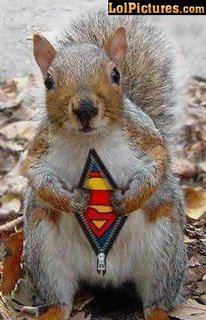 A pastor was giving the children's message during church. For this part of the service, he would gather all the children around him and give a brief lesson before dismissing them for children's church.

On this particular Sunday, he was using squirrels for an object lesson on industry and preparation. He started out by saying, "I'm going to describe something, and I want you to raise your hand when you know what it is." The children nodded eagerly.

"This thing lives in trees (pause) and eats nuts (pause)..." No hands went up. "And it is gray (pause) and has a long bushy tail (pause)..." The children were looking at each other, but still no hands raised. "And it jumps from branch to branch (pause) and chatters and flips its tail when it's excited (pause)..."

Finally one little boy tentatively raised his hand. The pastor breathed a sigh of relief and called on him. "Well, "said the boy, "I know the answer must be Jesus... but it sure sounds like a squirrel to me!"

A father and son went hunting together for the first time.

The father said, "Stay here and be very QUIET. I'll be across the field." A few minutes later, the father heard a blood curdling scre 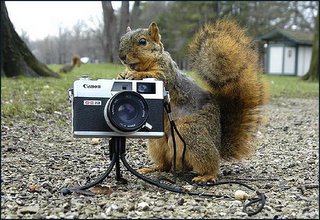 am and ran back to his son.

You Are A: Squirrel!

Squirrels are quick and cheerful animals who spend their time scurrying, scavenging, and playing. As a squirrel, you are often seen jumping happily from branch to branch up in the treetops. Squirrels are foragers searching for nuts and seeds, and they are social animals often seen chasing and playing with other squirrels.

You were almost a: Pony or a Monkey
You are least like a: Turtle or a GroundhogDiscover What Cute Animal You Are!
RERUN JOKE

Squirrels had overrun three churches in town.
After much prayer, the elders of the first church determined that the animals were predestined to be there. Who were they to interfere with God's will? they reasoned. Soon, the squirrels multiplied.

The elders of the second church, deciding that they could not harm any of God's creatures, they humanely trapped the squirrels and set them free outside of town. Three days later, the squirrels were back.

It was only the third church that succeeded in keeping the pests away. The elders baptized the squirrels and registered them as members of the church. Now they only see them on Christmas and Easter.
(Thanks, April!) 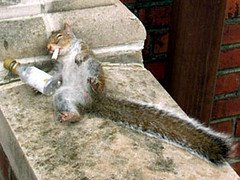 It doesn't take a lot of imagination to find a dead squirrel and pose it with a bottle, but I'll put them here because its expected. 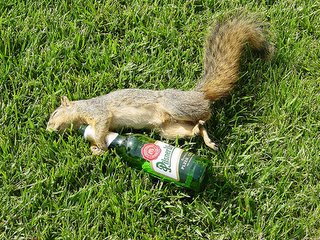 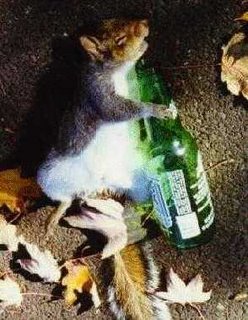 Thought for today: How do you expect me to do something original if you won't tell me what?

As part of my community serv...errrr, commitment to the planet, I run a service rehabilitating squirrels who have had a rough go of it, and have fallen into drink and despair and cashew addiction from too-friendly humans. I am the founder of ACORN (Ass'n for the Care Of Rodent Nutadddicts), and Bucky (the first squirrel you have pictured here) is one of my star projects.

You'll be pleased to know that as of last summer, Bucky was leading a healthy and productive life, gathering nuts and harassing girl squirrels...

I keep insisting, Missy: You're nuts.

(Thanks for all the amusing links. You're a master.)

This is about THE SQUIRRELIST one you've ever done. (albeit still FUNNY!) ~ jb///

One: a friend who i've known for ages wrote a short story about squirrels in elementary school creative writing class, it was so f'ing stupid we still make fun of him about it. Not that I had a better one, i think it was about bill and flark who traveled the glalaxy on a maxi-pad. Dont ask.

Two: In Northern Europe we have red squirrels

They are such entertaining little rodents. A friend told me a story of one that outsmarted them, which became a post. I just wish I could have seen it.

I was searching blogs,and I found yours.Please,
accept my congratulations for your excellent work!
If you have a moment, please visit my tritronics electronic dog collars site.
Have a good day!