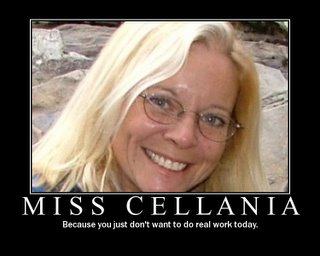 Several people have commented that I put a lot of work into these high-link posts. Au contraire, its not as difficult as you think! I don't think up a topic, and then look for links. I just collect links and jokes I like and categorize them as well as I can. I have a few dozen topic files open at any given time. If I find something worth saving that doesn't fit, I just start a new file. When a file has enough, I post it. Its that simple. The topics pick themselves.

Every once in a while, I will go out of my way to find something for a particular post, like the original "agony of defeat" video. A post on slipping and sliding in the Winter Olympics just would not be complete without it. That effort paid off bigtime.

But mostly, research for Miss Cellania is fun. Its just surfing. Its what I did before I had a blog. Here's some of the neat stuff I've found lately.

FUN WITH THE NEWS 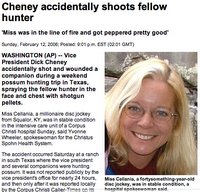 Dick Cheney shooting a hunting partner is one of those stories which will go down in history. Too much karma going on there to even think about. It didn’t even take much imagination to see the cartoons in your head, hours before they hit the net and the papers. Some of my friends received this news item in their inboxes. There’s a perfectly rational explanation; I used Charles Vestal’s story generator, which I found on Boingboing. The Boingboing article has the priceless Ten Ways Dick Cheney Can Kill You graphic from a year ago.

You may also want to play the Dick Cheney’s Quail Hunt Game.

I still can’t load Google blogs 99% of the time. But now I have Bloglines! I always HAD Bloglines, but the blog I used to test it only posted a summary of posts, which led me to believe it wouldn’t work for me. NOW I have lots of feeds coming my way. So Mike, Hoss, Lori, Kate, Johnny, ER, Carl, CC, Julie, Erinberry, Ivy, and the rest, I can read your posts! I still cannot see your pictures, leave a comment, or use your blogroll. But its progress. 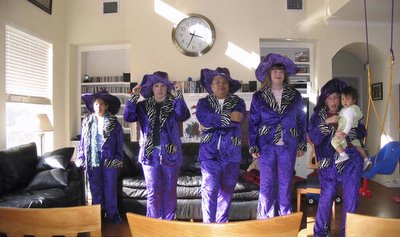 Johnny posted about some Texas tidbits he toasted. Jalapenos and cream cheese. It sounds innocuous enough (not to mention delicious), but this dish apparently causes people to dress up in purple velour and pose for embarassing pictures. He says it wasn't the food, it was his amazing leadership skills. I have a suspicion it may have been the liquid refreshments.

PS Johnny says the "Ni Hao, Y'all" t-shirts are all gone. Just as well, I would prefer mine without mention of Texas. I may have to get my own printed up. Is it true that Cafe Press shirts are as thin as tissue paper? 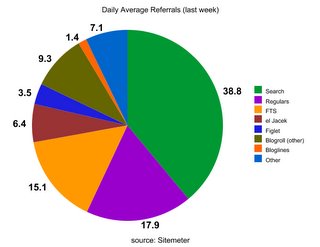 When I found the Create A Graph program, I HAD to go find some data to make a graph with. Graphs are just plain FUN! C00l geeky fun with pie charts and bright colors! The sitemeter was an easy place to start. I had no idea how my eyes would glaze over seeing search after search looking for the Wide World of Sports intro featuring ski jumper Vinko Bogataj wiping out week after week. I knew there was some reason I went to so much trouble to find that rare video. My theory was correct, we watch the Winter Games to 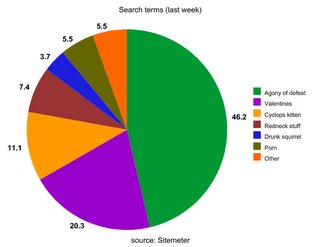 see people fall. But the elite athletes on TV aren't falling enough to suit us!

These graphs say "average" and "last week", but just between you and me, I only took data from two days. I mean really, this ain't something I'm being paid to do.

I had never heard of Frappr, til last weekend when I came across two of them within an hour (things that makes you go “Hmmm”). You know me, I had to go for that real quick. Here’s the link to my little map, please plant yourself somewhere in there, with a picture if possible. I will eventually have this in the sidebar, if I can figure out the best way to make it work.

The odd thing about my map is that you can't see my point on it. Thats because caveyak came along and plopped right down in my zip code! He's entitled, because its his zipcode, too. If you zoom in on our hometown, you'll find that we do, in fact, live several blocks apart. 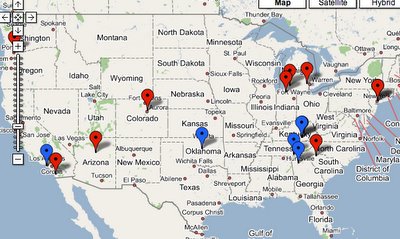 MAYBE NOT SO FUN

Today is the tenth day of not smoking. It seems the worst is over, but the battle is not yet won. The hallucinations and the nosebleeds have subsided. Can anyone tell me how long I'll have this metallic taste in my mouth? I quit using the patches because they didn't seem to make any difference. Fifty dollars a box, and I haven't used half of them! Oh well, they'll be there if I need them. I've gotten a lot of advice from ex-smokers, which I thoroughly appreciate. H

alf of them say they never looked back; the other half say they still crave a cigarette every day ten, twenty years later. After pondering this, I realized that those who struggle with it years later are all female. Those who say its simple are all male. Another chemical difference thats just plain unfair. But expecting life to be fair will only make you crazy, so I'll just be glad I'm strong enough to handle it.

Thought for today: Blessed are the flexible for they shall not be bent out of shape.

Missy: One of the jokes I stole from you is up today. I will be back later to put Hoss on your map.

Cellania thanks - i artsy fartsied one of my husbands pics - the wisteria from down at his folks house - you are the only person that identified what the blooms actually were! :)

heres the fatty, i mean skinny on not smoking. i quit jan 3rd, and fot the 1st 2 weeks really wanted a f'in cig. then it subsided, i took a puff a while ago and it tasted like shit, and thats when I knew I had really quit. Why did I quit, not because of health reasons, or beacuse they cost too damn much (7.50 a box here) but because I just got sick of smoking, it became a chore to go outside, stand in a cold ass hallway and inhale them down. i didnt like waking up with dry mouth etc... and btw, things taste so much better now, i smell all these wonderful things, and the money i save. oh my.... as for themetallic taste, brush, drink lots of tea (sans sugar) I found chamomile to be great as it keeps the nerves cool.

And stay off the patches, theyre retarded, you want to end your dependancy on nicotine, not adjust it.

Cheers, and keep on truckin

Good luck on the not smoking thing! Hubby and my two boys (ok, 20 something young men) smoke and I witness what they go through in trying to quit.

Makes me glad I never started, but I sure have empathy for those who are trying to give it up.

Funny Blog! Keep up the good work! smiles and giggles are the best way to start the day!

That's too funny... love all the pictures. Just popping over from FTS to say howdy.

Thank you for your comment on my blog. I am finding, as you said, that time helps ease the pain but I will never "get over" the loss. I think for me the strangest thing is that my world turned upside down on July 23rd but for the rest of the world everything continued on normally. That poem I found & posted really helped, especially on Valentines Day.

By the way, quitting smoking does work. I have absolutly no urge for them, after 37 years and a month. And, the name of your blog is brilliant! It will take me a long time to really work my way through it.

I use bloglines too... it's simple. I also have all my links in folders and such.... I see you're a neighbor in KY! Hello... I'm just across the stateline. :)