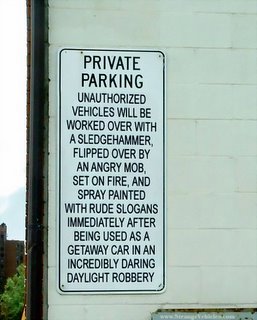 Hey! Ya wanna go parking? I know a great spot-right here! If you were ever teased about your inability to parralel park, I've got some examples to make you feel better about it. If you've ever parked as badly as these folks, you could end up on the internet!

About the other kind of parking- there comes a certain age when that just doesn't appeal anymore, no matter how big your backseat is. Thats why we buy houses! Still, the memories of that '69 GTO Judge and that gravel National Forest access road...

I pulled into a crowded parking lot and rolled down the car windows to make sure my Labrador retriever had fresh air. She was stretched out on the back seat, and I wanted to impress upon her that she must remain there. I walked to the curb backward, pointing my finger at the car and saying emphatically, "Now you stay. Do you hear me? Stay!"

The driver of a nearby car gave me a startled look. "I don't know about you, lady," he said incredulously. "But I usually just put my car in park."

Norman and his blonde wife live in Calgary. One winter morning while listening to the radio, they hear the announcer say, "We are going to have 8 to 10 centimeters of snow today. You must park your car on the even numbered side of the street, so the snowplow can get through." Norman's wife goes out and moves her car.

A week later while they are eating breakfast, the radio announcer says, "We are expecting 10 to 12 centimeters of snow today. You must park your car on the odd numbered side of the street, so the snowplow can get through." Norman's wife goes out and moves her car again.

The next week they are having breakfast again, when the radio announcer says "We are expecting 12 to 14 centimeters of snow today. You must park........... "then the electric power goes out. Norman's wife is very upset, and with a worried look on her face she says, "Honey, I don't know what to do. Which side of the street do I need to park on so the snowplow can get through?"

With the love and understanding in his voice like all men who are married to Blondes exhibit, Norman says, "Why don't you just leave it in the garage this time?" 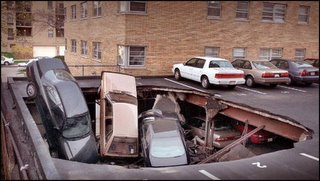 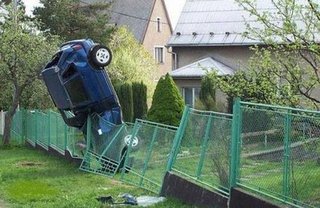 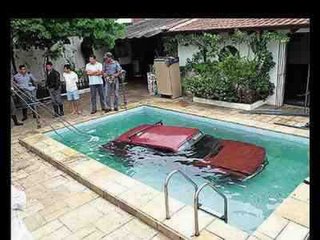 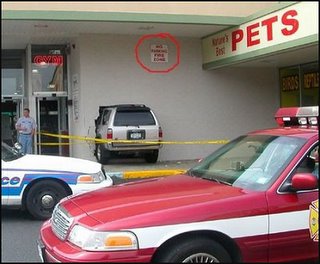 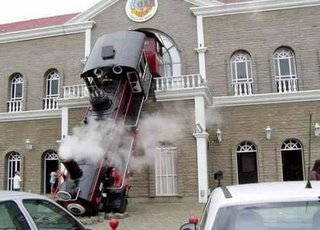 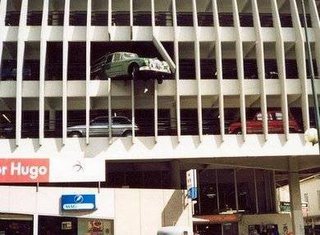 More at I Park Like An Idiot. Bumper stickers available. Lots of photos.

Learn all about Fancy Parking.

Solve your parking problems with the new Tango. 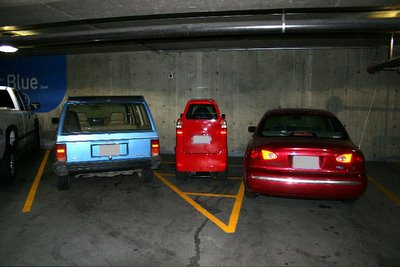 Don’t park here. We mean it.

IN THE PARKING LOT (Thanks, Wendy!)

An elderly Florida lady did her shopping and, upon returning to her car, found four males in the act of leaving with her vehicle. She dropped her shopping bags and drew her handgun, proceeding to scream at the top of her voice, "I have a gun, and I know how to use it! Get out of the car!"
The four men didn't wait for a second invitation. They got out and ran like mad.
The lady, somewhat shaken, then proceeded to load her shopping bags into the back of the car and got into the driver's seat.
She was so shaken that she could not get her key into the ignition. She tried and tried, and then it dawned on her why...For the same reason she did not understand why there was a football, a Frisbee and two 12 packs in the front seat...
A few minutes later, she found her own car parked four or five spaces farther down.

She loaded her bags into the car and drove to the police station to report her mistake. The sergeant to whom she told the story couldn't stop laughing. 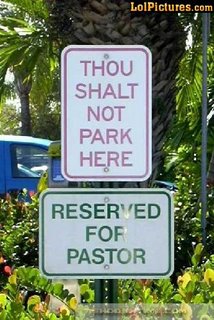 He pointed to the other end of the counter, where four pale men were reporting a car jacking by a mad, elderly woman described as white, less than five feet tall, glasses, curly white hair and carrying a large handgun.

No charges were filed.
MORAL OF THE STORY? If you're going to have a Senior Moment, make it memorable!

If you liked any of this so far, you will LOVE A Fine Display of Parking Skills. (via the Presurfer)

And so here's the moral of the old broad in the parking lot:

In America, if you pull a gun, we won't even give you a fuckign ticket if it's a funny story.

That was hilarious. Glad I dont have to get into the big city too often, its nuts trying to park there. Loved the story about leaving the dog in the car!
Have a great week.

You're a pip! (That's a compliment, btw.) Where do you come up with all this stuff? (Don't answer; I know it's complicated.)

(Also, what news about the "connection" made through my b**g? Anything? Hope, hope.)

We have the infamous VIP's who park in two spaces, whereas the rest of us mere mortals are resigned to just one -- or a half.

I wish I was important.

Hey, you have a great blog here! I'm definitely going to bookmark you!

I have a cars site/blog. It pretty much covers ##KEYWORD## related stuff.

Come and check it out if you get time :-)