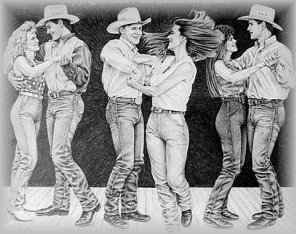 Prior to her trip to The South West, Buffy (a New Yorker) confided to her co-workers she had three goals for her trip..

1. She wanted to taste some real Bar-B-Que.

3. She wanted to have sex with a real cowboy.

Upon her return, the girls were curious as to how she fared.

"Let me tell you, they have a tree down there called a Mesquite and when they slow cook that brisket over that Mesquite, it's ooooh so good. The taste is unbelievable!"

"And I went to a real rodeo. Talk about athletes those guys wrestle full grown bulls! They ride horses at a full gallop, then jump off the horses and grab the bull by the horns and throw them to the ground! It is just incredible!"

They then asked, "Well tell us, did you have sex with a real cowboy?"

"Are you kidding? When I saw the outline of the condom they carry in the back pocket of their jeans, I changed my mind!"

Cowboy theme songs and other stuff.


Please Buy Me A Bra
by cowboy poet, Larry Connely

You know, I've never been much for shopping
In fact I try to stay away from town
Except when shipping time comes,
I ain't easily found.

But the day came when I had to go
And I left the kids with ma
But before I left she asked me,
"Would you pick me up a bra?"

Without thinkin' I said "sure,"
How tough could that job be?
I bent down and kissed her
And said, "I'll be back by three."

Well, when I done the things I needed
I started to regret
Ever offering to buy that thing,
I was working up a sweat.

I crossed the street to the ladies shop
With my hat pulled over my eyes,
I wasn't takin' any chances
On bein' recognized.

I walked right up to the sales clerk
I didn't hem or haw
I told the lady right straight out,
"Ma'am, I'm here to buy a bra."

From behind I heard some snickers
So I turned around to see
At least fifteen women in the store
And they's all gawkin' at me!

"What kind would you be looking for?"
"Well," I just scratched my head
I'd only seen one kind before
"Thought bras was bras," I said.
She gives me a disgusted look
"Well sir, that's where you're wrong.

Come with me," I heard her say,
And like a dog, I tagged along.
She took me down this alley
Where bras was on display
Well I thought my jaw'd hit the floor
When I seen that lingerie.

They had all these different styles
That I'd not seen before
I thought that I'd go crazy
'fore I left that women's store.

They had bras you wear for eighteen hours
And bras that cross your heart
There was bras that lift and separate,
And that was just the start.

They had bras that made you feel
Like you weren't wearing one at all
And bras that you can train in
When you start off when you're small.

Well I finally make my mind up
Picked a black and lacy one
I told the lady,
"Bag it up," And figured I was done.

But then she asked me for the size. 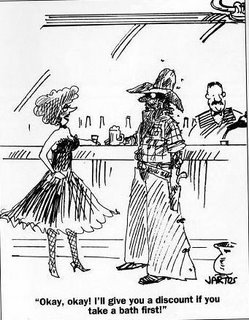 I didn't hesitate.
I knew them measurements by heart,
"Six and seven eighths."

I thought that she'd go into shock,
Musta took her by surprise
When I told her that my wife's bust
Was the same as my hat size.

"That's what I use to measure with,
I figured it was fair
But If I'm wrong I'm sorry ma'am."
This drew another stare.

By now a crowd had gathered
And they's all crackin' up
When the lady asked to see my hat,
To measure for the cup.

When she finally had it figured
I gave the gal her pay
I turned to leave the store,
Tipped my hat and said, "Good day."

My wife heard the whole story
'fore I ever made it home
She'd talked to fifteen women
Who'd called her on the phone.

She was still a-laughin'
But by then I didn't care
Now she don't ask and I don't shop
For no more women's underwear. 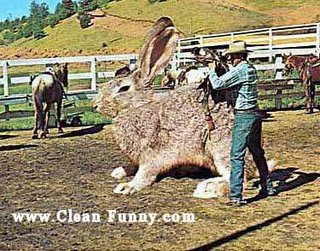 A cowboy rode into town and stopped at the saloon for a drink. Unfortunately, the locals always had a habit of picking on newcomers. When he finished, he found his horse had been stolen.

He comes back into the bar, handily flips his gun into the air, catches it above his head without even looking and fires a shot into the ceiling. "Who stole my horse?" he yelled with surprising forcefulness.

Some of the locals shifted restlessly.

He had another beer, walked outside, and his horse was back! He saddled up and started to ride out of town.

The bartender wandered out of the bar and asked, "Say partner, what happened in Texas?"

The cowboy turned back and said, "I had to walk home!"

I just couldn't get away with ignoring the movie if I'm going to feature cowboys. Still haven't seen it. I was surprised that the movie actually was shown in my tiny town, but I can't make myself hire a babysitter so I can go to a movie alone. 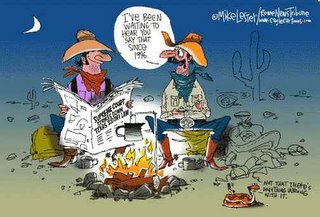 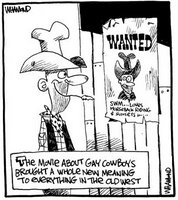 A Baptist Preacher was seated next to a cowboy on a flight to Texas. After the plane took off the cowboy asked for a whiskey and soda, which was brought and placed before him. The flight attendant then asked the preacher if he would like a drink. 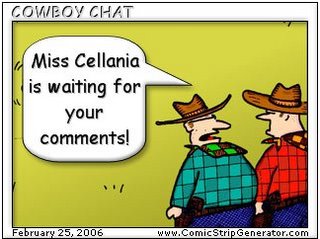 Appalled, the preacher replied, "I'd rather be tied up and taken advantage of by women of ill-repute than let liquor touch my lips."

The cowboy then handed his drink back to the attendant and said, "Me too, I didn't know we had a choice."

Thought for today: I won't be wronged, I won't be insulted, and I won't be laid a hand on. I don't do these things to other people and I expect the same from them. -John Wayne, in The Shootist

And what's this Brokeback Mountain thing, I thought cowboys were straight shooters.

I love your blog, it's a good laugh.

Yee-haw! Inspirational stuff. I had to restrain myself from booking a flight to Texas on the spot.

Oldguy, you need to read up on Brokeback Mountain! Its a movie thats going to win a ton of Oscars. The theme is "Not all cowboys are alike."

When I see that round can in a back pocket, I turn the other way, that is a major turn off and I know it's not a condom. LOL That poem was really funny. Lots of giggles today.

Thank you for your prayer for Studley...

I like the bra joke! Finding all this stuff must take you ages. Hope you have a good week.

Annie, it doesn't take as much time as it seems. The way I've got it set up, the material comes to me! I am always glad to get suggestions, submissions, and feedback.

I would love to see Brokeback Mountain, but my husband wouldn't. So, I'd be on my own.

I know a Canadian cowboy that I've got to send a link to your post to! He will really enjoy it, as do I. However you accumulate your info, you do a great job of organizing and using it.

were those condoms too big, or too small? And what about urban cowboys? eh!?

Boy, you're a busy blogger. Thanks for finding the time to visit my blog.

I have a picture of me 'riding' a life-sized replica of the famous bull, Promised Land. And I have a videotape of the even more famous bull Bodacious. That's as close as I'll come to being a cowboy, though.

'Gettalong little bunny' doesn't have the same ring to it

Funny you should post this the day I'm running under the whip to put together a special feature section on a rodeo. I've never been a cowboy myself, but both my brothers were.

"There are two theories to arguing with a woman -- neither one works."

You had to let the cat out of the bag, didn't you?

El, YOU tell ME about urban cowboys... I'm a hillbilly, remember? I don't get to the city often!

JB, I don't know any cowboys, either, but I'm willing to meet some!

Thanks for your comment on my site. Yup Monty Python and the Holy Grail is one of my favorite movies. Great stuff right there. Hope you come back and visit sometime.