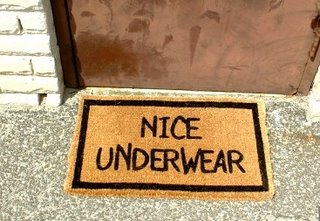 Foundation garments. What a silly thing to call underwear! A foundation is the part of your house made of cement blocks. Or that box under your mattress that no longer has springs. What we have here is underwear. What you wear under your normal clothing. What your mother always told you to change every day, “in case you have an accident”. Huh, what do you think it means to “have an accident”? Of course, Mom meant for the sake of the emergency room personnel, who are known for critiquing the underwear they have to cut away from a trauma victim. Like they have the time to spare.

I don’t know how I managed to collect this many links to do with underwear! But the proper thing to do would be to share them. Feel free to tell your friends about this post. You can even send it to them by clicking on the little envelope down there by the comment link. 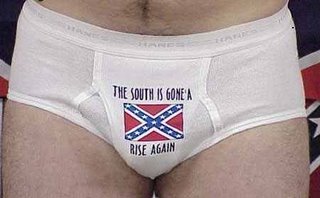 I started out by emailing my male friends and asking what kind of underwear they wear. Such a simple question. It used to be "boxers or briefs?" but no. Half the guys emailed me back saying "Depends". Har har har. I realize y'all are not getting any younger, but.. the other half said they don't wear any. Its called "going commando" apparently. The experience was a real eye-opener, so to speak.

Gallery of Famous Women in Slips.

Tramp Lamps, made from lingerie.

Petticoat Pond. File this under bizarre. (lifted from Saurly Yours)

The Almost Naked Animals website features cartoons of animals in their underwear, which merited it a place in this post.

Fundies, underwear for the two of you.

The story of The Negligee.

“Knickers” is a British word for underwear. Ten percent of the English wear them for three days straight before changing.

Its always important to make sure a sports bra performs. (Not work-safe)

Krust critiques bras. Thongs are discussed in the comments. I had no idea that men felt that way about matching bra-and-panty sets, but I will file that away for the future. I am the optimistic sort, after all. 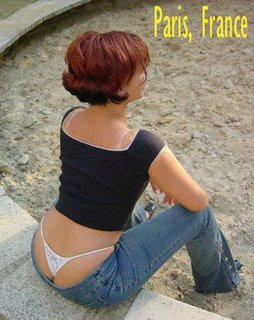 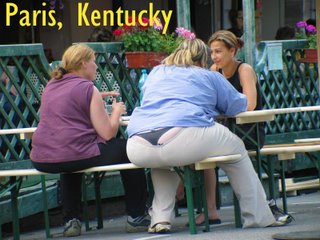 A rather confident young man walks into a bar and takes a seat next to a very attractive young woman. He gives her a quick glance, then casually looks at his watch for a moment.

The woman notices this and asks, "Is your date running late?"

"No," he replies, "I just bought this state-of-the-art watch and I was testing it."

Intrigued, the woman says, "A state-of-the-art watch? What's so special about it?"

"It uses alpha waves to telepathically talk to me," he explains.

"Well, it says that you're not wearing any panties...".

The woman giggles & replies, "Well it must be broken then, because I am wearing panties!"

The man exclaims, "Damn-- this thing must be an hour fast!". 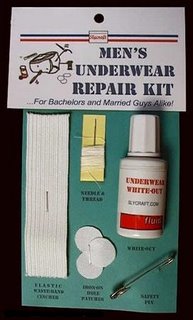 A young man wanted to purchase a gift for his new sweetheart's birthday, and as they had not been dating very long, after careful consideration he decided a pair of gloves would strike just the right note: romantic, but not too personal. Accompanied by his sweetheart's younger sister, he went to Nordstrom's and bought a pair of white gloves. The sister purchased a pair of panties for herself. During the wrapping the clerk mixed up the items and the sister got the gloves and the sweetheart got the panties. Without checking the contents, the young man sealed the package and sent it to his sweetheart along with this note:

I chose these because I noticed that you are not in the habit of wearing any when we go out in the evening. If it had not been for your sister I would have chosen the long ones with the buttons, but she wears the short ones that are easier to remove.

These are a delicate shade, but the lady I bought them from showed me the pair she had been wearing for the past three weeks and they were hardly soiled. I had her try yours on for me and she looked really smart.

I wish I was there to put them on for you the first time, as no doubt other hands will come in contact with them before I have a chance to see you again.

When you take them off, remember to blow in them before putting them away as they will naturally be a little damp from wearing. Just think how many times I will kiss them during the coming year. I hope you will wear them for me on Friday night.

All my love, Roger

P.S. The latest style is to wear them folded down with a little fur showing.

THE WIDDER WOMAN (Thanks, April!)

A successful rancher died and left everything to his devoted wife. She was a very good-looking woman and determined to keep the ranch, but knew very little about ranching, so she decided to place an ad in the newspaper for a ranch hand. Two cowboys applied for the job. One was gay and the other a drunk.

She thought long and hard about it, and when no one else applied she decided to hire the gay guy, figuring it would be safer to have him around the house than the drunk. He proved to be a hard worker who put in long hours every day and knew a lot about ranching. For weeks, the two of them worked, and the ranch was doing very well.

Then one day, the rancher's widow said to the hired hand "You have done a really good job, and the ranch looks great. You should go into town and kick up your heels." The hired hand readily agreed and went into town one Saturday night. One o'clock came, however, and he didn't return. Two o'clock, and no hired hand. He returned around two-thirty, and upon entering the room, he found the rancher's widow sitting by the fireplace with a glass of wine, waiting for him. She quietly called him over to her.

"Unbutton my blouse and take it off," she said.

Trembling, he did as she directed.

"Now take off my boots."

"Now take off my socks."

He removed each gently and placed them neatly by her boots.

"Now take off my skirt."

He slowly unbuttoned it, constantly watching her eyes in the fire light. 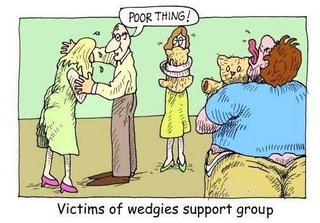 Again, with trembling hands, he did as he was told and dropped it to the floor.

By the light of the fire, he slowly pulled them down and off.

Then she looked at him and said, "If you ever wear my clothes into town again, you're fired."

UPDATE from the comments: Girl, you totally forgot Mormon Underwear. If you're a devout mormon, you never take it off. You have sex with it on.

Thought for today: This morning when I put on my underwear I could hear the fruit-of-the-loom guys laughing at me. -Rodney Dangerfield

This is so ironic. I, myself, put on underwear just this morning.

(Now then, tell me about last night's storm!)

Have you ever seen the old whale bone corsets from back in the day, these were foundation garments in the true sense of the word..... so I've been told.

JB, you'll to tell us the rest of that story!

Havril, the world is full of coincidences ... I did, too!

Hoss, I go by topic, not time. The storm was awesome! But it kept knocking me off line.

Julian, so now I know where you are. I forgot you Brits do things backwards. (as she ducks)

Peter, I get comments sent to me at gmail, and the ads that came up with your message showed me EXACTLY where to get those!

Girl, you totally forgot Mormon Underwear. If you're a devout mormon, you never take it off. You have sex with it on.

heh. About the trauma thing and having on clean underwear, as Bill Cosby says, "First you say it, and then you do it!" PERFECT.

Your house sits on those cement blocks all day, therefore it's called a foundation.

We sit on our butts all day, therefore that's our foundation so underwear are foundation garments.

Makes perfect sense to me. ;)

Cool! I'm immortalized in your underwear post! I should add a caveat: they DO take them off when bathing and some take them off for swimming or sports, but they're expected to wear them at all other times (if they're devout), including during sex. The 'modern' church is kinda embarassed about that, so they don't talk about it a lot unless they're forced to.

Here is an article about a recent auction and how much they got for what they call "temple garments" ($1000!!!)

Here is an eye-opening post about what Mormon fundamentalists must do and believe. This quote is excerpted from it:

Temple garments are to be worn at all times, night and day. (Some leaders make exceptions for during sex as long as they are replaced immediately afterwards, but the official instruction in the temple makes no such allowance.)

Anyway, thought you might be interested! I have a DD (Doctorate in Divinity). I don't know it all, just enough to be dangerous. ;o)

Saur, always glad to get more links, even at the last minute. Thanks!

Bonanza Jellybean, that should have been my thought for today... if I had thought of it.

Old Guy, it does make perfect sense. There's no place for that sort of thing here.

What your mother always told you to change every day, “in case you have an accident”.

I always liked Cosby's take on this.

"Why? Why do you need clean underwear? Cuz first you say, then you DO it!"

Not that anyone is interested, but I use briefs.

I like the support of them and really can't see how anyone can use boxers, except maybe with suits and other loose pants.

I still have plenty of those Calvin Klein underwear left from that commercial I did for them...

Ummm, Saur is completely mistaken in her information about Mormonism (even the point of having to wear their garments during sex. That's just not true). The link she provided is to someone who is either misquoting Mormons or making fun of them.

Up until six years ago, I was a card-carrying, temple-attending full fledged Mormon. Even though I no longer associate myself with that church, I'll always defend the TONS of misinformation out there.

Anyway.... that just kind of got under my skin a bit- but I'm really not trying to flame. :)