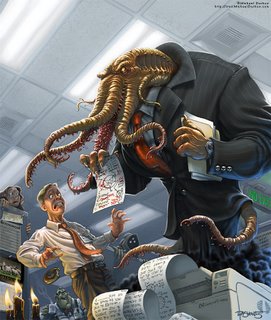 Note: I am going out of town for the weekend. I may or may not be able to post from my alternate location. If not, there will be new content here Tuesday.

A mathematician, an economist and an accountant apply for the same job.

The title art for this post is named Wage Slave, by Michael Dashow. You can purchase merchandise with this image here.

The Corporate Guide to Kissing Ass.

If you hear your company talk about hiring a consultant, send them to this website. They’ve done consulting for businesses like AndyCo. 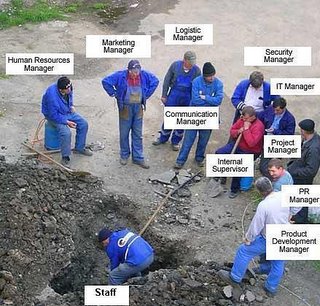 Mr. Snider was known far and wide as a hard-nosed boss who
watched his employees like a hawk. He was making one of his regular tours of the factory when he spotted a young man leaning against a pile of boxes just outside the foreman's office. Since George, the foreman, wasn't around, Snider stood off to the side and watched to see just how long the young man would stand around doing nothing.

The young man yawned, scratched his head, looked at his watch and sat on the floor. He took out a nail file and began cleaning his nails. Then he stretched, yawned again and leaned back on the pile of boxes.

Snider stepped from his hiding place and walked up to the young man. "You!" he boomed. "How much do you make a week?"

The young man looked up indifferently. "Two hundred and fifty dollars," he said.

Snider swooped into the cashier's office, took $250 from the cash box and returned. "Take it," he said, "and get out! Don't let me see you around here again!" 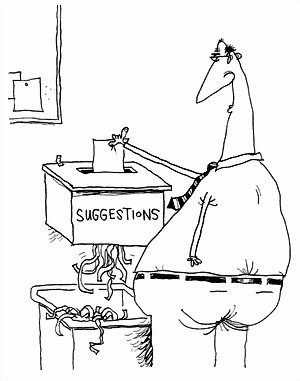 The young man took the cash, put it in his pocket and left.

Snider snorted at his lack of remorse, embarrassment or any other feeling. Then he went looking for George. When he found him, Snider was red with anger. "That idler in front of your office," Snider said. "I just gave him a week's pay and fired him. What's the matter with you, letting him stand around as though he had nothing to do?"

"You mean the kid in the red shirt?" George asked.

"He was waiting for the twenty dollars we owe him for lunch," George said. "He works for the coffee shop around the corner."

1. BLAMESTORMING : Sitting around in a group, discussing why a deadline was missed or a project failed, and who was responsible.

2. SEAGULL MANAGER : A manager, who flies in, makes a lot of noise, craps on everything, and then leaves.

3. ASSMOSIS : The process by which some people seem to absorb success and advancement by kissing up to the boss rather than working hard.

4. SALMON DAY : The experience of spending an entire day swimming upstream only to get screwed and die in the end.

8. SITCOMs : Single Income, Two Children, Oppressive Mortgage. What Yuppies get into when they have children and one of them stops working to stay home with the kids.

9. STRESS PUPPY : A person who seems to thrive on being stressed out and whiny.

10. SWIPEOUT : An ATM or credit card that has been rendered useless because magnetic strip is worn away from extensive use.

11. XEROX SUBSIDY : Euphemism for swiping free photocopies from one 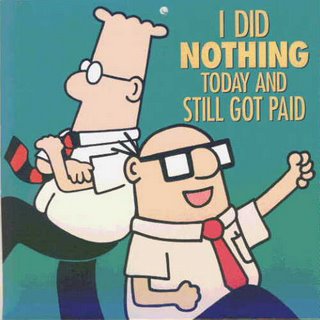 12. IRRITAINMENT : Entertainment and media spectacles that are annoying but you find yourself unable to stop watching them. The J-Lo and Ben wedding (or not) was a prime example - Michael Jackson, another...

13. PERCUSSIVE MAINTENANCE : The fine art of whacking the crap out of an electronic device to get it to work again.

14. ADMINISPHERE : The rarefied organizational layers beginning just above the rank and file. Decisions that fall from the adminisphere are often profoundly inappropriate or irrelevant to the problems they were designed to solve.

15. 404 : Someone who's clueless. From the World Wide Web error Message "404 Not Found," meaning that the requested site could not be located.

16. GENERICA : Features of the American landscape that are exactly the same no matter where one is, such as fast food joints, strip malls, airports, and subdivisions.

17. OHNOSECOND : That minuscule fraction of time in which you realize that you've just made a BIG mistake.(Like after hitting send on an email by mistake) 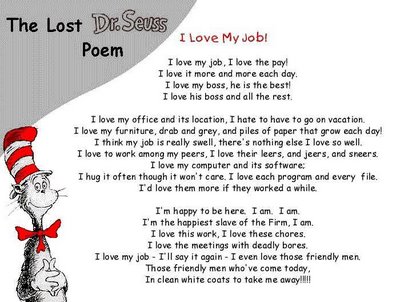 Thought for today: The last person that quit or was fired will be held responsible for everything that goes wrong.

Your page isn't loading properly at the moment. I think it's to do with the embedded You Tube videos, which is down at the moment.

Subsequently, your trackers may not be registering a lot of your visitors.

Just so you know.

Have a great weekend!

Is that yours or is that copied?

Hope you have a great weekend. Sadly, mine will be spent working. :-)

I notice my post came in right behind the EVER FAVORITE "make extra money" SPAM blogger. Oh BOY! Lucky ME! The account joke reminds me of a flight I was on sitting next to an account who said, "I don't feel I am doing my job if I don't get my clients dudited every year" to which I said. "That makes me wonder if you have ANY clients!" ~ jb///

I told my family about you tonight at dinner.

We're all hopin' for a good weekend for you.

Arbroath, thanks, i think its ok now.

Toad, no, I didn't write any of today's stuff.

JB, I'm pretty good at editing that kind of thing out!

Clueless, I'm having a great time, thank you!