You can’t beat the loyalty of a dog, unless you count MY dog, who decided a few months ago that she’d rather live with the neighbors. She sits out in their front yard all day, and when I drive past, she stares at me. I swear she’s laughing! After I took her in off the street, allowed her to birth EIGHT puppies in my dining room, then got her spayed, bathed, and trained... this is the thanks I get? I guess that’s why they call a dog MAN’s best friend, because she sure doesn’t care much for this woman.

Be that as it may (whatever that means, I've used that phrase all my life), people love their dogs. I've had a few good dogs in my life, so I know they exist. Besides, there's enough dogs on the net to convince anyone they must be worthwhile. At least, some of them. 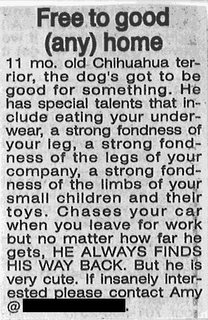 This is sad. You can walk your dog and pretend you have someone’s hand to hold.

When a dog has a bar mitzvah, its called a Bark Mitzvah.

Singing Dog. This is clever and cute.

A man went to visit his 90 year old grandfather in a very secluded rural area of the state he lived in. After spending the night, his grandfather prepared breakfast for him consisting of eggs and bacon.

He noticed a film-like substance on his plate and he questioned his grandfather. "Are these plates clean?"

His grandfather replied, "Those plates are as clean as cold water can get them, so go on and finish your meal."

That afternoon, while eating the hamburgers his grandfather made for lunch, he noticed tiny specks around the edge of his plate, and a substance that looked like dried egg yolks.

He asked again, "Are you sure these plates are clean?"

Without looking up from his hamburger, the grandfather said, "I told you before, those dishes are as clean as cold water can get them. Now don't ask me about it anymore."

Later that afternoon, he was on his way out to get dinner in a nearby town. 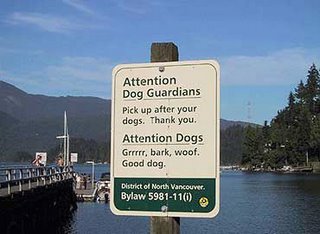 As he was leaving, his grandfather's dog started to growl and wouldn't let him pass.

He said, "Grandfather, your dog won't let me out."

Without diverting his attention from the football game he was watching on TV his grandfather shouted, "COLDWATER, Go lay down!"

If you had a pet store that specializes in dogs, what would you name it? 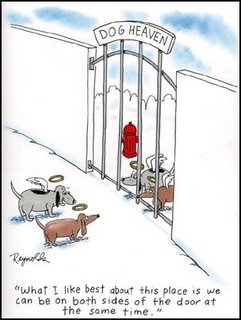 Reason a dog has so many friends is that he wags his tail instead of his tongue. - Anonymous

If there are no dogs in Heaven, then when I die I want to go where they went. - Will Rogers

Don't accept your dog's admiration as conclusive evidence that you are wonderful. - Ann Landers

There is no psychiatrist in the world like a puppy licking your face. - Ben Williams

A dog is the only thing on earth that loves you more than they love themselves. - Josh Billings

The average dog is a nicer person than the average person. - Andy Rooney 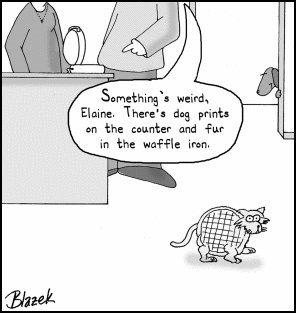 We give dogs time we can spare, space we can spare and love we can spare. And in return, dogs give us their all. It's the best deal man has ever made. - M. Acklam

Ever wonder if other dogs think poodles are members of a weird religious cult. - Rita Rudner

Anybody who doesn't know what soap tastes like never bathed a dog. - Franklin P.

If your dog is fat, YOU aren't getting enough exercise. - Unknown

Ever consider what our dogs must think of us? We come back from a grocery store with the most amazing haul - chicken, pork, half a cow. They must think we're the greatest hunters on earth! - Anne Tyler 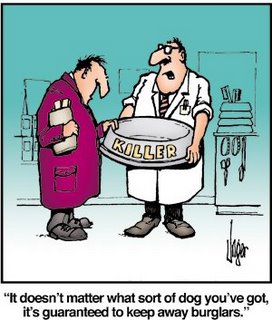 You can say any foolish thing to a dog, and the dog will give you a look that says, 'My goodness, you're right! I never would've thought of that!' - Dave Barry

Dogs are not our whole life, but they do make our lives whole. - Roger Caras

If you think dogs can't count, try putting three dog biscuits in your pocket and then giving Fido only two of them. - Phil Pastoret

My goal in life is to be as good of a person as my dog already thinks I am. -Tming

Here's a site for all things dog, Dogster.

Blog of the Day: Larry Olaf. Be sure to read his profile. 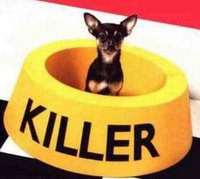 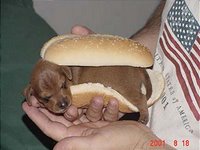 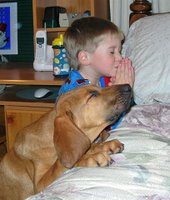 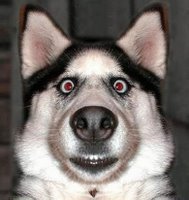 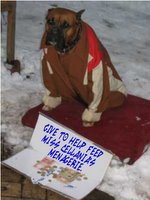 Previously on Miss Cellania: Our Pets

Thought for today: Lord, please make me the kind of person my dog thinks I am.

ROFL those dogs were ugly, but I couldn't help but feel sorry for the poor fellas. They're the kind you can't help but love. I voted for Munchkin though, he looks a little like a boar.

Thanks for the giggles, I needed them to get my Monday started off right.

I wish I had a dog so I could know what kind of person I am.

I KNOW what kind YOU are.

Are you in the underground or surface mine business?

Mr. Gator, no, I'm in media. But I am familiar with mining. Why?

Your blog looks more like a site than a blog and a great site at that!!! Keep it going and hey that's a nice photo of yours!!!

Don't give up on your dogs yet. They all can be trained.dogsI'm a guy that's looking to get a puppy that's already trained. So far, that has not happened.dogs

never hurt your dog no matter what it does. if it bites you its cuz ur doin summuw it dont like or your scaring it.calm your dog down, he will soon be fine.

miss do you no lots about dogs?