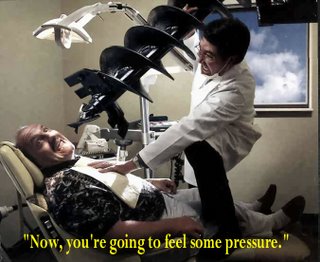 I have what some call “East Kentucky Chalk Teeth”. When your teeth are hereditarily built this way, you can brush six times a day, floss, avoid sweets, use flouride, and see a dentist regularly, and they will still fall apart. So I have extensive dental work collected over quite a few decades. I technically have all my teeth, but every one is filled, repaired, capped, or crowned in some manner.

When I moved back to Kentucky after many years away, I tried more than one dentist. They all had the same technique. “You have a cavity. Ya want me to pull that tooth?” I was shocked, but most folks here would just have the tooth pulled. Its much cheaper than repairing it. My current dentist has my loyalty because 1) he wants to try and save each tooth, and b) he lets me have all the laughing gas I require. He charges an arm and a leg, but I still have all my teeth! (at least technically) 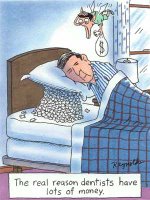 If your name was Toothaker, wouldn’t you feel pressured to go to dental school?

The Cohens were shown into the dentist's office, where Mr. Cohen made it clear he was in a big hurry.

"No fancy stuff, Doctor," he ordered. "No gas or needles or any of that stuff. Just pull the tooth and get it over with."

"I wish more of my patients were as stoic as you," said the dentist admiringly. "Now, which tooth is it?"

Mr. Cohen turned to his wife...

"Show him your tooth, Honey." 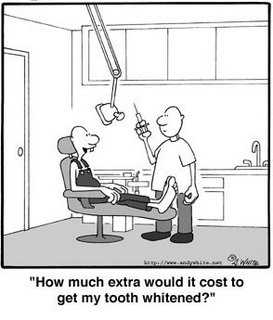 A man went to his dentist because his mouth felt funny. The dentist examined him and said, "That new upper plate I put in for you six months ago is eroding. What have you been eating?"

The man replied, "All I can think of is that about four months ago my wife made some asparagus and put some stuff on it that was delicious. Hollandaise sauce. I loved it so much I now put it on everything - meat, toast, fish, vegetables, everything."

"Well," said the dentist, "that's probably the problem. Hollandaise sauce is made with lots of lemon juice, which is highly corrosive. It's eaten away your upper plate. I'll make you a new plate, and this time I'll use chrome."

"Why chrome?" asked the patient.

To which the dentist replied, "It's simple. Everyone knows that there's no plate like chrome for the hollandaise!"

The Dentist number from Little Shop of Horrors.

THE REUNION
Have you ever been guilty of looking at others your own age and thinking,
"Surely I can't look that old?" Read on:

I was sitting in the waiting room for my first appointment with a new dentist.
I noticed his DDS diploma which bore his full name. Suddenly, I remembered a
tall, handsome dark-haired boy with the same name had been in my high school
class some 40-odd years ago. Could he be the same guy that I had a secret crush
on, way back then?

Upon seeing him, however, I quickly discarded any such thought. This balding, gray-haired man with the deeply lined face was way too old to have been my classmate. Hmmm...or could he????

After he examined my teeth, I asked him if he had attended Morgan Park High School.

"When did you graduate?" I asked.

"You were in my class!" I exclaimed 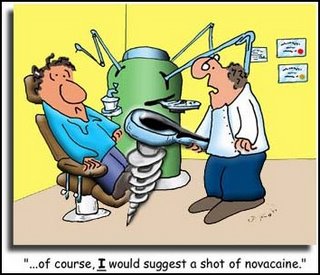 He looked at me closely. Then that ugly, old, wrinkled son-of-a-bitch asked, "What did you teach?" (Thanks, Linda!)


Thought for today: Happiness is your dentist telling you it won't hurt and then having him catch his hand in the drill. -Johnny Carson

jerry: that's a good one. dentists!

beth: yeah, who needs 'em? not to mention the blacks and the jews.

Ouch! "There's no place like chrome for the Hollandaise."

You forgot one of the funniest dentistry scenes: Peter Sellers in The Pink Panther!

Dentists aren't my favorite doctor. Most doctors can work on you without painful, sharp instruments.

Saur Kraut said...
Dentists aren't my favorite doctor. Most doctors can work on you without painful, sharp instruments.


Yea, but where's the fun in that?

Glad I stopped by, needed a laugh and I always get the best ones here!

My dentist is so hot and so sweet and so wonderful that I make up reasons to go see him. I never have cavities, but I sure have clean teeth.

I too had some dental work yesterday. The experience is much better than it used to be.. but my goodness.. I still hate that drill!!

My best friend is a dentist, and he said to me that, "people don't like me JUST because I'm a DENTIST!" Trying to be a REAL GOOD friend, I said, "STEVE... that has NOTHING to do with it!" ~ jb///

Fortunately, I never need go to the dentist again. Which is good, because the Little Shop scared me off.

I have completely forgotten, or never knew, the dentist references in The Pink Panther and Seinfeld. But I wouldn't mind meeting Bar Bar A's dentist!

Mine is hot, but married. Going to get my teeth cleaned TOMORROW, first time since I quit smoking!

Gee, I'm glad I'm not married to you. I thought my husband's rotten teeth were bad -- he has about three teeth that are in their natural state.

Just dropping by to say "hi"! And I may have to pick your brain about your blog layout. But first, I will try to wrestle with HMTL until more hair turns gray.

I also share the same sentiment with you in terms of dental procedures. I'd want to retain all my teeth, at least technically. Crowning and other processes are fine. I'm just not comfortable with total extractions and fake replacements.

Continue to flash those pearly whites!