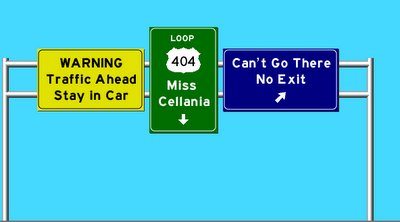 This post was inspired by the annual Snowbird Exodus down I-75. For every car going north, there are maybe ten going south. It happens every year. Soon as the grandkids leave after Christmas, they hop in their cars and RVs in Ontario, Michigan, Ohio, or other cold places and head to Florida. We won't see them again til about April.

Driving the mamamobile is such a way of life that it took a New York City mass transit strike to remind me that there are some places in America where not everyone drives a car. I spend all too much time in the car, ferrying the kids around, getting to work, and driving for hours just to get a good Indian meal. I can still walk downtown, but there's not much to walk to there anymore, thanks to urban sprawl (even in small towns). I once lived within walking distance of my workplace. I didn't move, the job did. Still, I can consider myself lucky to drive only three miles to work. Some folks spend as much time in their cars as they do on the job! And, of course, some folks drive for a living.

You are driving the taxi here, but you don’t have to drive it well!

All commuters, at one time or another, have though they could design a better freeway. Put yourself to the test with Me and The Roads, the Java road-building game.

Just how much CAN you cheat when using a toll road? (Thanks, Thor!) 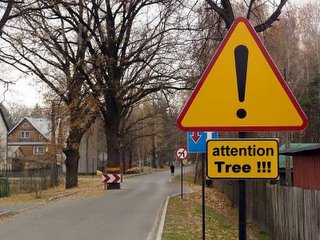 If you ever have to go to traffic school for road violations, don’t put down any of these answers on your test.

Traffic violations aren’t easy for the police, either. I am amazed at this trooper's patience!

This is a good place to repost the phone conversation of a guy witnessing an accident and the road rage that follows. Old, but still funny!

These are statements from insurance forms where car drivers tried to summarize accident details in as few words as possible. Such instances of faulty writing serve to confirm that incompetency can be highly entertaining.

1. Coming home I drove into the wrong house and collided with a tree I don't have.
2. The other car collided with mine without giving warning of its intent.
3. I collided with a stationary truck coming the other way.
4. In my attempt to kill a fly, I drove into a telephone pole.
5. I had been shopping for plants all day and was on my way home. As I reached an intersection, a hedge sprang up, obscuring my vision and I did not see the other car.
6. I had been driving for forty years when I fell asleep at the wheel and had an accident.
7. I was on my way to the doctor with rear end trouble when my univer 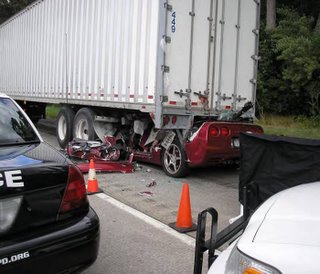 sal joint gave way causing me to have an accident.
8. My car was legally parked as it backed into the other vehicle.
9. As I approached the intersection a sign suddenly appeared in a place where no sign had ever appeared before, making me unable to avoid the accident.
10. I told the police I was not injured, but upon removing my hair, I found that I had a fractured skull.
11. I was sure the old fellow would never make it to the other side of the road when I struck him.
12. I saw a slow-moving, sad-faced old gentleman as he bounced off the hood of my car.
13. The indirect cause of the accident was a little guy in a small car with a big mouth.
14. I was thrown from my car as it left the road, and was later found in a ditch by some stray cows.
15. A pedestrian hit me and went under my car.
16. I thought my window was down, but I found out it was up when I put my head through it.
17. To avoid hitting the bumper of the car in front, I struck the pedestrian.
18. The guy was all over the road. I had to swerve a number of times before I hit him.
19. The pedestrian had no idea which way to run, so I ran over him.
20. An invisible car came out of nowhere, struck my car and vanished.
21. A truck backed through my windshield into my wife's face.
22. I pulled away from the side of the road, glanced at my mother-in-law, and headed over the embankment.

RULES TO LIVE BY 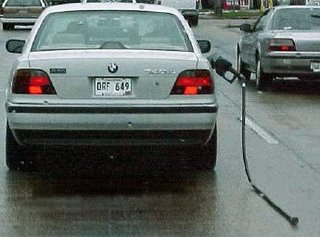 Always replace the pump nozzle after fueling up. 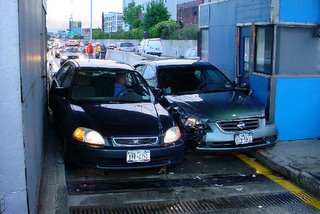 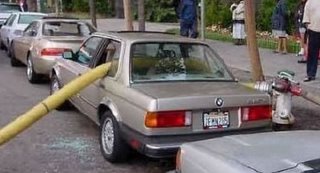 Do not block a fireplug with your luxury car. 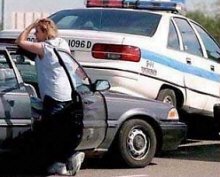 Keep a safe distance while following a police car.

It seems that the state of Ohio decided that too many unskilled labourers from the neighbouring Commonwealth of Kentucky were taking too many jobs away from native Ohioans. To stem this tide, authorities set up a checkpoint on the Cincinnati side of the Ohio River and dispatched state troopers to patrol the Roebling Bridge that connected the two states along Interstate 75.

The troopers at the checkpoint station began to stop cars at random and inquire into motorists' motives in driving into the Buckeye State. The first car stopped belonged to a medical school graduate who, on request, presented his credentials, and explained that he was driving to an awaiting internship at a large Cleveland Hospital. Deciding medicine was a respectable field, the cops waved the young doctor through. In similar fashion, the troopers stopped a second motorist. Upon learning that the driver was an accomplished architect, the troopers, likewise, waved him through, determining that architecture was also a worthy profession. A third motorist explained he was driving into Ohio to seek employment and that he was a pilot. Figuring there was always a need for pilots, the state police waved him through. 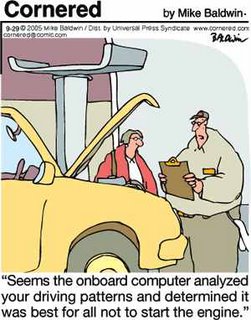 The troopers stop the very next car. "License and registration, please," instructed the senior trooper, "And state your business in seeking entry into Ohio."
"I'm looking for work," responded the hapless Kentuckian.
"What kind of work do you do?"
"I cut kindling.
"Oh, no!" the state trooper remonstrated, "No more hillbillies coming in here and taking all the jobs!"
"What do you mean by 'hillbillies'?" the motorist protested, "You just done let my brother in the car ahead of me come through!"
"--Because your brother said he was a pilot!"
"That's right...and he can't 'pile-it' less'n I cut it!"

Thought for today: The journey of a thousand miles begins with a broken fan belt and leaky tire.

Not all of 'em are heading for Florida. A fair number of 'em come right through Victoria, TX (my home town) on their way to the Rio Grande Valley. We call them "Winter Texans," and there are tens of thousands of them!