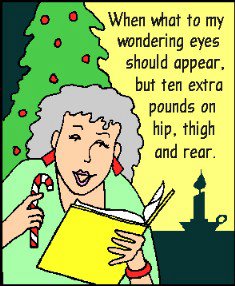 The midwinter solstice, the cold and dark time of year when we look for reasons to hang lights to illuminate the long night, and add a layer of fat to guard against the cold. And why not? We cover ourselves with sweaters to hide the fat rolls, and most fresh fruits and vegetables are out of season anyway. We start to eat like residents of the Arctic Circle.. meat, dairy products, and as much sugar as we can stuff in for energy. No wonder overeating has become associated with winter holidays. Between Thanksgiving, Hanukah, Christmas, Kwanza, and New Years, multiplied by company parties, church banquets, family feasts, bake sales, potlucks, snacks, and gifts, we may as well just try rolling down the sidewalk inside of walking.


Forbes slideshow on the world’s most fattening holiday foods. Includes ingredient lists, but sadly, no recipes.

But its OK to each as much as you want as long as its cold, according to The Christmas Diet!

But whatever you do, avoid the deadly BREAD.

If you want to lose your appetite completely, read about this Norwegian sheep’s head feast.

Get down with the Pillsbury Doughboy! Choreograph his dance moves, add music, and send to your buddies. 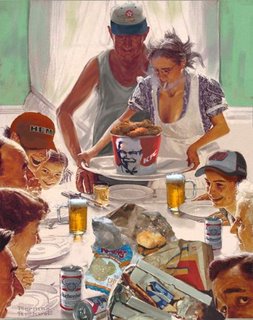 1. Avoid carrot sticks. Anyone who puts carrots on a holiday buffet table knows nothing of the Christmas spirit. In fact, if you see carrots, leave immediately. Go next door, where they're serving rum balls.

2. Drink as much eggnog as you can. And quickly. Like fine single-malt scotch, it's rare. In fact, it's even rarer than single-malt scotch. You can't find it any other time of year but now. So drink up! Who cares that it has 10,000 calories in every sip? It's not as if you're going to turn into an eggnog-aholic or something. It's a treat. Enjoy it. Have one for me. Have two. It's later than you think. It's Christmas!

3. If something comes with gravy, use it. That's the whole point of gravy. Gravy does not stand alone. Pour it on. Make a volcano out of your mashed potatoes. Fill it with gravy. Eat the volcano. Repeat.

4. As for mashed potatoes, always ask if they're made with skim milk or whole milk. If it's skim, pass. Why bother? It's like buying a sports car with an automatic transmission.

5. Do not have a snack before going to a party in an effort to control your eating. The whole point of going to a Christmas party is to eat other people's food for free. Lots of it. Hello?

6. Under no circumstances should you exercise between now and New Year's. You can do that in January when you have nothing else to do. This is the time for long naps, which you'll need after circling the buffet table while carrying a 10-pound plate of food and that vat of eggnog.

7. If you come across something really good at a buffet table, like frosted Christmas cookies in the shape and size of Santa, position yourself near them and don't budge. Have as many as you can before becoming the center of attention. They're like a beautiful pair of shoes. If you leave them behind, you're never going to see them again.

8. Same for pies. Apple. Pumpkin. Mincemeat. Have a slice of each. Or, if you don't like mincemeat, have two apples an 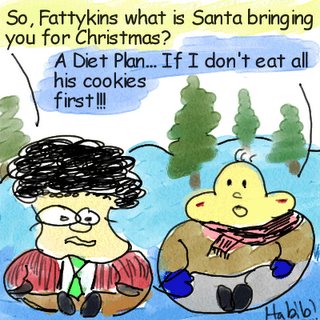 d one pumpkin. Always have three. When else do you get to have more than one dessert? Labour Day?

9. Did someone mention fruitcake? Granted, it's loaded with the mandatory celebratory calories, but avoid it at all cost. I mean, have some standards.

10. One final tip: If you don't feel terrible when you leave the party or get up from the table, you haven't been paying attention. Reread tips; start over, but hurry, January is just around the corner.

'Twas the night before Christmas and all round my hips were Fannie May candies that sneaked past my lips. Fudge brownies were stored in the freezer with care in hopes that my thighs would forget they were there.

While Mama in her girdle and I in chin straps had just settled down to sugar-borne naps. When out in the pantry there arose such a clatter I sprang from my bed to see what was the matter.

Away to the kitchen I flew like a flash tore open the icebox then threw up the sash. The marshmallow look of the new-fallen snow sent thoughts of a binge to my body below.

When what to my wandering eyes should appear: a marzipan Santa with eight chocolate reindeer! That huge chunk of candy so luscious and slick I knew in a second that I'd wind up sick.

The sweet-coated Santa, those sugared reindeer I closed my eyes tightly but still I could hear; On Pritzker, on Stillman, on weak one, on TOPS ; a Weight Watcher dropout from sugar detox.

My droll little mouth and my round little belly they shook when I laughed like a bowl full of jelly. I spoke not a word but went straight to my work ate all of the candy then turned with a jerk.

And laying a finger beside my heartburn I gave a quick nod toward the bedroom I turned. I eased into bed, to the heavens I cry if temptation's removed I'll get thin by and by. 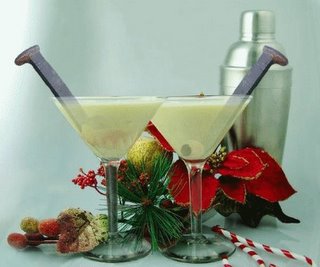 And what better to top off that big feast than a little spiked eggnog!

What a great story, and with spikes like that no one needs to ask if the nog has been.
Peace.